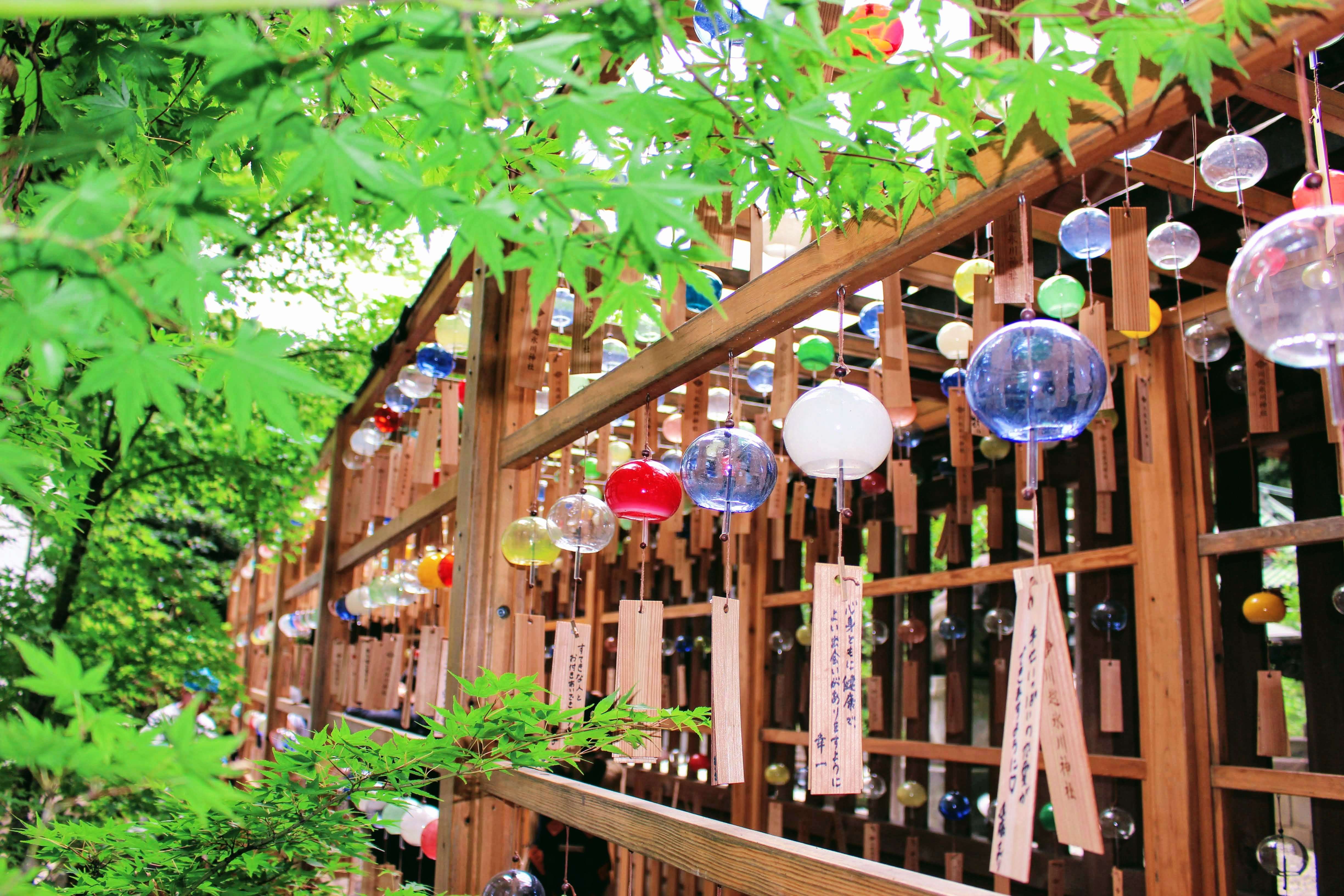 Our 2019 visit to the Wind Chimes at Kawagoe Hikawa Shrine. I have visited the wind chimes every year since their inception in 2014. They have evolved during the years! For example, in recent years they now light up the wind chimes at night and have a glistening river. The colors are different some years too. And the size of the display has grown over the years also.

Will Kawagoe Hikawa Shrine have wind chimes in 2021?

Yes, the wind chimes are currently set to start on July 3rd 2021. An end date has not yet been decided. Furthermore, its not yet known if they will also have their night light up event too. The latter was cancelled in 2020 even though the wind chimes were on display – but for a shorter period than normal.

Our 2019 visit to the Kawagoe wind chimes

…or at least it felt like it, for a glorious hour while visiting the 2019 wind chimes at Kawagoe Hikawa Shrine today. The temperatures aren’t actually that high at 25 degrees, but the sun was out. Something we haven’t seen for a while.

If you live here, you are all too aware that we have had non stop rain for the last few weeks. If you are planning to visit from overseas: bring a rain coat! For while the rain took a respite today, it will be back later in the week. And some are saying it will stick around for a further two weeks. We are having a long rainy season this year. And unlike other years, it has been fairly consistent rain too.

What to see in Kawagoe in Summer

With the sun today, came the tourists. I think they’d probably come hail, rain or shine. Such is the fame and popularity of the Hikawa wind chimes since their inception in 2014. Among today’s visitors (and there were dozens of them), several were clad in Japan’s finest traditional summer garb of yukata. There were some kids in jinbei too.

Wind chimes have actually long been associated with summer in Japan. So for me, between the colourful chimes and initial sightings of yukata and jimbei in 2019, it really felt like summer for the first time this year. Today, was very calm so they weren’t actually chiming. But when I visited in 2015 they were and I took a short video.

This year there was actually a display of wind chimes (and pinwheels) in May too. They were in celebration of the outgoing Emperor and the ascension of his son. They were my favourite to date in solid red and white colours. They have kept the red ones displayed in one area as a backdrop of a photo spot. Some of the pinwheels are also on display by the tunnel of prayer votives.

The main summer wind chime displays are however the usual selection of multi coloured chimes in no particular pattern, that I can discern anyway. The main displays are at the stone torii entrance to the shrine grounds, by the walkway to the kaikan and down the side of the main temple that leads to the wedded trees.

Like last year, there are also a few displays with just transparent wind chimes. And by the small river they have balls made of a reed like material with one to four wind chimes encapsulated.

There are various ways you can pay homage when you visit Hikawa Shrine. Such as praying in front of one of the temples or enshrined stone or trees. You don’t have to give money to do this, but it is customary to deposit even just one yen in a box or near the sacred artifact before you pray.

There are also some additional blessings, services and charms you can pay for. For example, you can buy a prayer votive plaque, write your wish on it and hang it. Another example is that, like most shrines, there are several different types of amulets you can purchase. The list is quite long, but I wanted to mention three of the more unusal ones at Kawagoe Hikawa Shrine:

To tell the truth I don’t know when they introduced English omikuji religious fortunes at Kawagoe Hikawa Shrine. For years they didn’t have them, and then one day they did. It is a really nice gesture from the shrine and even though I hadn’t planned to do omikuji today I bought one! They are 300 yen and you get to keep the red fish they come in.

The english omikuji are just in a plain box, but there are different types of omikuji in the Japanese language. Including the popular attraction of fishing for omikuji. The fish are all different colours and you use a rod to hook one of your choice. They introduced the fishing omikuji around seven years ago. It used to be seasonal, but they tend to have it available all the time now. The pastel colours were introduced a couple of years ago.

You can purchase a paper doll to float down the small river on the grounds. It even has the shinto shide and shimenawa that indicates this river is believed to have a diety. And the act of sending the doll down the river is a purification ritual to release you from your sins.

Apart from praying, devoting and / or admiring at Hikawa Shrine there is not much else to do. The shrine very cleverly came up with the wind chime event as a way to attract more visitors. It worked a charm, if you’ll pardon the pun! And is now one of the most popular places to visit in Kawagoe in the summer.

The 2019 wind chimes in Kawagoe Hikawa Shrine started this past Saturday, July 6th, and will run until September 8th. Click here to be brought to the event information in English that is updated annually.

The shrine is open from 9am to 9pm. The illumination starts from 7pm. The cafe next door, Musubi cafe, offers seasonal sweets in association with the event.

You can walk from Hon-kawagoe or Kawagoe stations along a tourist route, but it takes about 40 minutes. There is a tourist bus or a regular bus that will bring you close. There is free parking for 300 cars split between three car parks.

You can take a video tour of the wind chimes at the shrine at the official website: https://www.hikawa-fuurin.jp/

Getting to Kawagoe from Tokyo

From Ikebukuro on a semi express it takes about 30 minutes to Kawagoe station on the Tobu Tojo Line. The fare is 470 yen one way, but there are tickets and day passes you can buy too.

From Shinjuku it takes about 45 minutes to Kawagoe station on the Seibu Shinjuku line. Up to date routes and fares are available o hyperdia.com.

Hikawa Shrine on this blog

During the wind chime period they also normally have their Tanabata “Star” Festival. It is held annually on the 7th of August.