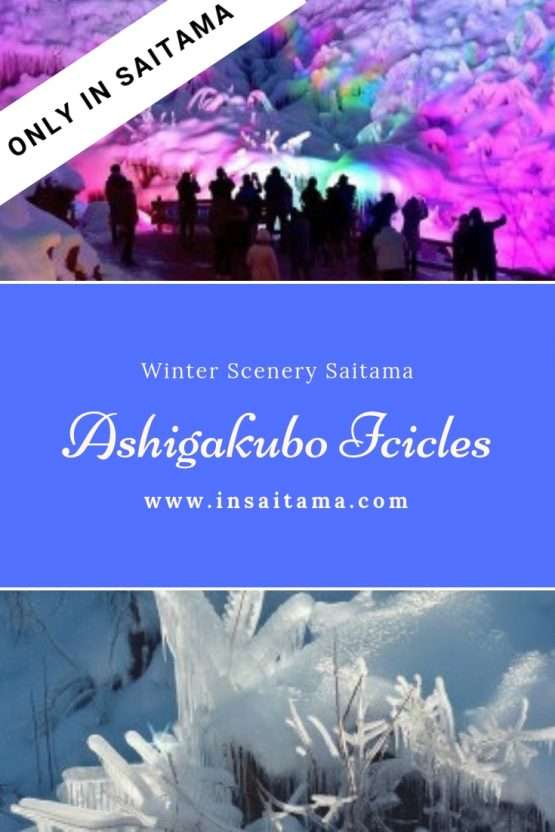 The Ashigakubo Icicles in 2022. The icicles are generally open to the public from the first week in January to the last week in February. Yokoze town generally release the expected dates around mid December. All things equal, they will probably be open to the public from around January 8th to bank holiday Wednesday February 23rd 2022. But please note, there are years when the weather interferes! For example, in 2020, due to warmer than normal weather, the the event ended up starting late and ending early. In 2021 they started on time, but finished up early also due to warm weather melting the icicles.

The Ashigakubo icicles are the baby in the family of the “3 great icicles of Chichibu”. They were only discovered six or seven years ago. Already they are attracting lots of visitors and lots of attention. They are not entirely natural – the locals help to create the scene in collaboration with Mother Nature! One of the icicles is 200 meters high and 30 meters wide.

In 2021 on account of the Coronavirus the organizers requested that people stay no longer than one hour. They also requested that you wear a mask and refrain from talking. It may well be the same in 2022. Furthermore, the (free) provision of tea and amazake was suspended in 2021 and that will probably be the case in 2022 too, in a bid to prevent the spread of coronavirus.

Another big change last year was that if you wanted to visit on a Saturday, Sunday or public holiday between 1 and 7 pm you needed to make an advance reservation. Tickets cost 300 yen per person. It is too soon to tell yet, if that will still be the situation in 2022.

Early January to February 23rd annually. Light up is usually on Fridays, Saturdays, Sundays and public holidays. Normally they light the icicles up from about 4 pm and they say the best viewing of the light up is around 5.30 pm during January and after 6 pm in February. Awaiting official details for 2022. In 2021: the dates were Friday January 8th until Tuesday February 23rd, which is a public holiday in celebration of the Emperor’s birthday.

The three great icicles of Chichibu

Ashigakubo Icicles are just one of “three great icicles of Chichibu”. The other two are Misotsuchi and Onouchi Icicles. Misotsuchi are the only completely natural icicles of all three. Although all three are in the Chichibu area, they are very far apart. It takes about an hour to get from one to the other. But if you are travelling by car you can in theory visit all three icicles in the same day.

The location is easier to get to than the better known Misotsuchi Icicles in neighbouring Chichibu, as unlike Misotsuchi these icicles are located relatively close to a train station. The Ashigakubo station, which is on the Seibu Chichibu Line, is about a 15 minute walk from the icicles. Google MAP and contacts in the grey details box at the bottom of the post.

Japan Travel have a detailed and enthusiastic report of an outing to the icicles ( When I first wrote about the icicles I had no affiliation, but I do write for Japan Travel now! I linked this article before I worked for them).

2021-10-05
Previous Post: Seasonal blooms and Halloween at the scenic Marigold Hill | HONJO
Next Post: 10 things to do in Kawagoe with kids