In: SHRINES & TEMPLES, Things to do in Saitama, ZOO / FARM
Tagged: Chichibu Area
With: 5 Comments 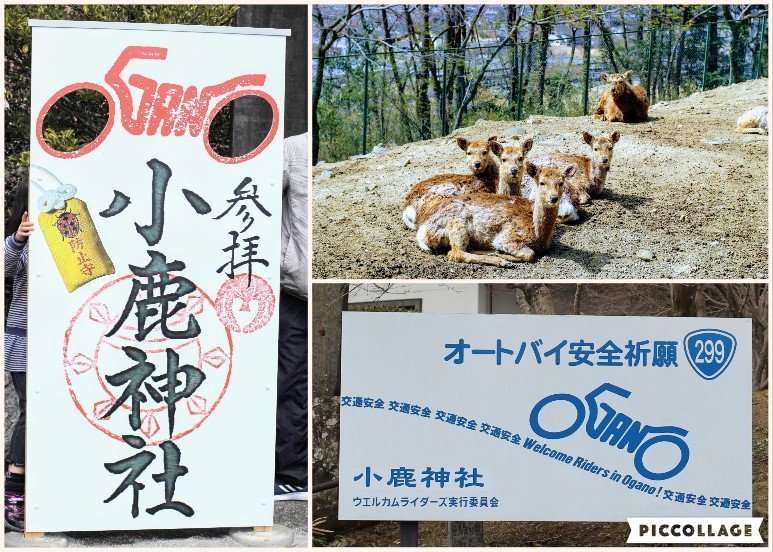 Ogano Deer Park is a small animal park on the site of Oshika shrine, more commonly known as the biker’s shrine. Ogano is named for the deer in the area, it quite literally means “small deer field”. Ironically, the area is not that well known for its deer, but is best known as a biker friendly town. They have signs all over the rural and picturesque town welcoming bikers.

The park is located on the side of a hill. There are only about 20 deer at one time. You can walk right along two sides of the deer area to view the deer from behind a fence. But you can not walk in among them. However, there is a makeshift platform made of bricks near the entrance that you can stand on to get a clearer photo of the deer.

You can feed the deer for just 50 yen. It is self service. There is a box with the deer feed in it. And also a money box beside it to insert your 50 yen. Along the side of the fence near the main gate, there is an area with homemade feeding shoots that you can slide the feed down. Alternatively, you can throw it in through the fence.

There really isn’t much in the deer park itself. There is a small playground between the deer park and the shrine with swings and a slide.
The area is quite pretty throughout the seasons.

The kanji for the shrine can be read many ways. Recently people are calling it Oshika, a literal reading of the kanji for little deer. But officially the shrine is called Ogano shrine. They accept Okano too. Unfortunately, it is harder to find it on sat-nav as Ogano though. It will come up as “Oshika shrine”.

I don’t know which came first: the deer park or the shrine, but as the name of the town implies, deer have been wild in this area since the beginning of time! Up in the hills of Ogano and neighbouring Yoshida you can sometimes see deer wild in the woods.

The shrine is quite photogenic with a large red torii and red lantern light posts. Moreover, you can often see some classic bikes at this shrine! The reason being it is frequented mainly by bikers. In the short period of time that we were there more than two dozen bikers came and went. And anytime we drive by there are always at least a couple of bikes parked.

Incongruously, the very cute amulets of the shrine have a ladybird motif. Maybe there is some connection between bikers and ladybirds that I am unaware of? Please do share in comments if you know what that is!

All along route 299 in Ogano town you can see signs welcoming bikers to the town. Furthermore, the signs are even written in a motorbike emblem. They write both “o” of Ogano as tyres and the “gan” like the seat of a motorbike. In addition, at the shrine they even have a photo prop with the “O”s cut out for you to pop your head through (first photo under Ogano Shrine heading).

There is no official site for the deer park. Moreover, it doesn’t even feature on the town’s official tourist site.

Hours: Open Tuesdays to Sundays, closed on Mondays. It is open from 9 am to 4 pm except in winter when it closes at 3 pm.

Parking: at the Oshika shrine

There is no independent website for the shrine, but it is listed on a generic Saitama shrine website here. In addition, on the Ogano tourism website there is information for the festival on the 3rd Saturday of April (Japanese language).