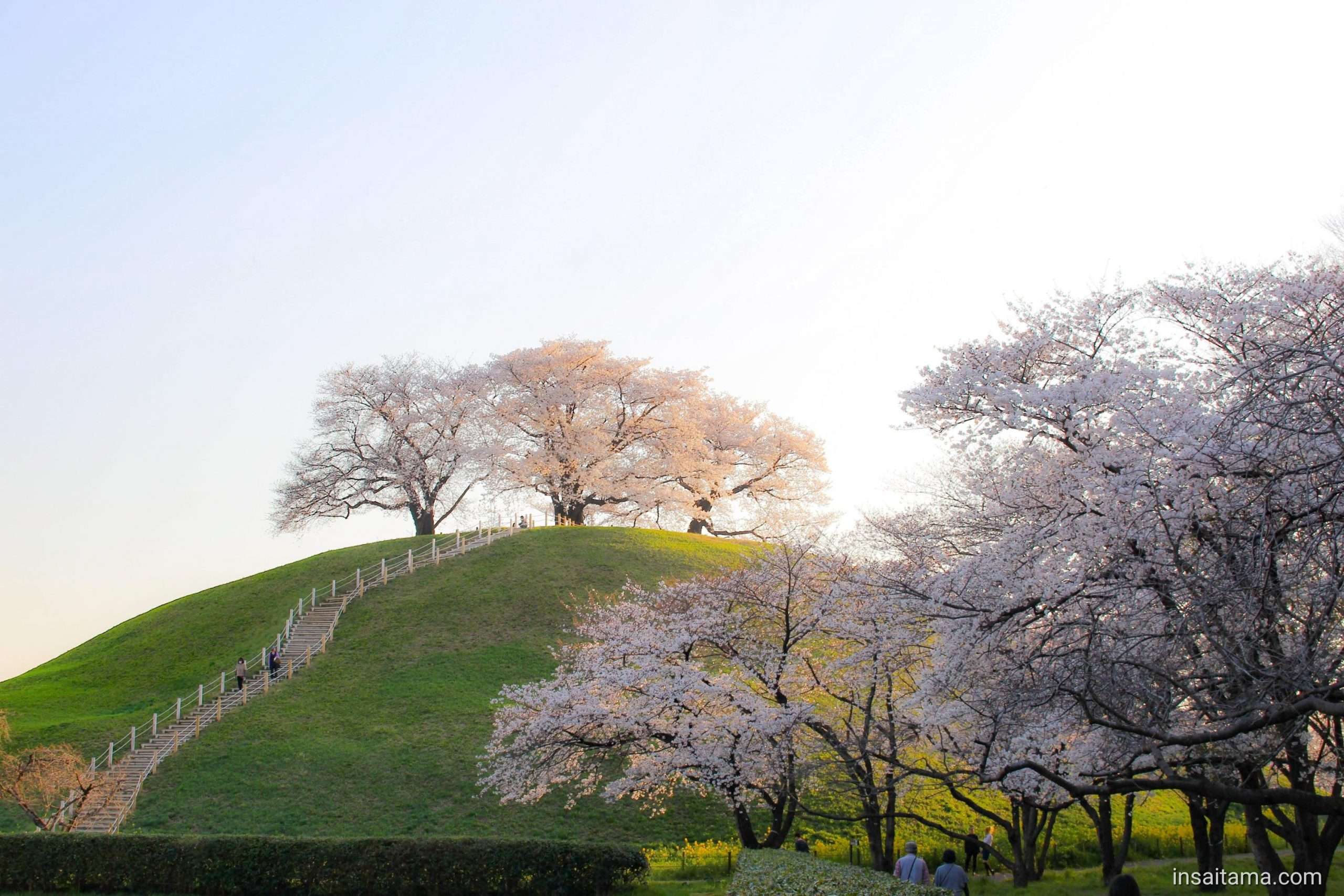 Sakitama Kofun Park is a medium sized park designed around the ancient burial mounds unearthed at the site. Kofun is the Japanese for burial mound. There are nine burial mounds in the park, including two you can walk up and over. One of those two is acclaimed for its stunning cherry blossom trees.

Maruhakayama Mound is the mound that has cherry blossoms on top. It is the only circular “kofun” in the park, the rest are keyhole shaped. It is not only the largest mound in the park, it is famed for being one of the largest in all of Japan.

There is an avenue of sakura leading up to the south stair case on the mound. Throughout the year there are two resident food vans at the entrance to this sakura avenue. Around the base of the West side of Maruhakayama Mound there are also mature cherry blossom trees.

To the east of Maruhakayama is the Inariyama mound, which is the other mound you can climb atop of. The Inariyama mound is also famous throughout Japan as important national treasures were found at this site. You can view some of the relics found at the site at the museum on the grounds.

Inariyama is the main burial mound at Sakitama and the oldest too. It is estimated that it was built in the late 5th century. There used to be an Inari shrine on the top of the mound and that is how it got its name “mount Inari”. The Inariyama mound is about 12 meters tall. It affords great views of Gyoda, the park and its neighboring Maruhakayama mound.

The Shogunyama mound is another mound of interest at the park, because you can enter the mound. They cleverly built an exhibition hall into the side of the mound. From the West side of the mound you wouldn’t even know it was there. There is a nominal charge into the mound, which opens museum hours from Tuesday to Sunday.

This mound has haniwa on it. Haniwa are terracotta clay figures that were buried with the dead during the Kofun period. They were found in the Inariyama mound dig. The mound has wild rapeseed growing on it that bloom in bright yellow in the month of March annually.

The six other mounds are:

There is a large green area as you come into the park which you can use at your own leisure. It includes a roofed area with picnic benches and sinks for washing dishes. There are vending machines in this area. And toilets, one of several throughout the park. There is also a water fountain. There are a few cherry blossoms in this area.

The area south of both the Maruhakayama and Inariyama mounds has beautiful cherry blossom trees, including a couple of a rare variety. There is a green area where you can picnic and play.

Adjacent to the park, but on the far side of the road, there is the Museum of the Sakitama Ancient Burial Mounds. Just down from the museum there is a side entrance to the park with a beautiful avenue of cherry blossom trees. Teppoyama Mound, which also has cherry blossoms around its base, is on the walk from here to the main mound area.

The nearest train station is quite a walk away, but there is a free city loop bus that goes from Takasaki Line Gyoda station and get off at “Sakitama Kofun Koen-Mae”. There is also a bus from Fukiage Station that goes relatively close. The bus comes around every 15 minutes during peak hours. It takes about 30 minutes and then a 15 minute walk.