In: Learn in Saitama, Museums
Tagged: Iruma District, something different
With: 10 Comments 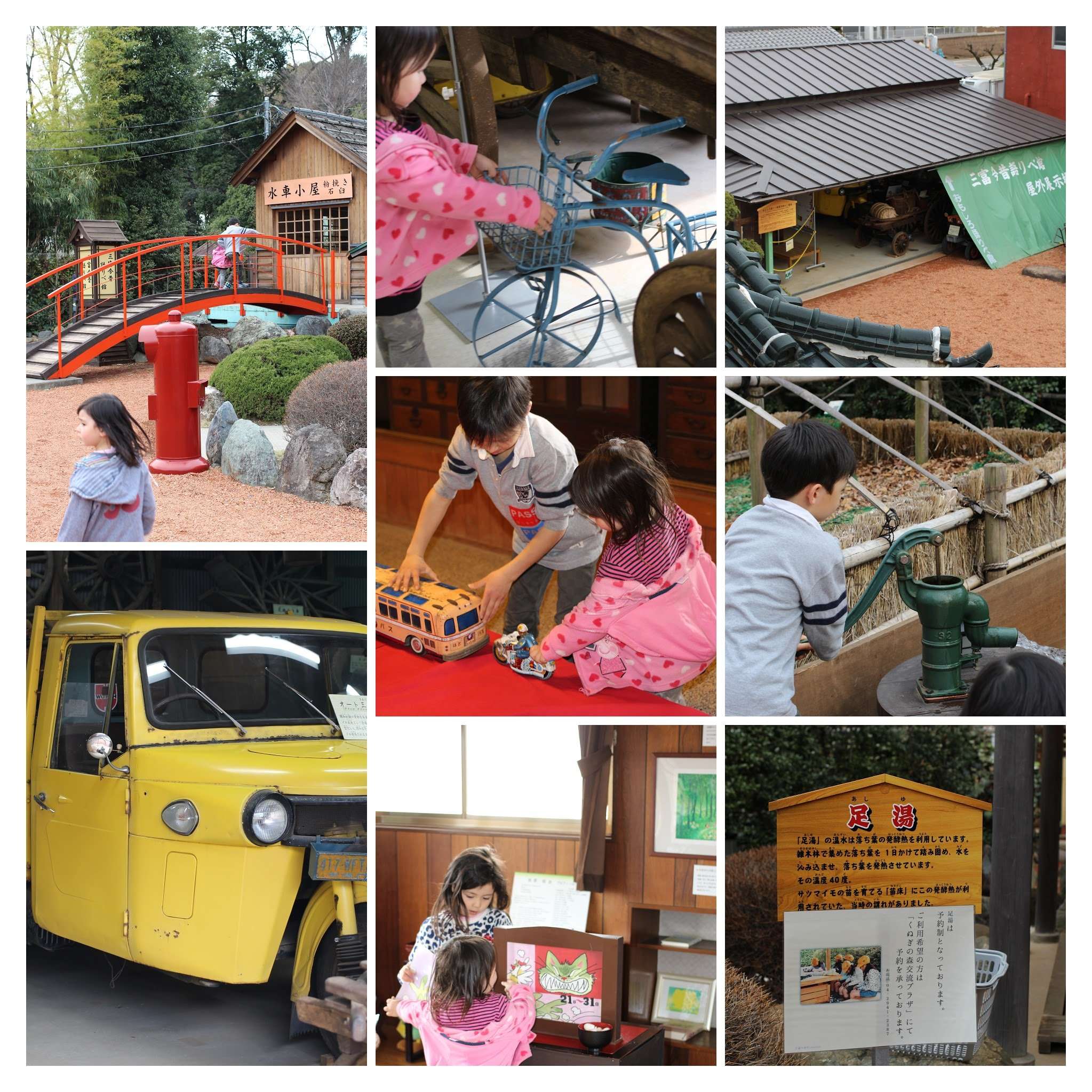 This is the third part of a four part series about the rather unusual and entertaining Santome Village (Santome Community) in Miyoshi Town, Saitama. It is also referred to as Konjaku Mura. In this segment, I introduce the Kunugi no Mori Environmental School and what Ishizaka has called an “Amusement House” in English. But it translates more easily as a storyteller or storytelling museum. The museum is covered by the general admission fee of 500 yen for an adult (children free) into the Santome Village / Konjaku Mura.

Santome have a couple of English maps with this feature listed as an Amusement House which doesn’t do much to describe this place.  In Japanese it is called a Kataribe Kan. Kan, although not literally as a stand alone character, means museum. And ultimately that is what the Kataribe kan is: an old house turned into a museum displaying household and farm goods from previous eras… as well as taxidermied animals (eek!) and a foot spa!

Kataribe means “talk” in English, but the etymology of the word is more indicative of why it was selected for Santome’s museum. Kataribe were a clan of professional narrators of legends and folktales in the service of the Imperial court in bygone days!  And the 2nd floor of the museum is used for traditional kamishibai storytelling.

As the Santome village is quite diverse and we hadn’t read up on the system before we visited (more on the system in part 1)  we actually missed this little gem on our very first visit. With the result the next time we visited Santome the kids spent more time at this museum than I had anticipated. It was a great break for me as they entertained themselves freely with little to no interference from the one staff on that day. The storytelling museum is quite small though so I would plan it as just an hour of your day at the Santome village.

The staff (like all Santome staff) was friendly yet professional. He did come over to help the kids fill the water pump so they could pump to their heart’s content, but other than that he didn’t interfere and the kids were able to run amok. Not just my kids for the record! Despite it being a museum it is not stuffy, if you’ll pardon the pun, and kids can relax and have fun both in the house (museum) and grounds.

Outdoors at the Storytelling Museum

Filling the outdoor pump was one of the four highlights of the visit to the storytelling museum for my kids. The other three were the foot spa, the Showa period toys you can play with and the top of their list: the kamishibai. The well and pump are in the garden, as you might expect, where there is also a watermill and performance stage. Furthermore, this is where the foot spa is too, tucked away in a corner. The foot spa typically closes an hour before the rest of the village. They leave out clean towels for you to use freely to wipe your feet after the very relaxing (and very popular) spa.

On one end of the garden is a shed with showa, taisho and even meiji period paraphernalia . In addition, there is such a mishmash of antiques on display. Including for example, the 3 wheeled yellow van pictured, reminiscent of Del Boy’s iconic Reliant Regal in Only Fools and Horses. The 3 wheeled van has become somewhat a symbol of the museum, on Instagram anyway.

Indoors at the Storytelling Museum

The ground floor showcases a range of household items from previous eras including cooking utensils, household luxuries, clothes, toys and (regrettably) creepy taxidermied animals! We have been to the Showa museum in Ome previously, which didn’t engage the children because the toys on display were behind locked glass cases. At least in the storytelling museum they have a lot of old toys out for kids to play with.  The kids were quite impressed by some of the toys. There were even a few that they “wished” were available in “our era”!

You have to take quite a steep staircase to get to the 2nd floor which is smaller than the first. It is an open space with some art displayed and some information about anime. Moreover, they leave out a kamishibai theater and one story with props. They change the story periodically. Children can regale the story themselves or if you time it right you can enjoy the story being told by some of the staff of Santome.

The Kunogi no Mori Environmental School is in front of the Storytelling Museum, so you pass it on your way. As the name suggests, it is a type of school or learning space for environmental topics. Santome run a number of different educational activities, some of which are held in this school. The school can be booked by individuals or groups. If you are a school group, you can request an existing programme or work with the staff to create one. As an individual you normally need to join a scheduled workshop or lecture via online sign up. These generally cost money. For more information (Japanese only): https://santome-community.com/facility/environment/

Outside the environmental school there is a rest area with some chairs and a table. There is a small vending machine beside it with a limited choice of drinks, but it does sell water. If you are a smoker; there is an ashtray here. Thankfully it is away from where children are playing. I didn’t notice any other ashtrays in other parts of Santome except at the bus stop by the reception building. There are toilets on the other side of this building too.

Santome also run a number of open events during the year. Events include fruit and vegetable picking, cooking classes, rice paddie play, baking bread and more. Another post will follow on that in the future, but in the meantime if you read Japanese there is more information available here: https://santome-community.com/events/

Regardless of where you plan to play in Santome Konjaku Mura the first stop is always the main reception building “Koryu plaza”. Koryu plaza is where you pay and get your entrance sticker. It is where both the main car park and the bus stop is. The storyteller museum and Kunogi No Mori Environmental school are on the opposite side of the road to this area.  You have to walk through the truck access road past part of the plant (that isn’t on the plant tour). There is a tunnel you can use for safety and the trucks give way to pedestrians at the crossings.

You can get a bus from Fujimino Station on the Tobu Tojo line at the west exit rotary, for 「くぬぎの森交流プラザ」. It takes about 30 minutes to the plant. The timetable for the bus: https://santome-community.com/access/ (Japanese only).