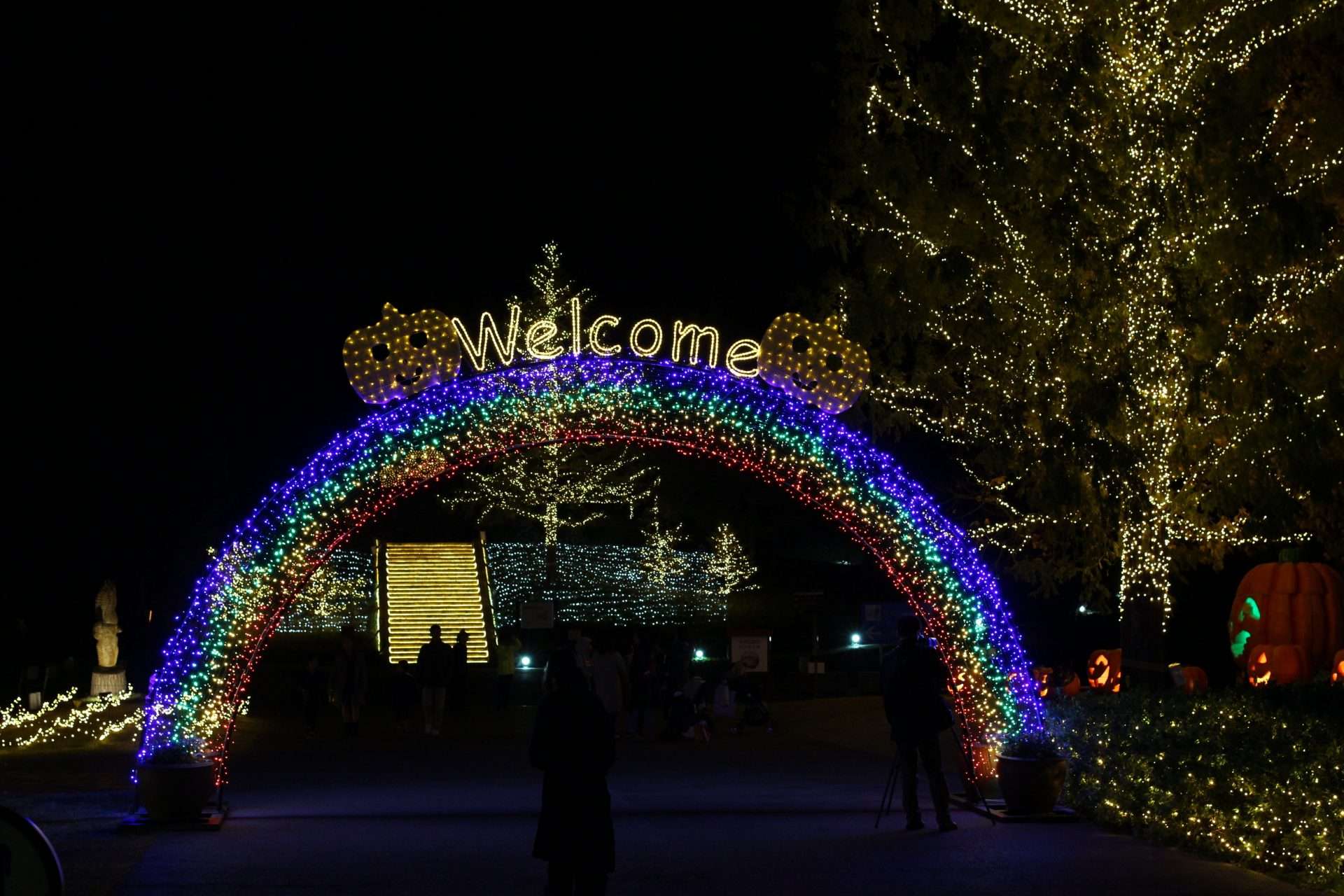 Shinrin Park (aka Musashi Kyuryo National Government Park) confirmed on September 6th, that they are planning to host their annual Halloween night in the Forest, despite the coronavirus. Whoop, I am so happy! They did last year too, for the record, and we were able to keep up our one of our favorite Halloween traditions as a family in Japan. We have visited almost every year since it started. It is so much fun for the kids to walk around a park at night. Especially one that has Halloween decorations!

Halloween night in the forest 2021

Approximately 500,000 lights are used in art installations depicting Halloween motifs. The lights are in the area around the central gate and the walkway to the botanical garden house. Both the central gate and botanical garden house have large displays. There is no additional charge for the event, but you do need to pay entry into the park. In addition, parking is charged, but at a reduced rate to day time. Its usually 300 yen for night time parking during the illumination events. (There is a shuttle bus too – more on that in information section).

In a normal year, if you come in full Halloween dress-up / costume you receive a sweet treat from staff. However, I believe this has been suspended due to the pandemic. Last year they gave us a badge instead, but there is no mention of that for 2021 at this current moment in time.

Each year they also have art installations and an art project on display for the whole period of night illumination called “Harmony with Nature”.  Also, they normally have craft workshops from 5 pm on most of the evenings that the night illumination is on. **These have not yet been confirmed for 2021** Reception for these events are on the day and you can’t book in advance.

They usually have free Halloween face painting the weekend before Halloween, but no information is online about that yet.  And as it is a weekday event this year, they may not have it. Also, there are live performances on most nights that the events are running. During the period they sell Pumpkin ice cream at the central gate. They also sell a Halloween dish at the arboretum. Last year, 2020, it was pumpkin soup.

Usually on the last Sunday night they also have a night time tree climbing event. This year, 2021, the information is not yet available. It costs 1000 yen per person and is limited to 10 people per session for children older than four years old.

In previous years parking was free after 5 pm in the central gate parking area only, but since four years ago they are charging ￥300 per car. However, only the central gate is open – all the other car parks will be closed at night.

Dates: weekdays only between October 18th and 29th.

Time: usually the park opens until 8.30 pm during the illumination but due to the Coronavirus it will close at 8 pm this year.

Cost: the Halloween event itself is free, but you do have to pay entry into the park as an adult. It costs 450 yen per adult. Children are not charged. Also, individual workshops and related events – such as treeing – are also charged.

You can get a bus from Kumagaya station and from the Tobu Tojo Line Shinrin koen station. The park have confirmed they will have a shuttle bus from Shinrin Station during the period of the night illumination. It is not free this year, it costs 200 yen for adults.

2021-09-21
Previous Post: Hanachozu week in GYODA
Next Post: Shukaido aka Begonia in the Hiki District of Saitama Prefecture