In: Play in Saitama, Things to do in Saitama
Tagged: Cherry Blossoms, Pool, River, Water play
With: 1 Comment 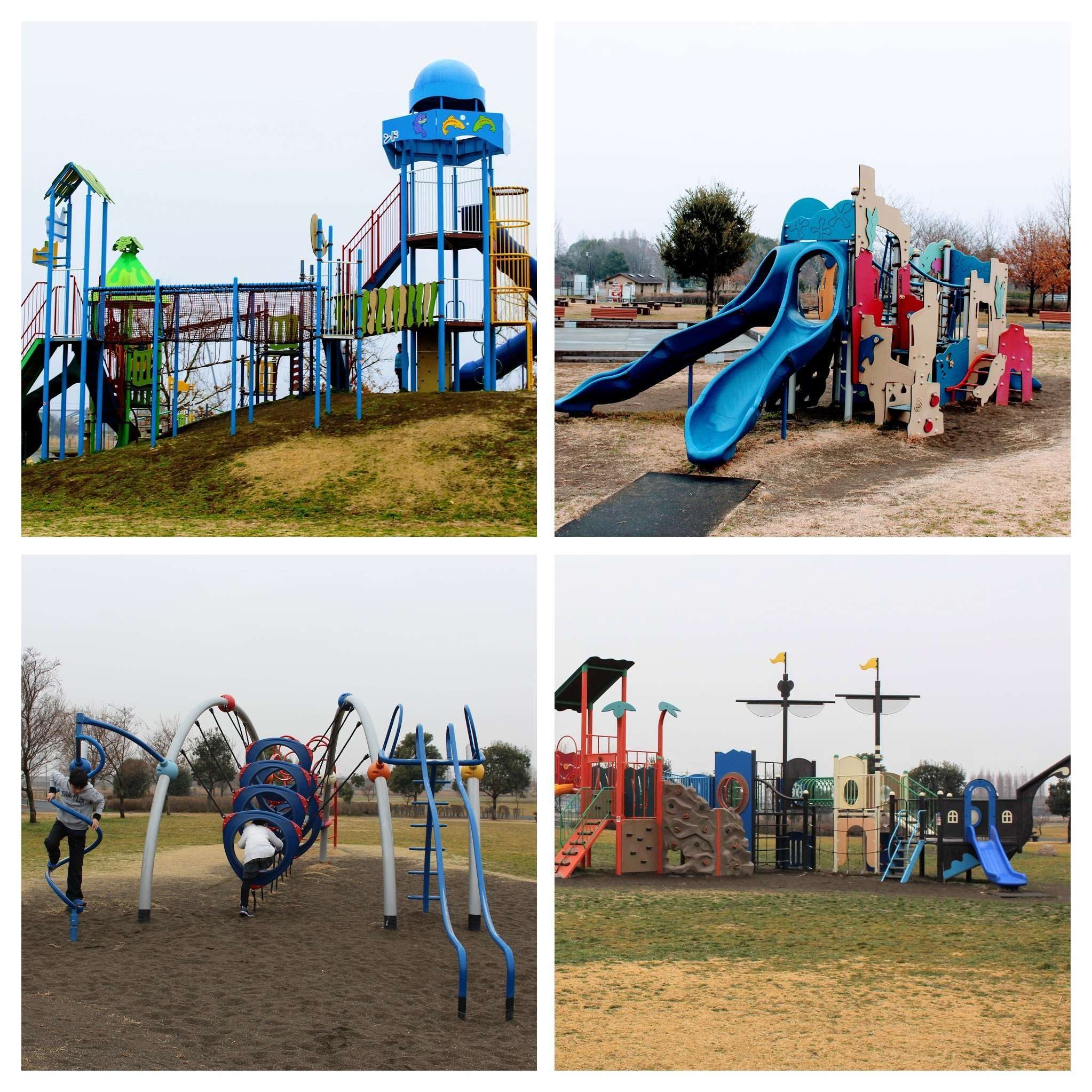 Hanyu Riverside Park – Hanyu Suigo Park – is a beautiful park alongside the Tone River in Hanyu City in Saitama. It is best known for three main reasons. One, the Saitama Aquarium is located in the park. Two, there are some stunning cherry blossoms in the park. And three, in recent years the park has been put firmly on the map due to the annual Yuruchara Summit of Mascots.

The playground at Hanyu Riverside park is a particularly large one. It is more like four playgrounds rolled into one. Each of the four has one main piece as well as smaller pieces:

One of the pieces of equipment in the playground is reminiscent of the type of playgrounds I grew up with in Ireland. This is the first time I have seen a piece of playground equipment like this in Japan. It is challenging enough for my older children age nine and ten. The age recommendation on it is from six to twelve years old. It looks like a spider.

Near it is another piece of equipment that looks – to me – like a mammoth! This one is for smaller children aged between three and six years old.

Beside the spider like play equipment featured above there is a great climbing wall. It is quite like the wall in the Saitama Museum of Rivers, only larger and more challenging. The age recommendation on the climbing wall is also six to twelve years old. My five year old found it very manageable and with supervision a younger child could also play on it. At your own risk of course.

Close to both the animal shaped pieces of equipment and the climbing wall there is large play area in the shape of a pirate ship. The age recommendation on it is for children from three to twelve years old, but I doubt a child over seven would be very interested in or challenged by it.

Another one that was challenging enough for my older two kids, although they tired of it quickly, and also suitable for the younger two – aged five and seven – is the “Kobaton” piece of equipment. It is a multi purpose piece with climbing and slides.

There are smaller pieces of equipment dotted around the playground. For example, spring rides, play equipment for toddlers and balancing beams and a small cave.

The playground(s) are located close to the cherry blossoms of the park. And as such it is a great place to do hanami with kids. Their cherry blossom festival is usually the last week of March and the first week of April. However, this year, 2020, the sakura are expected to bloom a week earlier than normal AND due to Coronavirus outbreak, there will either be changes to or cancellations of planned events.

The park also has late blooming sakura that typically bloom in mid April. There are several different seasonal blooms throughout the year in different parts of the park. The sunflowers in July and August have been enjoying increasing fame in recent years. There is also a landscaped garden on one side of the playground and plum blossoms on another. However, the plum blossoms were only planted in recent years so their bloom isn’t that impressive yet.

There are several water features in Hanyu Riverside Park, including a lake, marsh and rivers. Hozoji Pond / Marsh, the body of water closest to the aquarium, is a bird sanctuary and home to a critically endangered plant species. Supposedly there is Mujinamo in the park too. Mujinamo is an insectivorous waterwheel plant which used to be a national natural treasure of Japan.

There is a lovely boardwalk over the water / marsh. It only has very low railings and is tilted on one end – something to note if you are there with toddlers.

The Saitama Aquarium is a freshwater aquarium with fish, amphibians and reptiles from freshwater bodies of water such as rivers and lakes. They have a really good collection including pretty much all / any fish you can find in Saitama and more unusual species from overseas too. For even more information: