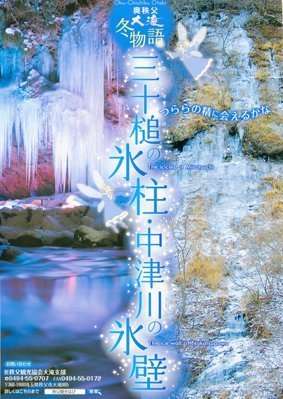 The Otaki Ice festival, illuminated Misotsuchi Icicles in 2022 – One of the most famous, and beautiful, winter scenes of Saitama is at the Otaki Ice Festival. Located in the former Otaki village (now part of Chichibu city) in the Chichibu-Tama-Kai National Park. The Misotsuchi Icicles are the only naturally formed icicles of the three Great icicles of Chichibu.  They light the icicles of Misotsuchi up at night. Each year for about a month you can enjoy this spectacular view in Chichibu, the mountainous area of Western Saitama.

It may seem a little early to post about the Misotsuchi icicles, but I can see on my blog analytics that people are already searching for information about them. Moreover, the Otaki Ice Festival was one of only a few January events that went ahead in 2021 despite the Coronavirus and a State of Emergency. However, please note, between 2019 and 2021 weather patterns have significantly impacted the formation of the icicles. We won’t know until early January 2022 whether or not the icicles will form. Moreover, they never release the dates for the festival until shortly before the festival begins, so do check back closer to the time. I am optimistic given how early Autumn came this year that it might be a long cold winter and we’ll be able to see the Misotuchi Icicles again in January and February 2022.

The Misotsuchi icicles form completely naturally. The main display are neither altered nor aided by human hands. The icicles form from spring water bubbling from the rocks aided by the winter environment of the Okuchichibu region. The icicles are ten meters tall and thirty meters wide! They look spectacular when lit up at night, particularly with the lights reflected in the water. They use four different colors to represent the four seasons of Chichibu-Tama-Kai National Park.

On the south side the entrance (and parking) is at the Tsuchiuchi Camping grounds. It is further and harder to get to. However, Tsuchiuchi campsite have even more icicles – man-made, but equally impressive. They are 25 meters high and 55 meters wide. (You can see them from Woodroof too). Also, Tsuchiuchi serve hot food and drinks during the period of the Otaki ice festival. Please note that neither campsite take over night guests at that time of the year (season is from April to October).

Misotsuchi Icicles – The date for viewing the 2021 icicles was January 8th to February 23rd, but the icicles were actually gone from around early February. During the period the area was accessible from 8 am to 5 pm daily. From January 16th to February 21st hours they extend the hours for the light up. Generally, on the last two Saturdays of January they also have a market during the day.

Misotsuchi Icicles Light up – again 2021 information to give you an idea of what to expect in 2022: From January 16th to February 21st the icicles were lit up from 5 pm to 7 pm on weekdays. On the weekends you can normally see the illumination until 9 pm. However, in 2021 the light up finished at 8 pm on weekends due to the State of Emergency.

Cost – The entrance fee in 2021 was the same as previous years – 200 yen for adults or high school aged children. There is no charge for younger children.

The Misotsuchi icicles are one of the three icicles locations in Saitama. The other two are Ashigakubo and Onouchi.

The icicles are the 47 kilometers from the Hanazono Interchange of the Kanetsu expressway. The parking costs are generally 500 yen per car, 200 yen for a bike and 1000 yen for a bus. The Tsuchiuchi Camping Ground open their car park to the public during the period of the icicles. The camp ground itself closes for the season and will open around the end of March or early April.

From Chichibu Tetsudo Chichibu Main Line Mitsumineguchi station take a Seibu Kanko bus headed to Lake Chichibu 「秩父湖」 . The “Misotsuchi” bus stop is the closest bus stop to the icicles. It is on the North side of the river.

Misotsuchi Icicles access from Tokyo:
Take a limited express train from Ikebukuro to Seibu Chichibu station, from there its about a 3 minute walk to Chichibu railway Mitsumineguchi station from where you get the bus.

Other icicles that are illuminated in the area:

For more ideas of what you can do in Saitama in Winter: