In: ACTIVITIES, Autumn in Saitama, SHRINES & TEMPLES, Things to do in Saitama
Tagged: Hiki District
With: 0 Comments 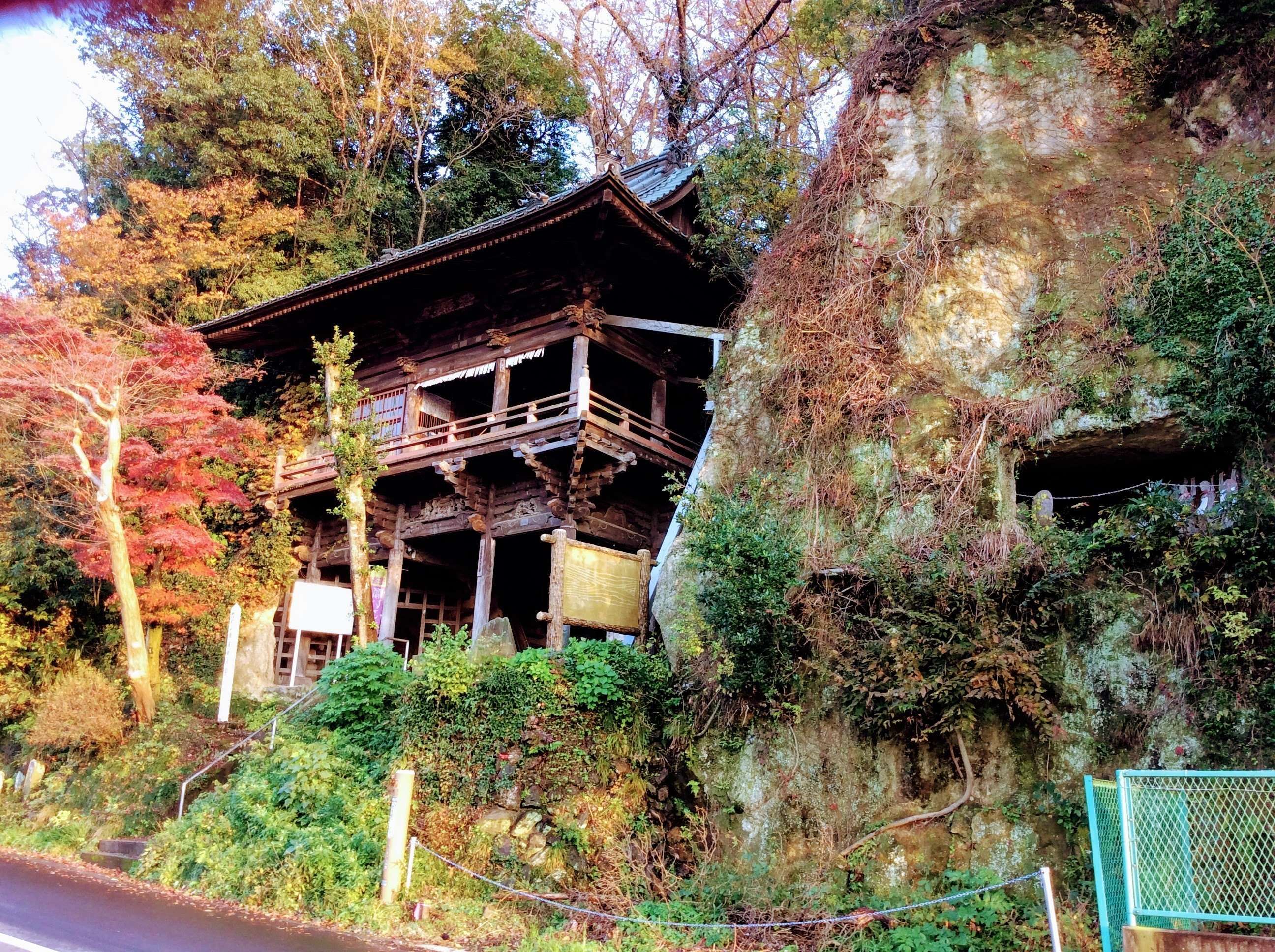 One of my friends famously said “If you’ve seen one temple, you’ve seen them all” and there is a truth in that. However, I am quite “into” temples (and shrines). And for me, the magnificence of a temple doesn’t always lie in its appearance, but rather in the history and meaning. In fairness to my friend, many temples do look very like others. And some are very plain and, frankly, quite disappointing to the naked eye. But there are many that are both aesthetically pleasing and have a fascinating back story.  Then there are those that are different; that stand out for either their background or their architecture or both.  Iwamuro Kannon is, in my experience, one of those temples. And it is breathtakingly beautiful to boot.

Located on the side of a cliff right by the side of the road, the temple is intricately positioned between two rock fronts. This type of style is called gakedukuri (often written as kakezukuri) and it is a rare treat, especially in this part of Japan. It was built in the same manner as the Kiyomizu Temple in Kyoto. The ground floor of Iwamuro Kannon is actually part of the cliff.

The building of the temple is a beautiful wooden structure positioned on stilts. From my understanding, the temple was built without nails, using just the pillars to support each other and disperse impact. There is no door on the temple and you are free to climb the steep stairs to the first floor where you can look out over the Ichino River on the North End.

Eighty-eight stone statues, which are one appeal of the temple, are housed in caves within the rock. The stone statues are images of Kannon, the Bodhisattva of compassion. The temple is dedicated to this “Goddess of Mercy”. Furthermore, the 88 stones statues are based on the principal images of Saigoku (West country’s) 88 sacred sites.

It is said that the Japanese monk Kobo Daishi, also known as Kukai, picked the caves at the site of the Musashi Province Matsuyama Castle. He carved the first 36.4 centimeter Kannon statue. The temple and castle were destroyed in 1590. The current temple was built during the Kanbun period (1661 – 1673).

On the South end of the temple you see the steep trail that leads to the site of Matsuyama Castle. The temple was actually said to be a “karamete gate” – the rear gate of a castle. The only remnant of the castle is the moat, but you can view a diorama of the castle in one of the museums in the nearby 100 Caves of Yoshimi. You can exit the temple onto the trail.  On your right you will see a ladder leading to another Kannon. On the left a staircase has been dug into the incline, with a chain rope for support, so that you can climb up to and pass under the naturally formed passage that is shaped like a heart.

Once upon a time Iwamuro kannon enjoyed many visitors as the 3rd stop (of 33), and only one in Yoshimi, on a pilgrimage of Kannon statues in the Hiki district. The Kannon are said to have 33 forms they use when helping sentient beings, thus the Hiki West Country pilgrimmage has 33 stops. The temple is also on the Chichibu 34 Kannon pilgrimmage.

However, nowadays, the temple is virtually abandoned, making it pleasingly tranquil. On the south side you are enveloped by nature, but the temple is quite literally on the side of the road on the North end. That road is mainly used to get to the 100 caves and as such isn’t used much in off season periods. The lack of visitors would imply that in recent years it does not enjoy much appreciation, fame or reverence, but it impressed me greatly. It is well worth a stop, in my personal opinion, if you are in the area. And there is plenty to do nearby for a day or half-day of discovering Yoshimi:

Make a Day of it!

The 100 caves of Yoshimi are right by the temple and can be visited anytime of the year. If you are visiting in winter or spring you combine a trip to the temple with some strawberry picking in the nearby greenhouses. Yoshimi is number one for strawberries in Saitama.

Also, in spring, the nearby embankment of the Ichino river is pink with cherry blossoms. And they have a cherry blossom festival in conjunction with the 100 caves. Moreover, the stunning (and incredibly off the beaten path) Sakura Tsutsumi is not to be missed for cherry blossoms and rapeseed scenery.

Early summer is the best time to visit the Ghibli-esque “Herbal House” for a spot of tea in a country garden. But the excellent Natural Cafe Sora can be enjoyed all year round. Particularly if you are visiting with kids at they have both an indoor and outdoor play area young children will appreciate.

In early Autumn, you can stop by the cosmos fields by the Ichigo no Sato roadside station. They also have some scarecrows in September / October and a cosmos festival. And from mid to late September there are the most beautiful spider lilies at the aforementioned Sakura Tsutusmi. Later in Autumn, a trip to Hatchoko Lake Park and Yoshimi Kannon to see the autumn leaves will not disappoint!

Parking: Shared with the 100 caves of Yoshimi. FREE

Just over an hour from Tokyo.

By Car
5 km from Higashimatsuyama Interchange of the Kanestsu expressway, in the direction of Konosu.

If you are interested in learning more about Kannon, there is a very informative and extensive knowledge based shared on:
https://www.onmarkproductions.com/html/kannon.shtml