Kawagoe Hikawa Shrine by night in 2021 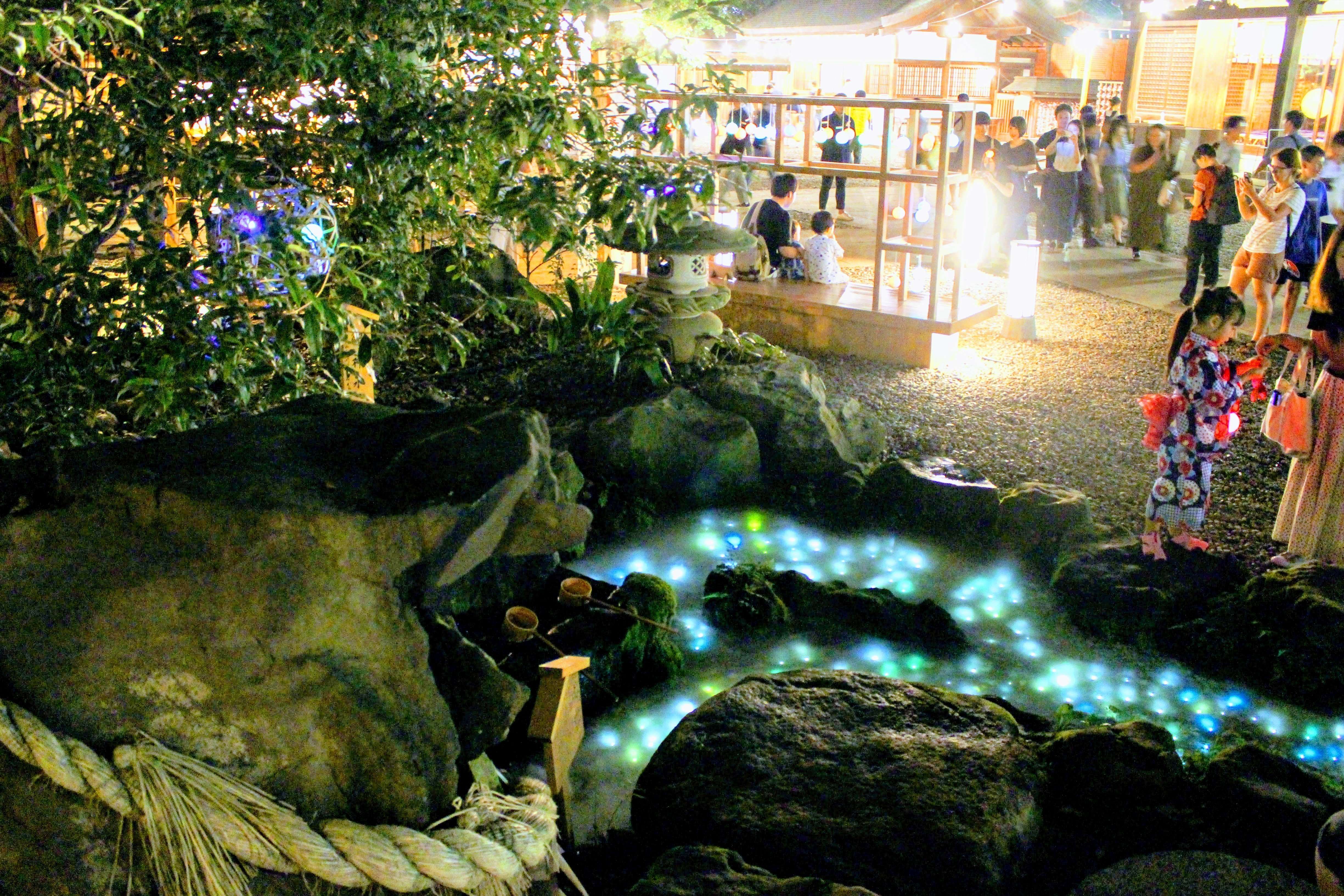 Kawagoe Hikawa Shrine by night – an illuminous “Hikaru Kawa”, glistening river, and wind chimes lit up at night. Legend goes that the Iruma River used to glisten at night. And the source was the Hikawa God. The Hikaru Kawa is a tribute to this legend, outlined below. All the photos in this post are from 2019. In 2020 the wind chime event went ahead. However, the night time events were cancelled. Thankfully the shrine intend to light up the wind chimes until 8 pm. And run the glistening river again in the summer of 2021. Unfortunately, they announced on June 30th that the glistening river will NOT be on in 2021.

Since 2014 Kawagoe Hikawa Shrine has held an annual wind chime event, which features on this blog. At the start of this summer I also shared a report for the 2019 event during day time. A few years ago they also started lighting up both the chimes and the small stream on the grounds of the shrine at night. Night time, in my humble opinion, is even more glorious. Particularly the “hikaru kawa”, glistening river, a stunning scene of light and colors, with a dash of the milky way thrown in. But first, the light up…

Throughout the year the shrine is normally open until 9 pm at night. However, in 2020 and 2021 due to the pandemic the shrine closes at 8 pm. In a normal year, they only light up the river during the period of the wind chimes. Unfortunately in both 2020 and 201 they decided last minute not to have the “glistening river”. The wind chimes will be displayed in 2021 is from Saturday July 3rd to Sunday September 5th. More on the glistening river aka Milky Way stream below the wind chimes.

Furthermore, the 888 wind chimes, a significant number in matters of love in Japan, are lit up at night. There are actually 2000 wind chimes in total at Kawagoe Hikawa Shrine, including the 888 in the main tunnel of love! Moreover, in 2019 they had just introduced new night time illuminous wind chimes “love lights” (koi akari in Japanese) that were displayed from the end of July to the end of August only. You could buy them as amulets too. However, due to their popularity I am sure they will be back in 2021 and hopefully this time for the full period of the event.

One of the main and most photographed attractions at the shrine is the “glistening river” / milky wave stream. The small religious stream on the grounds of the stream is lit up each night between 7 and 9 pm. They use projection mapping and dry ice to create the impression of the milky way. Unfortunately the event did not run in 2020 or 2021 due to the Coronavirus.

The legend of the glistening river

An old document pertaining to the history of Kawagoe Hikawa Shrine claims the reason the current site was chosen for the location of the shrine was due to a glistening river.

Legend says that from 1,500 years ago the Iruma river used to glisten at night. When the light source was followed it led to the site where Hikawa shrine now stands. As it was believed the light source was that of the Hikawa God, they chose that location for the shrine.

The Milky Way stream annual event at Kawagoe Hikawa Shrine is a tribute to the legend.

Cost: free to roam the grounds and take photos. If you wish to worship you can use anything from a 1 yen contribution. Omikuji, religious fortunes, cost about 300 yen on average. Amulets cost around 500 yen. Religious ceremonies and rituals have varying costs. As a guideline a 5000 yen donation or more is required for a ceremony.

Events at the shrine

The majority of the tourist buses, such as Coedo Loop bus, have a bus stop near the shrine. You can also get several different Tobu buses that will drop you near the shrine. It is possible to walk to the shrine from Tobu and JR Kawagoe stations, Tobu Kawagoeshi station or from Seibu Honkawagoe stations. It takes upwards of 20 minutes on foot from each.

If you are coming by car the turn for the shrine on route 254 is quite clearly marked. Since April 28th 2021 there is no official car park for Kawagoe Hikawa Shrine. The old “dai ni” car park is still there though. However, it is coin parking now. It costs 100 yen for 30 minutes.

Although, not officially a part of the shrine, the Shingashi River cherry blossoms are associated with Kawagoe Hikawa.