In: Seasonal, Things to do in Saitama, Winter
Tagged: Hiki District
With: 6 Comments 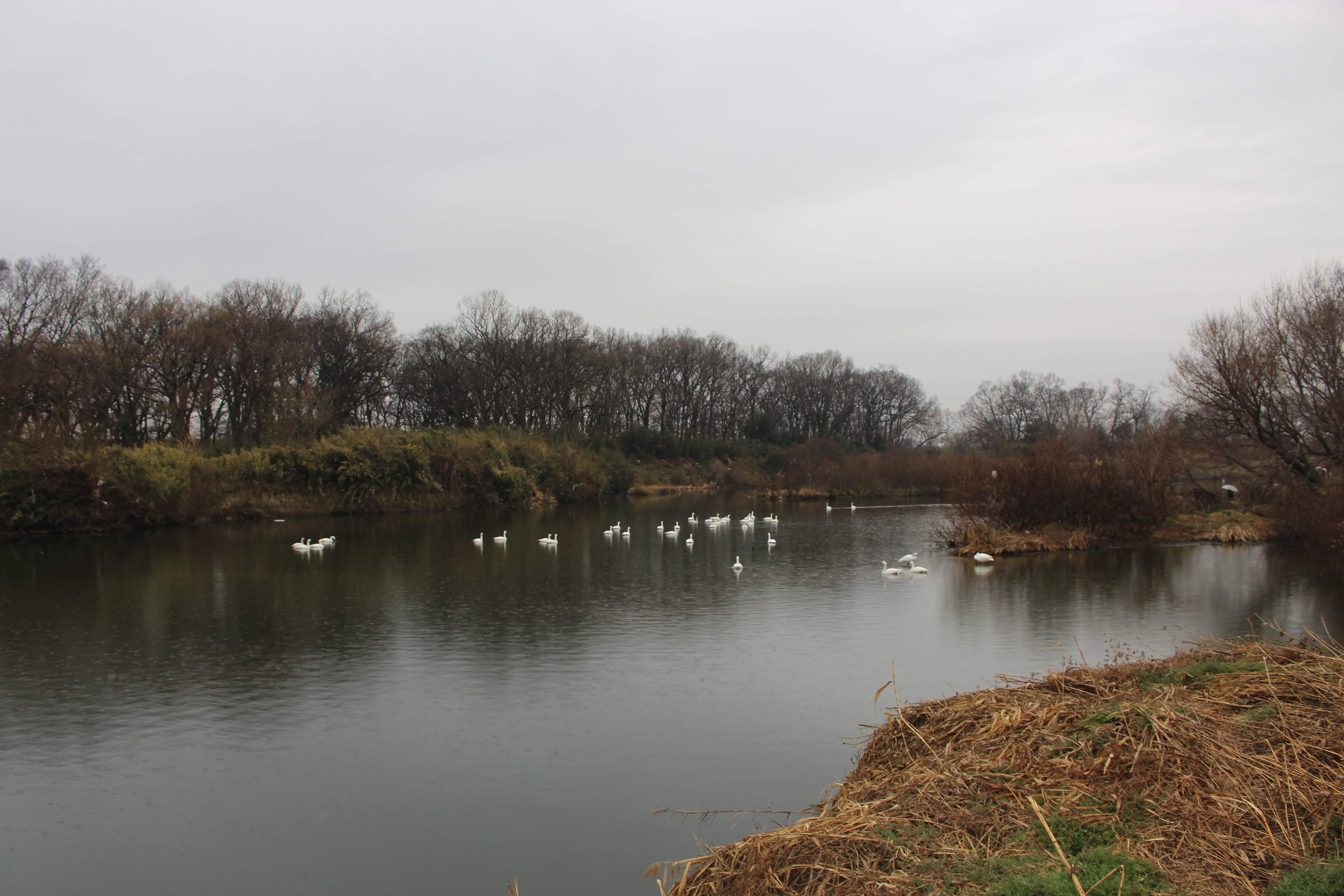 Kawajima Swans – October 14th update. Swan watch is on! The longterm weather reports and indeed the colder than normal Autumn to date are forewarning a colder than average winter in the Northern hemisphere. If true, the tundra swans will migrate from Siberia sooner rather than later. In recent years they’ve taken up their winter home in Kawajima from mid November. But in the past they’ve arrived in the last week of October. Will they honour us with their presence early this year?

The swans on the Oppe River in Kawajima have always been famous within certain circles. However, in the past, it was only avid bird watchers and swan lovers who made the journey to witness their majesty. Years ago, you’d only see one or two professional photographers hidden in the reeds, and so I decided not to write about them. Until now! The wild swans of Kawajima went viral a couple of years ago and are enjoying such fame that it is no longer the hidden and off the beaten track location it used to be. You’ll even find reviews in multiple languages on travel websites such as expedia and trip advisor!

The potency of Instagram and an increase in youtube videos and blog articles online have contributed to the increased fame of the swans. Two years ago the location was added to Google maps and there were just a couple of reviews. Today, there are 87 reviews.

The town hall also started to more openly promote the swans annual presence on the Oppe River in recent years. They even started a photo contest two years ago. All these things combined have led to an increase in visitors. Any day now I suspect they will offer tours, build a rest area and set up some food stalls, such is the increase in the number of visitors!

The people that do come though, come for the swans alone. As there is absolutely nothing else in the immediate vicinity, except for a handful of plum blossoms near the car park, and I personally hope it stays that way. The swans may not come back if the area gets too busy or buildings are erected. The number of swans have decreased over the years. Mitsui Seki, a nearby company, had counted over 200 in previous years. Today, I saw about 90, in about four different groups, but I don’t know what the official figures are for this year yet.

There are some attractions within commutable distance, such as the excellent Kinbue Soy Sauce Park only a 20 minute walk, as the crow flies more or less, if you use the levee. If you drive its about 12 minutes.

Toyama Memorial Museum which will have a hina display from this weekend (February 9th). A 6 minute drive away is a Darumaya, a restaurant famous for Sutatte udon. There are some more locations within a 15 minute drive shared at the bottom of the article.

Today, I was one of about twenty people in heavy rain in just one half hour slot of the whole day. As I was leaving there were more cars pulling up and a group of six making their way down the embankment. I have been visiting these swans for 11 years and I can tell you that this is the first time I have seen these numbers of people. There were people feeding the ducks that also live there. And I can only imagine they feed the swans too. This is a big no no for a preserve where the wildlife is supposed to live unaided by humans.

However, apart from a few feeders and way too many smokers leaving their butts on the gravel river beach, current visitors seem to be very in tune and respectful of the sanctuary. It requires great patience to see the swans as they fly in and out during the day. And it seems the visitors today had it in bucket loads. But it is worth the wait as it affords that opportunity to get a photo of them in flight, which, for me, is when they are most magnificent.

If you don’t have the time or patience to wait you can go back up on the man made embankment and walk down river to Hachiman bridge. Cross over to the Sakado side and walk until you meet the man made embankment on the other side. If you climb up you might be able to see the swans in the rice fields there, no guarantees of course. They are often up by Shimura Strawberry Picking Farm,a great farm for picking strawberries with children as they have play equipment. However, sometimes they fly off as far as the rice fields beside Toyama Memorial Museum to feed.

I have brought my kids with me in previous years. Only after I had given them implicit directions on how to behave when we were in the reserve area. They know not to run or shout or throw stones in the river. They know they have to whisper and tip toe and not get too close to the swans. They thrill in seeing the swans, particularly in flight, but the professional photographers are not always thrilled to see children! I get that. And I certainly wouldn’t bring them if I thought they couldn’t respect the ambiance of the location.

Growing up in Ireland, I took swans for granted. Not only can we can see them often, they are an important facet of Irish mythology. And all four of my kids have been up close and personal to them in Ireland. However, in this part of Japan wild swans are rare. And the swans in Kawajima are only there for a few months of the year. Usually from about November to March with prime viewing in December. Numbers peter off from February or March (depending on weather and other factors) as the swans make the 4,000 kilometre journey back to Siberia.

There is now even a car park open for people to use when visiting the swans. It is beside the back end of Mitsui Seki parallel to the river past Yahataundo Park. Mitsui Seki is easily identifiable by the shrine on its roof! There are toilets in the Yahataundo Park, which is not actually a park but a small baseball ground.

By public transport it is quite far, but pretty straightforward. You can get a bus from the east exit of Kawagoe station bound for Hachiman Danchi. You pass through Ichibangai, the main Kawagoe thoroughfare on the ride, which delays the journey greatly. Without traffic it is 10 minutes, but the bus takes 40 minutes most of the time. You get off in the danchi and walk down until you see the sign for the swans. It is about a ten minute walk to the turn and about five minutes from there.