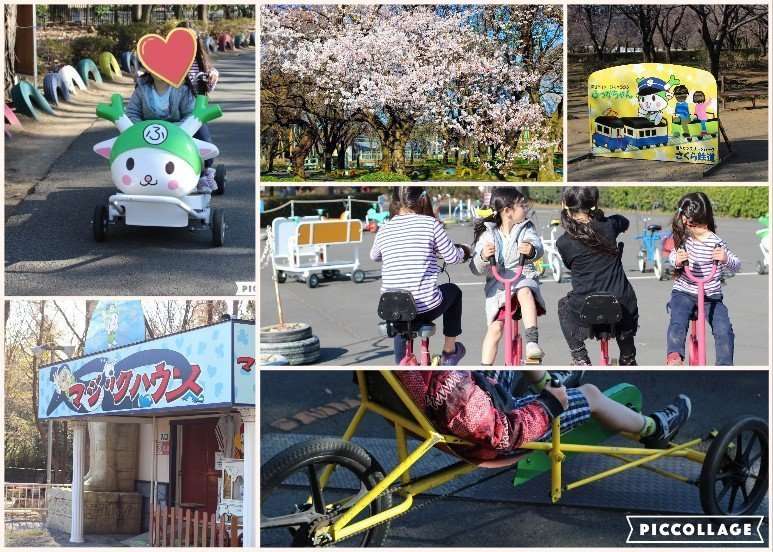 Kawamoto Sun Green Park in Fukaya is a quirky little park with some fun attractions. It is beside the Saitama Prefecture Agricultural “Norin” park. They are separated by a road, but within walking distance of each other. The area is particularly pretty in spring while the sakura are in bloom.

The attractions within the park include a bike park. It has a great selection of unusual bikes and pedal cars that people of all ages can try out. The park also has a mini steam locomotive train that winds itself through stunning cherry blossom trees. Another attraction is the putter golf course. There is a small haunted house on the grounds too.

There is a great selection of unusual bikes you can use during your half hour of play. Half an hour is not enough so it is unfortunate that they don’t have better plans. You can pay for a 10 minute extension, but it adds up.

You take the bikes around a 400 metre fixed course. There is a gradual incline in one place, which can be tough for young kids or if you are ferrying kids! Other than that, it is a pretty easy course and very scenic in spring.

The have bicycles for one to multiple people. They even have a bike that fits around 7 people – four people peddling and a further 2 or 3 as passengers. The bikes are so varied with lots of very unusual styles, some of which I’ve personally never seen anywhere else. Not even in Musashi No Mura or Kazo Hanasaki Park which both have similar bike and pedal car play areas. They also have some rides with the mascot of Fukaya “Fukkachan” on them.

My kids and the other two families we were with really loved this bike park and they are itching to go back. Even my 9 year old boy, who has outgrown many other play areas, thoroughly enjoyed our time in the park. We ended up playing for an hour and they easily would have played for double that.

The course of the mini steam locomotive in Kawamoto Sun Green Park is shorter than the one across the road in Norin, but in spring the course is absolutely stunning. The Sakura Railway is thus named as it winds its way through cherry blossom trees. An attraction of this mini steam locomotive is that children older than third grade can actually drive the train.

It is a 9 hole putter golf course. It is actually one of only a few places I personally know of in Saitama, where young children can play putter golf.

I didn’t actually go into the magic house, but some of the kids did. They said it was scary and things pop out, but they wanted to go in again! It’s quite small, but evidently kids like it.

The barbecue area needs to be booked in advance and can’t be booked on the same day. If you get the “table” set they provide the grill and charcoal. The area is a very nice space, with much of it in shade.

Cost: You can pay per person – 400 yen per person (children under 6 free) or you can pay for a table which works out cheaper if there are more than 2 in your group. A table costs 1000 yen for the space and up to 10 people are allowed at that price. It includes all the equipment you need, but not the food.

There are cherry blossoms all over the park and they typically bloom the last week in March and first week of April. This year, they were later than the annual average and didn’t start blooming until around April 1st. They’ve also a handful of ‘jyugatsu sakura’ that bloom in October too.

Hours: generally 9 am to 5 pm. From July 1st to August 31st closing time is 6 pm. And from November 1st until the end of February the park closes at 4 pm.

The nearest station is Takekawa Station on the Chichibu Main Line. However, it is a good 40 to 45 minute walk.

Parking: There is a small parking area on the west side of the park. You can also use the parking area in Saitama Norin (Agriculture) Park.