No spider lilies in Kinchakuda in 2021 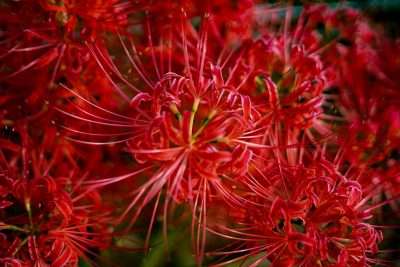 Kinchakuda Red Spider Lily Festival 2021, Hidaka, Saitama Japan, last updated August 27th 2021. The 2020 festival was cancelled on account of the Coronavirus outbreak. Moreover, on the 17th of September 2020 the city cut the spider lilies that had grown to prevent more people coming. On August 27th 2021 they announced they will be cutting the spider lilies again in 2021.

Red spider lilies are called Higanbana or Manjushage in Japanese. In Kinchakuda they are most commonly called “manjushage”. The famous red spider lilies in Kinchakuda in Hidaka bloom from about mid September. They set the date for the corresponding festival close to the time they bloom. Usually, the best time to view the flowers is around a week after the flowers are officially declared open.

The spider lily festival generally starts on a Saturday in the middle of September and usually runs until the end of September. The festival attracts thousands of visitors. Approximately 200,000 of them (visitors)! In a normal year, there are food stalls throughout the festival period. In addition, they have various stage performances. You can see the schedule on the official site linked in the grey details box below.

On August 27th 2021 Kinchakuda posted on their official website to say that this year, just like last year they will be cutting down the spider lilies.

In 2020 they cut them down on the 17th of September. For the second year in a row: there is nothing to see here this year folks! In 2020 they also cancelled the festival well in advance, but despite that people were still going to the site. So the city made the decision to mow the lawns and in effect cut the flowers when people kept turning up. So this year, they have announced early on that they will cut the flowers to deter people visiting.

Information for a non pandemic year

Image from the official site

The best time of day to get a good picture is around 10 am in the morning. The star in the picture below is one of the prime viewing spots.

Viewing costs 300 yen for adults and is free for children under 16.

On the edge of the park is an ORGANIC CAFE AND SHOP Alishan Organic Center to grab a bite or pick up some foreign healthy produce. Also nearby is Japanese Food Asahi with a twist of Korean food and ingredients. It is very popular for lunch: https://www.hidaka-asahi.jp/index.php

The popular MOOK Aki Pia recommend combining a trip to see the Spider Lilies with the Hidaka Kuri (Chestnut) Festival. Unfortunately, the date for the 2021 chestnut festival has not yet been decided. But it is usually decided in early September. However, it will be held between the hours of 9 am to 4.30 pm.

Where can I see red spider lilies, Higanbana, near Tokyo?

Kinchakuda (Hidaka) and Gongendo park (Satte) are the two most famous places you can see red spider lilies near Tokyo and in the Kanto region. Both are in Saitama prefecture, just north of Tokyo. However, there is a third at the Terasaka Terraced Rice Fields, also in Saitama (Yokoze in Chichibu), which is a little more remote and off the tourist trail. It has 2 million red spider lily.  Moreover, another location relatively close to Tokyo, but with less visitors: spider lilies in Yoshimi.