In: Autumn in Saitama, Festival, Life in Saitama, Seasonal, Things to do in Saitama
Tagged: Festivals and fireworks, Ikoka, something different
With: 4 Comments 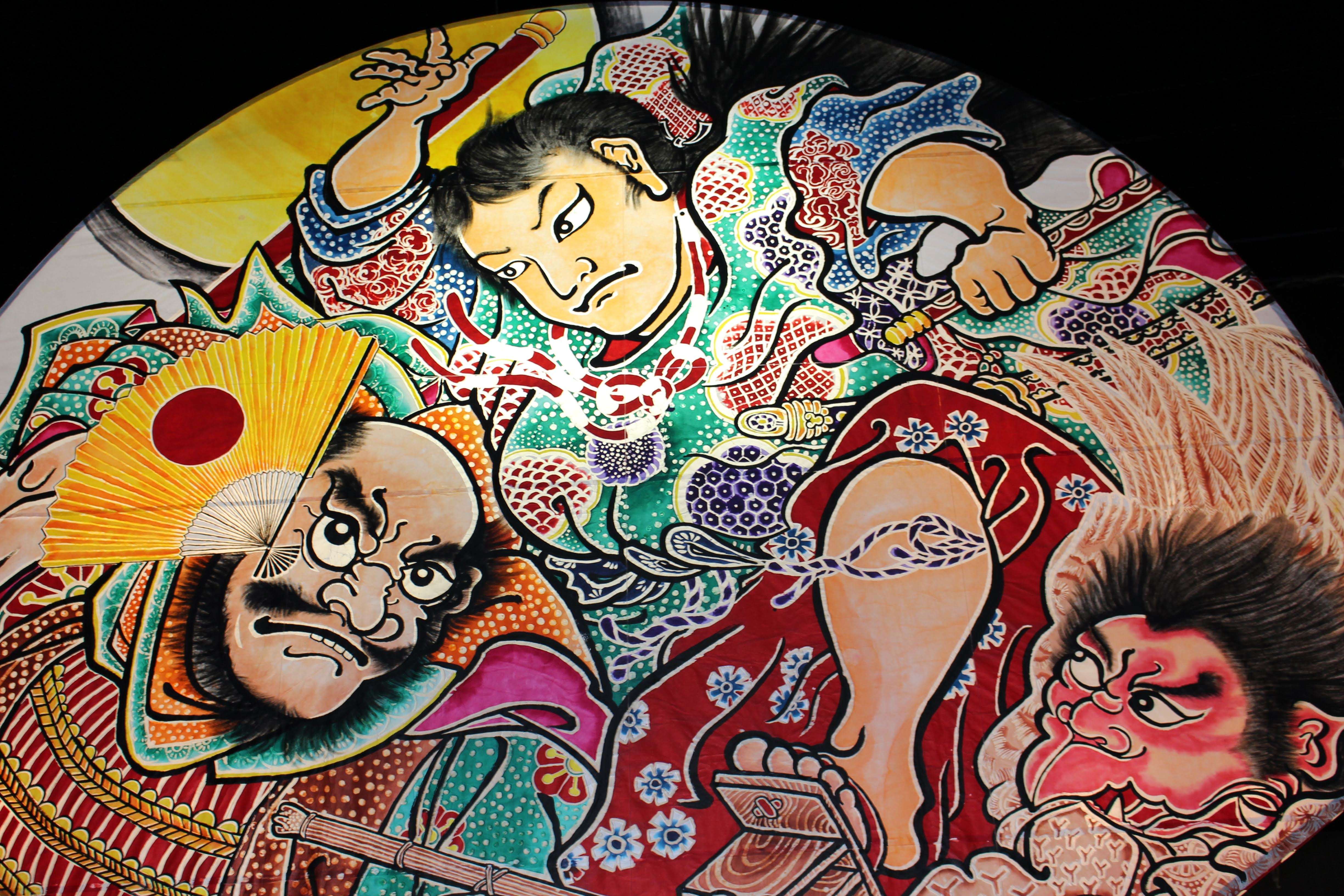 A neputa is a type of lantern festival float with dramatic images painted on a fan shaped canvas. Traditionally the images were of warriors. 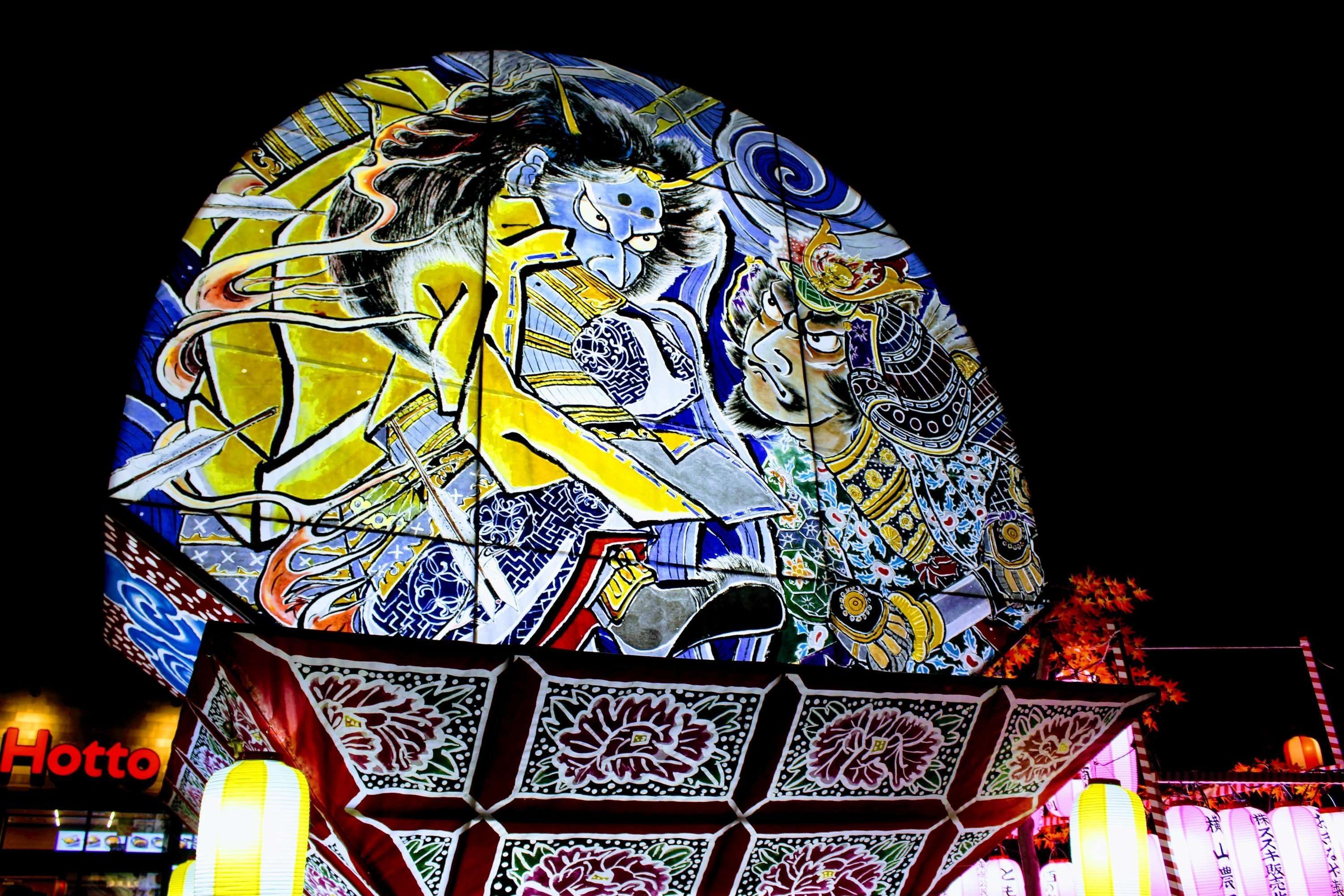 What is the Neputa Festival?

The Neputa Festival is a type of lantern festival that originated in Hirosaki City in Aomori. It is often confused with the Nebuta festival which is also a lantern festival from Aomori. The main difference is that the Neputa festival lanterns are smaller than those of Nebuta and shaped in a fan.
A key feature of the lanterns is the difference in the front and back images of the lantern. The floats are accompanied by traditional music played on the taiko drums and Japanese flute. It is said that the lights and music were used to scare off a sleep demon that was believed to be responsible for making people sleepy during the height of summer.

In 1991 a team of Kitamoto city officials visited Hirosaki in Aomori, the home of Neputa, to learn how to make the festival floats used in the parades. And to study the techniques used in painting the distinctive and captivating images.

They brought their knowledge back to Kitamoto to create a Neputa Festival in the city with an aim to get young people involved. The festival in Kitamoto is also a competition and to this day even a local school participates by entering a neputa made by the students.

Traditionally the Neputa of Hirosaki are fan shaped with a fierce image on one side and a softer image on the other. The Neputa of Kitamoto – about 20 in total – are more varied. A lot of them are the typical traditional variety, but you can also see original neputa.

My personal favourite this year was in the shape of a cherry blossom. It is in recognition and celebration of Saitama’s most famous sakura: the Kabazakura of Kitamoto, the only one of its kind in the world.

You could also see a lantern float in the shape of a globe. And there were smaller square floats too.

The Kitamoto festival is family friendly and involves a lot of the youth of the city. You can see even preschoolers participating in the parade and even playing the taiko drums. The drums and flutes really accentuate the festival atmosphere and invigorate the audience.

They also involve the local foreign community with one of the Neputa created by a local international club. The lantern float in the design of a globe is pulled by foreigners and teachers of the international club. And if you express interest you can also apply to participate.

There is a very amiable ambiance at the festival. It is easy to get chatting to the locals before the procession. Tonight, even though I hadn’t preregistered in advance, I was invited to don a happi coat and pull a lantern float. I was even given free beer and onigiri from different lantern float teams!

The festival starts from around 2 pm. During daylight there are different music and dance performances. Festival and food stalls line the road from the Kitamoto station. After dark the lantern floats are on display for about 40 minutes before the procession starts.

The procession starts around 6 pm. The lantern floats are pulled up and down a one kilometer stretch from the west exit of Kitamoto station to near the Hotto Motto on Nishi Chuo Road. All the while festival music accompanies each float as it parades. The festival finishes at 8 pm.

The festival is held close to Kitamoto Station on the Takasaki Line. You can also come by car as they have several car parks set up for the festival and each of them are within walking distance of the festival area. I used the Ishido Daishi shinpuku temple, marked in pink in the map below, and there were only about 12 cars there.