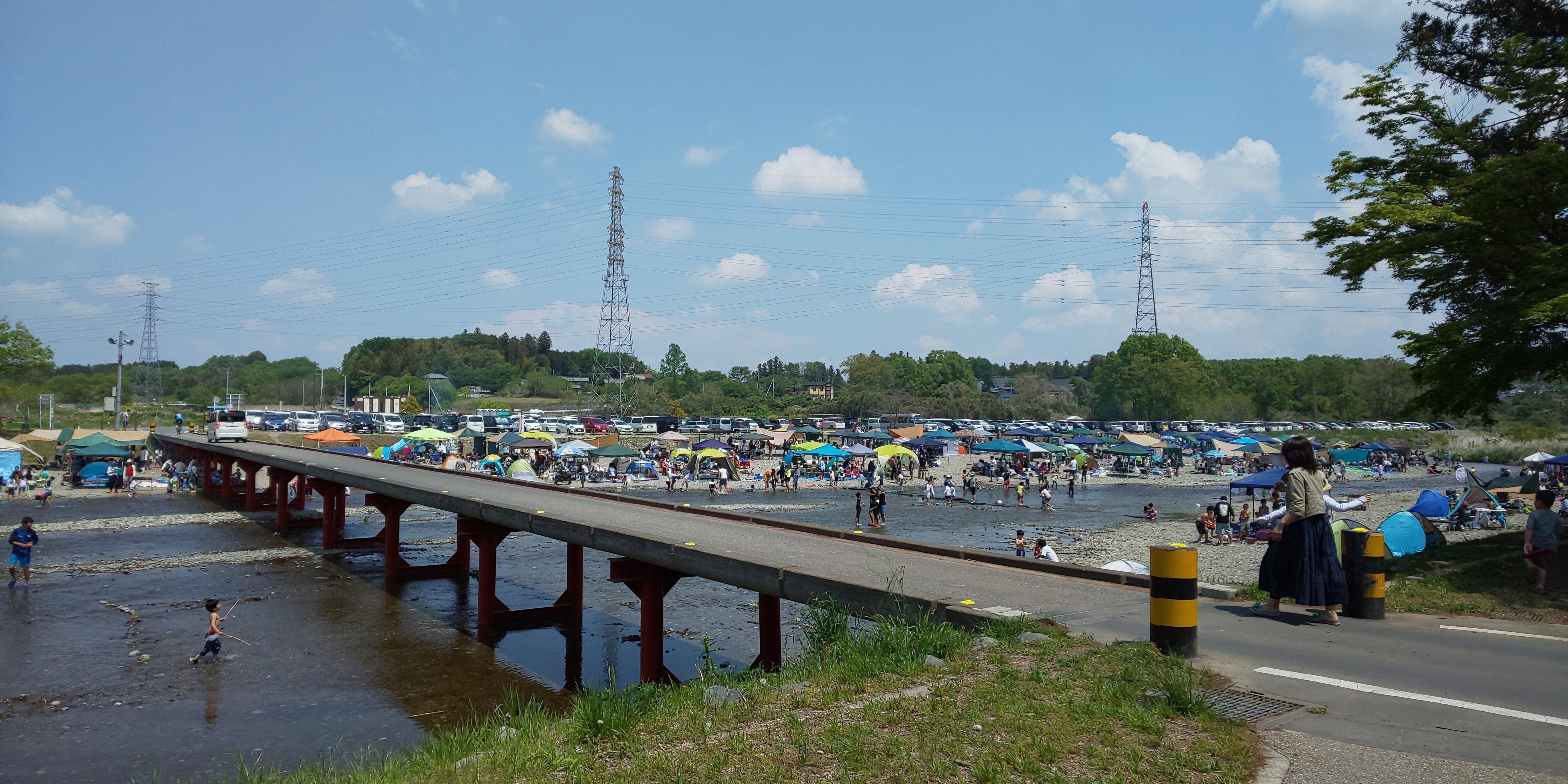 Kurakake Clear Stream Village: River BBQ and water play at Kurakake barbecue site in Higashimatsuyama, commutable from Tokyo on a day trip. Booking for the 2021 barbecue season at Kurakake is now open temporarily closed. They opened the booking on March 1st and then closed it due to prefectural directives. Any bookings made, during the period they were “open” for booking, were completely cancelled. The barbecue areas will remain closed until at least August 22nd 31st. The date was extended due to the State of Emergency.

However, although the facilities are currently closed, Saitama residents can actually still visit for a splash, fishing or a walk in the area. But they request you maintain social distancing and only stay for one hour. One of the car parks (with a toilet) is open for this purpose. However, they have waived the 500 yen parking fee for this period. The car park is manned and they record your car license plate and what time you entered the car park. In addition, during the period of the State of Emergency you can not use any type of barbecue equipment even tables and chairs. Pop up tents and any type of tarp or sun brolley is also forbidden. Also, please note, throughout the pandemic they request you use a mask. Moreover, and it should go without saying, you can’t visit with a fever (body temperature higher than 37.5 degrees).

When the facilities do open back up again this year they are not restricting access to just Higashimatsuyama residents as was the situation for much of last year. But you need to book in advance by email for a coveted spot at Kurakake BBQ spot once they open registration again. Scroll down to information for more detail.

Kurakake barbecue site, also known as Kurakake Clear Stream Village or Kurakake Seiryu no Sato in Japanese, is a riverside barbecue spot in Higashimatsuyama. The area has been used for barbecues for decades, but the riverbed area was cleaned up with new facilities added in 2017.

The site is on the Toki river. The river is definitely clean enough for children to play in and there is no rubbish in it. But the water is not drinkable and it wouldn’t win a prize for the cleanest river in Saitama!

What is great for families with young children is that the river is not particularly deep. And asides from a handful of locations further downstream, there aren’t really any currents in the river. There are stepping stones, which the kids love, near the bridge beside the car park.

Like with any river, sometimes there are some slippy spots, but by and large as there is no moss on the stones it is a relatively safe river to walk in. I would advise some sort of water shoe. If you forgot to bring some, you can buy them at a reasonable price (supply permitting) in the small shop on the south side of the river.

There are no strict rules enforced at this site. And they allow all manner of water toys in the river. And similarly no restrictions on camping / barbecue goods on the riverbed. Occasionally we have been to sites that won’t allow you pitch a tent, but this site has no such restriction. Anything goes.

There are some fish in the river. Actually there is no official rule that you can’t bring home what you catch, but by and large children catch and release these days. They are just small fish and occasionally some crabs too. You can buy fishing nets in the small shop or bring your own.

The area is quite picturesque with lush green and / or countryside views. There aren’t any large buildings in sight and they have maintained the natural appearance of this country riverside spot. The bridge, which is as functional as it is quaint, is a narrow one car width old fashioned bridge without any sides. The handful of small buildings in the area, such as the toilets and shops, are hidden in the wooded area.

In April wisteria grows on the south side. Currently (May 2019) there are Japanese primrose in bloom also on the south side. In September there are some red spider lilies. And in Autumn you can see foliage change colours on the West side. Most of the trees are evergreens though, so during the season that the BBQ area is open you can enjoy fresh lush green scenery.

Along the riverbed is *normally* a free for all, first come first served. (In 2020, for a period of time they only allowed people living in Higashimatsuyama to use the “free” site). But if you prefer to book an area in advance, you can reserve a barbecue area in the woods. The woods are on the embankment above the river on the south side. If you book this area, you also get priority parking in either one of the car parks.

Booking a table in the reserved area costs 2000 yen. If you want a full barbecue set it costs 3,500 yen. You bring your own food, but they provide all the necessary equipment to barbecue it.

Other River BBQ areas in Saitama

Season: April 1st to November 30th 2021. However, they subsequently closed due to directives from the prefecture. They will be closed until at least August 22nd. Booking opened on March 1st 2021, but closed later in the year. When they open booking again, you need to email to the address at the bottom of this page. I can’t share it here for legal reasons. You can ring 0493-81-6868 between 9:00 and 5:00 pm with queries. **The system and conditions changed frequently last year due to the Coronavirus, please do check the official website for any further changes**

Hours: 9 am to 5 pm for the car park, toilets and bins, seven days a week. You can’t pitch a tent or tarp out of the hours either, but the river itself is not private and thus is open 24 hours. Also, although the car park’s official hours are from 9 am, in my experience it is always open at least ten minutes before that.

Cost: if you are just using the riverside it is only 500 yen per car. (See above about the priority / reservation area). They give you plastics bag when you pay on the way in and you can leave your rubbish in a designated area in the car park.

The Kurakake Barbecue site is just 40 minutes from Tokyo on the Kanetsu Expressway. You get off at the Higashimatsuyama Interchange and drive 4 kilometres (about 8 minutes) west on country roads.

By public transport although the nearest station as the crow flies is Tsukinowa, there is no bus from that station to the barbecue site. It is about a 40 minute walk. But if you get off at Takasaka station you can get a bus to Kobe Shrine it is only a 15 minute walk from the shrine.