Nemophila in Saitama and Kanto, includes free virtual tours and a new spot 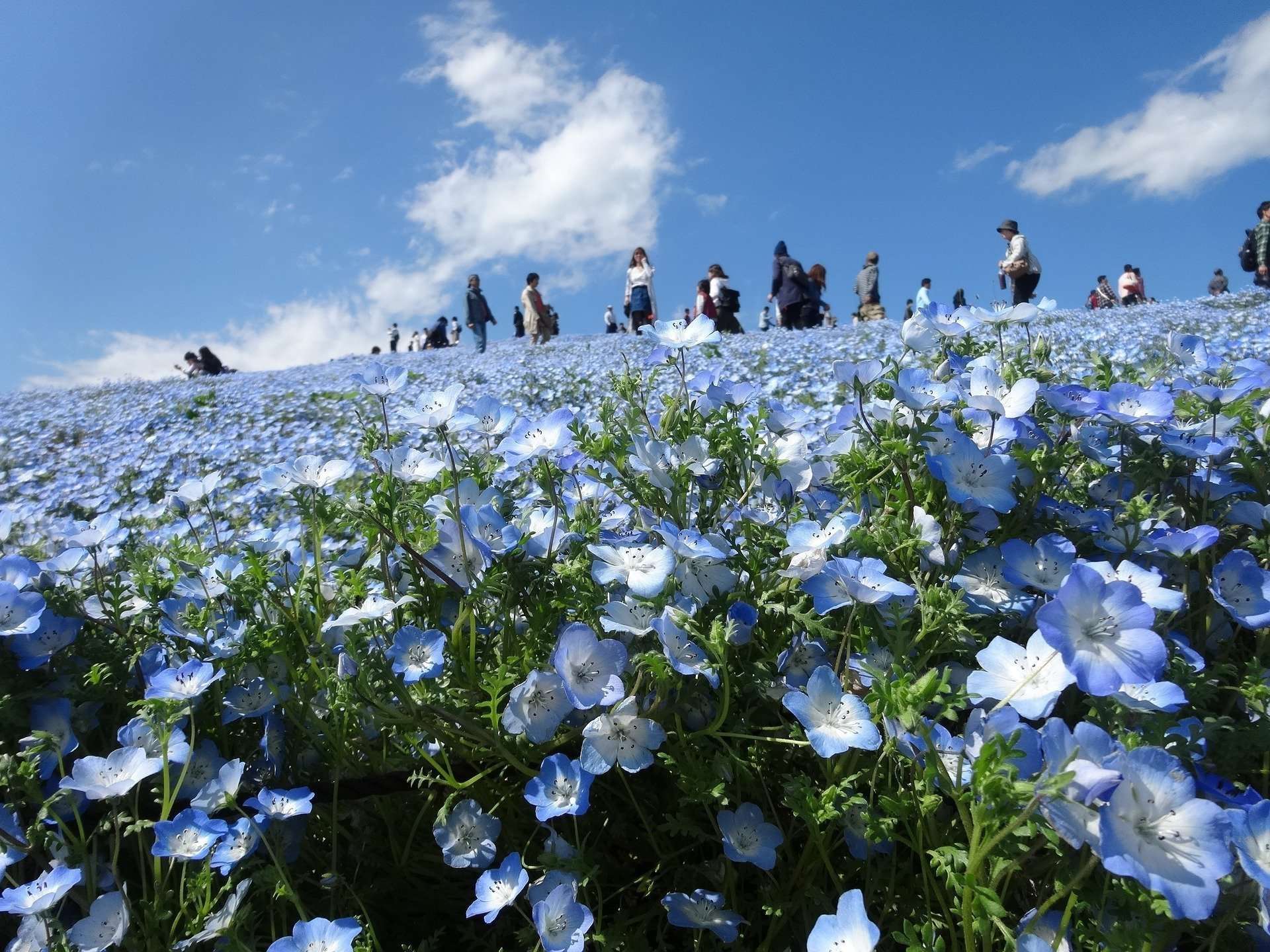 This year, 2021, the famous nemophila flower fields in Hitachi Seaside Park are open to the public again. They were closed in 2020, on account of the Coronavirus, right when the nemophila were in full bloom. Likewise, the lesser known Nemophila fields in the other prefectures of Kanto were also closed to the public due to the pandemic. Thankfully, the majority of nemophila spots are open to the public again this year. However, there are still a couple that are closed, including Tobu Treasure Garden which is featured in this post. This post includes a selection of five places to see nemophila in the Kanto Plain, four that are open this year and one with a virtual tour. There are also another two additional free virtual tours in this post, for those that can’t make it to see the Nemophila in person this year.

Nemophila are a flowering plant of the family Boraginaceae. The name Nemophila comes from the Greek ‘nemos’ meaning ‘small forest’ and ‘phileo’ meaning ‘to love’. They are also known as Baby Blue Eyes due to their striking pale blue color with a white center. However, not all nemophila are blue. There are also white nemophila which you can see in Saitama Omiya Hana no Oka. In Japanese they are called Rurikara Kusa. The “hanakotoba” flower meaning in Japan is actually taken from English. In English they supposedly represent success as well as forgiveness. They are annuals and typically bloom in spring. In Japan, they most commonly bloom for the month of April. This year, 2021, like many other seasonal flowers, they came into bloom a little earlier than normal. They are currently at prime viewing stage around the Kanto plain.

The Musashi Kyuryou National Government Park, most commonly called Shinrin Park, is one of Japan’s largest. It was the very first national government park in the whole of Japan. The park has stunning flowers all year round. In April 100,000 nemophila grow in the “Undo Hiroba” close to the West Gate of the vast park. Public buses go to the west gate from both Tobu Tojo line’s Shinrinkoen station and JR Kumagaya Station. In another part of the park, a good 20 minute walk, there is a vibrant display of 700,000 Icelandic Poppies. About a ten minute walk from the poppies you can also see Lupine starting to grow from around mid April. They come into their prime in Golden Week.

Update April 27th 2021: the nemophila in Shinrin Park are now past their prime.

For those that can’t make it to the park, here is a short virtual tour showcases both the nemophilia and the Icelandic poppies that are currently in bloom in the park.

A new nemophila spot in Saitama:

This year, 2021, the Konosu Poppy Field has three displays of Baby Blue Eyes. None are particularly big, in fact two are quite small, but the third is decent enough. Moreover, the contrast against the orange California Poppies is stunning. While Shinrin park and Omiya Hana no Oka’s Baby Blue Eyes are past their peak, as of the end of April 2021, Konosu’s are just starting. More information here.

Hitachi Seaside Park is the most famous nemophila spot in Japan. With good reason too. The display in Hitachi Seaside Park is out of this world. It looks like an endless sea of blue. The variety grown in Hitachi Seaside park is called “insignis blue”. On a clear day the baby blue flowers merge seamlessly into a blue sky. Moreover, there are approximately 5.3 million nemophila in the display. The park is large with many different sections. The nemophila are grown on the “Miharashi no Oka” hill. They typically bloom from mid April to early May. Millions of people come annually to witness the stunning sight. Do expect crowds, even in this period of Coronavirus. While there, check out their “Nemophila Latte” in the “Kinen no Mori” Rest House in the park!

A virtual tour of the park. Nemophilia from : 00.25 to 01:42. The tour also includes Kochia and other seasonal flowers in the park.

They also have a short virtual tour specifically of the nemophilia taken during this blooming period.

The tulip display of Showa Kinen Park is synonymous with the month of April. But Nemophila also grow in the park from around mid April. The baby blue eyes bloom on a small hill opposite the tulips. It is not as large a display as others, but it is very accessible. Moreover, you can enjoy other seasonal displays in the park at the same time.

The Tobu Treasure Garden is another flower park in the Kanto region that has seasonal nemophila. It is located in Tatebayashi City in the east of Gunma prefecture. In April one of their displays of 800,000 flowers includes a large section of nemophila. At anyone time they have about a million flowers in bloom in total. Unfortunately, they are still closed due to the Coronavirus and an opening date has not yet been set. This is a promotion video for the park. The nemophila are shown from 01:03 to 01:39. Details for the park for future reference is included under the video.

Kurihama Flower Park is free in and is open 24 hours. The display of baby blue eyes in Kuriyama Hana no Kuni is in the poppy fields. Baby blue contrasted against the red poppies and the surrounding green trees. They bloom with the poppies from the end of the first week of April until the end of May. There are one million poppies in the field, but the number of baby blue eyes is unknown. It is a large display though. Moreover, you can see the flowers with carp streamers.

Other Parks with Nemophilia in the Kanto Area

Below a list of a few other places with smaller displays of Nemophila in the Kanto plain. None of these sites currently have a virtual tour of their nemophilia.

Have you seen any nemophilia this year – either in real life or virtually? Have you been on any virtual tours during this lock down period? Any you would recommend?