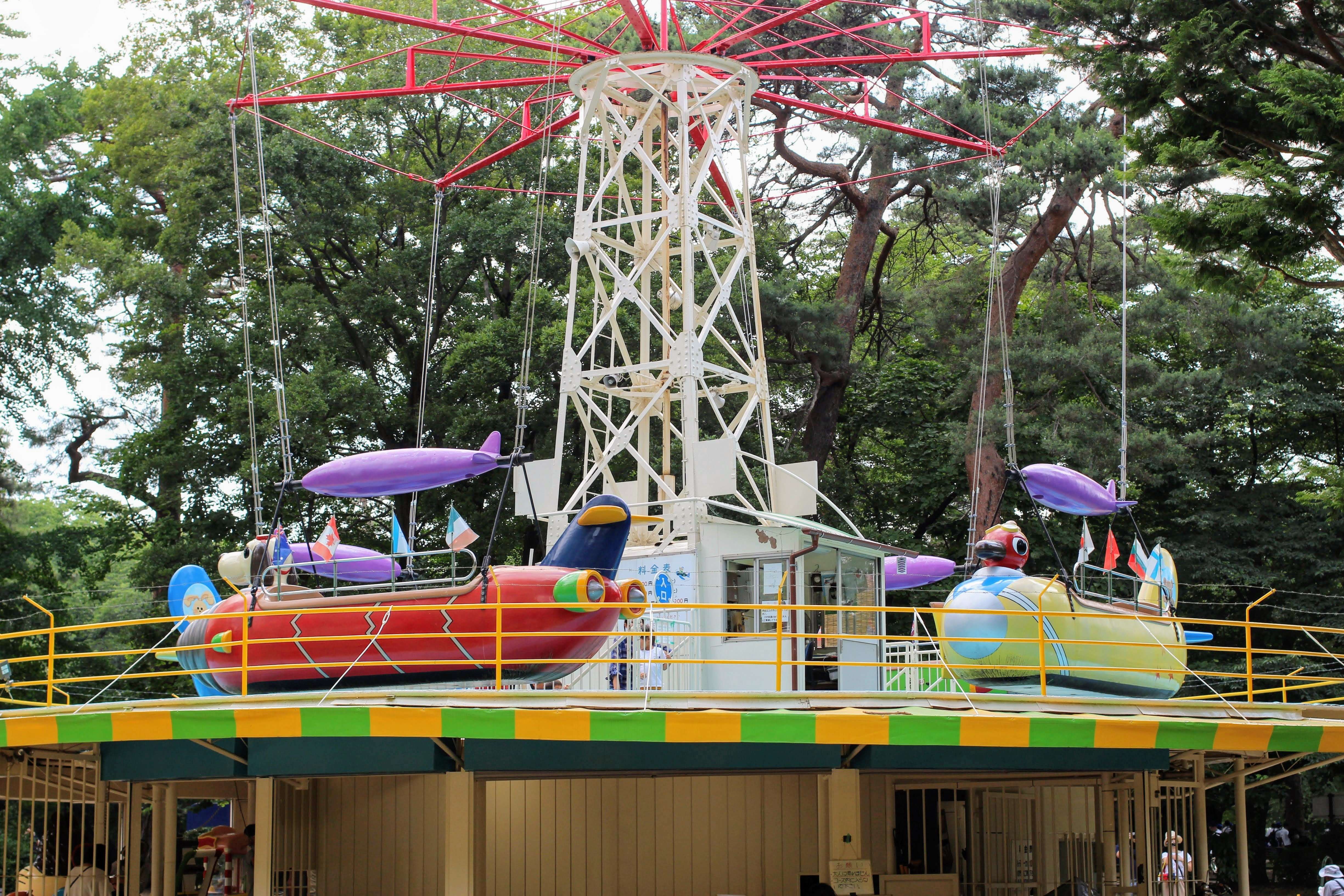 Omiya park has a lot to offer for a full family day of fun. There is a small free zoo where you can see the animals up close. Unfortunately, the playground in the park is a bit lacking, but you can pay money to use battery cars or ride one of three amusement rides. There are a number of sporting events held there at different times of the year in one of the many sporting facilities.

If it rains, you can escape to the small but engaging museum on the premises. In spring the Cherry Blossoms are stunning and listed in the top 100 places to see Cherry Blossoms in Japan. The red pine forest in the park is famed too. The park is also home to the 2400 year old Hikawa shrine (not to be confused with Kawagoe Hikawa Shrine). There is even a shop in the park and plenty of vending machines and essential facilities such as toilets and drinking fountains.

More details on all the park has to offer:

Omiya Park all combined spans 67 hectares. It is a popular place and a very well used park. When there is a sporting event on or during the cherry blossom season the park can get very crowded. But even during off season and with no particular event on you can see people enjoying the park.

The park has a lake and Japanese red pine forest. The trees in the forest are several hundreds years old. “Dai ni” (second) park is well known for its plum blossoms. There are other flora that bloom at different times of the year.

The park is also known for its stunning cherry blossoms. There are approximately 1200 cherry blossom trees. It is one of only three places in Saitama Prefecture that are listed on the official top 100 list of places with the most beautiful cherry blossom scenery. More information about the cherry blossoms on the In Saitama / Saitama with kids event pages:

Apart from being a recreational park, Omiya Park has a number of facilities and attractions within it.  The facilities include:

There is a small free zoo in Omiya Park. This is quite common in Saitama and there are a number of parks that have a small free zoo area in them such as Maruyama Park in Ageo or Kitamoto Children’s Park. The one in Omiya is the biggest free zoo in Saitama, but in saying that it is quite small. Particularly in comparison to the excellent and reasonably priced children’s zoo in Higashimatsuyama which is about 500 times its size!

The zoo in Omiya park though it is possible to get a good look at the animals, unfortunately it is because the enclosures are quite small. They have a petting corner time too, when you can hold small animals; usually guinea pigs. They give you a towel to put on your lap and the staff will carry the animal to small children if they aren’t able to pick them up themselves.

They have hyenas in the zoo and they come right up to the front of the enclosure: if there wasn’t glass there they’d be only a breathe away. There is a good selection of monkeys. They don’t often come near the glass, but my son has a little trick to get monkeys to pay attention. He discovered in Shizuoka’s Fuji Safari Park once that monkeys have an interest in beetles. So he brought a beetle that he had caught (and released) in the park along to the zoo and we were able to interact with the monkeys! (Zoo hours in the information section at the bottom of the post).

Beside the free zoo is a playground and amusement area. The playground is free, but the amusements cost money. One of the reasons I stopped frequented this zoo when my oldest two children were small was because of the amusements in the park. At that time, about 6 years ago, the playground was even more basic than it is now and they would bore of it soon and ask to ride on the battery cars, train ride or balloon ride in the amusements.

Since then the playground has been improved and there is more free equipment for kids to play with. Plus my kids are older anyway so they don’t look to ride on the amusements. But when they were toddlers a day at Omiya park became quite costly! It is really nice they have the rides and it is nice treat for an occasional visit to the park, but when you have small toddlers the rides can become a point of contention!

THe Japan National Tourism Organisation has English information on the shrine:

The Saitama Museum of History and Folklore is tucked away in one corner of the park. It has its own car park, for about 12 cars, that can only be used by those visiting the museum. The museum is separated into two parts: the free said and the charged side. The free side includes an outdoor play area with traditional toys such as kendama and koma. In addition, the charged part showcases historical artifacts from or found in Saitama prefecture as well as information for the region.

There is also an event and crafting space in the museum and you can pay a nominal fee to try making some traditional crafts such as tie dye handkerchiefs or prayer plaques. They have a great selection of Saitama stamps that kids can use freely. There is a restaurant, rest area and nursery in the facility. There is currently a smoking area outdoors beside the restaurant, but they will be removing it in the next year. Hours and cost in the Information section at the bottom of the post.

There are a number of sporting grounds and facilities in Omiya Park such as a soccer stadium and gymnasium. But two of the more unusual and really cool facilities there include the Archery range and the Velodrome. Also, the baseball stadium is noteworthy due to the plaque outside commemorating Babe Ruth’s visit to the park in 1934.

The park is a big hit with my four kids aged between 4 and 9 years old. As it is quite a distance for us, when we go, we go for the whole day. Thanks to the zoo, playground, museum and different points of interest in the park there is plenty to entertain them for a full day.

Years ago, when I only had two children we used to visit the park weekly for a play date. The kids were 1 and 2 years old at the time. They enjoyed the park then too, but the problem I had then is that they wanted to use the coin operated rides all the time. At the time I had an American car that was too big to park in the free car park and so I also had to pay for parking. So with parking charges of 1000 yen and paying 200 yen battery cars, train rides and twice that for the balloon ride, it ended up being a costly visit.

Now that the kids are older they have little interest in the amusements and will happily play in the free playground, run around in the open spaces, hold guinea pigs in the petting zoo, watch a sporting event if one is on and hunt for insects in the woods. They particularly enjoy the play area in the Saitama Prefecture History and Folklore museum where they can use hula hoops and play with kendama and koma. There is also an old water pump there they enjoy using.

I like that we don’t have to be in one area for the whole time. We can enjoy a scenic walk and take in many different views within the park. I particularly enjoy this park during cherry blossom season when there is a great atmosphere and of course stunning sakura. It is one of our favourite places for family hanami (picnic under cherry blossom trees).

The park is essentially open 24 hours, but there are parts of the park you can’t get into outside of the official hours which are between 9 am and 4.30 pm. The car parks generally open from 8.50 am to 5.30 pm. The park and the official car parks are free.

The zoo and amusements are open between 10 am and 4 pm. The zoo is closed most Mondays and on New Year’s day.

The museum is open from 9 am to 4.30 pm most of the year. However, during the months of July and August it opens until 5 pm. The museum is closed on Mondays and year end from December 29th to January 1st. The museum entry is 300 yen for adults into the permanent exhibition area.  There is a free section in the museum too.

The stadiums and sporting facilities also work to a separate schedule and often only open when there is a sporting event being held at the sports ground or facility.

By train the park’s closest train stations are “Omiya Kouen” or “Kita Omiya” stations on the Urban Park line. Both are an approximate 7 minute walk to the main park. Dai Ni and Dai san are a further 10 to 15 minutes away. JR Omiya station which is serviced by many train lines, is about a 20 minute walk (from the stations East exit).

Free parking for 314 cars and an additional 7 spaces for wheelchair users and / or drivers with lower mobility.