In: Play in Saitama, SPORTS, Things to do in Saitama
Tagged: Hanno | Hidaka | Iruma, something different
With: 0 Comments 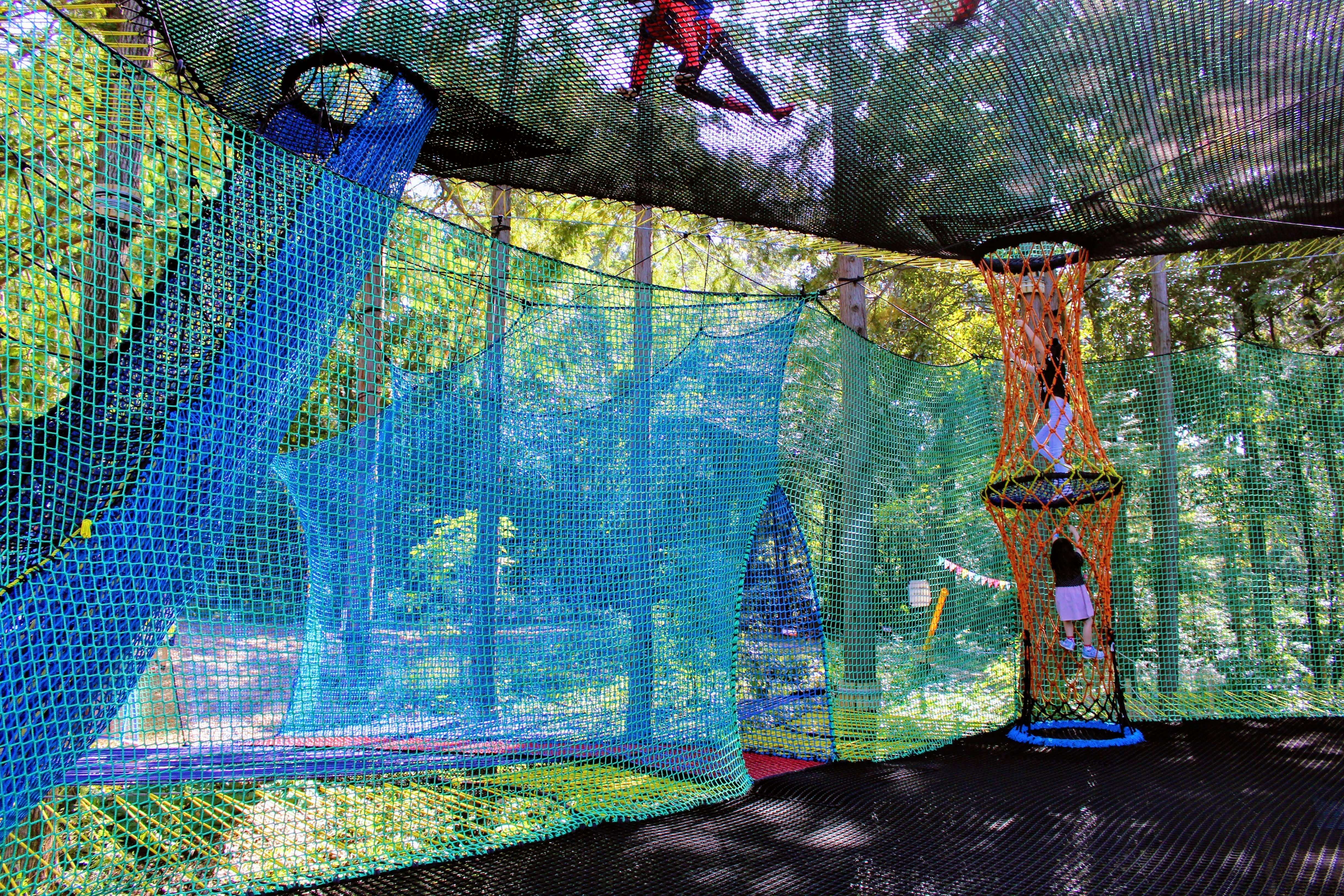 “Funmock; an athletic in the sky“

Before going to Funmock today, I was searching online for accounts of people’s personal experiences at Panza, but surprisingly couldn’t find even one article in the English language. I did however find a very interesting piece from 2003 about Toshio Hayashi and Project Adventure Japan. It explains the concepts and policies behind the incentive. Click here for the full article on Tokyo Weekender.

There are a few Panza dotted around the country. The branch in Hanno is called Panza Miyazawako. It is a relatively new addition to the Project Adventure family of outdoor nature based learning through play and sports in Japan.

Panza Miyazawako is based at the Metsa Village, the Finnish theme park and home to Moomin Valley, in a rural area of Hanno City. The play area that this branch of Panza offers is called FUNMOCK, a contraction of fun and hammock. It opened on April 18th this year, 2019.

The entrance to Funmock is located within Metsa Village on the way to Moominvalley, opposite Lake Miyazawa and in the forest on the hills. It is after the blue Nordics building and before the Starbucks just at the Metsa Hall, where there is currently a Christmas market.

Funmock is an adventure playground for both adults and children. It is made entirely of rope and suspended from trees. There are ten chambers within the play area, including a lower floor chamber, which is reserved for children under two. And there is a space on the ground too under the netted play land, with hammocks for chilling out in and great views of Lake Miyazawa.

One of the chambers has large balancing balls to play with, another chamber has balls tied up high for kids to jump up and touch. Two of the chambers have upper chambers which you can climb up to and use the slides that go back down to the lower chamber.

Its like a humongous trampoline in the air, with two floors and slides also made of rope. It does feel a bit weird when you enter the play area. I felt for a few minutes like the netted rope below might give way or that the pressure would create a large hole. It didn’t and after a few minutes the feeling went away.

There is a small reception area beside the Metsa Hall right after the Nordics distinctive blue building. Here you fill out a disclaimer form with your name, address and an emergency contact number. After filling out the form you walk up the hill to the reception building, where you pay for your desired play period.

You can play for half an hour, an hour or 90 minutes. For children under 12 parents must also pay to enter and accompany a child/ren. There is no charge for children under two years old. The sessions are started on the hour or half hour from 10 am, but reception starts from 9.30 am. On a weekday you don’t need to have a reservation, but on weekends, public and school holidays it is recommend you book in advance (click for the booking form).

Its advised to arrive about ten minutes before a session starts as there is a short explanation of the rules before you start to play and after you pay. The waiting area where they explain the play area is up another hill from the reception building.

There is a large tent with chairs and hammocks you can use while waiting or as a rest area. You can bring water and a towel to this area, but it is advised to leave hand bags and larger items in the lockers at the reception building. The lockers are free to use.

They are not particularly strict from what I can tell, but they do give you a run down of how to play safely. They don’t forbid you from wearing heels into the play area, but there are flat shoes you can borrow in the reception building so you can play easier.

The main rule that the enforce is that there is no jumping in the corridors of red net nor on the upper floors. They also ask parents and adults to be careful of children when jumping as the bounce we create can send children flying!

We enjoyed Funmock more than we expected. It was a really good work out too. I hadn’t expected to exert myself so much, next time I will bring a change of T-shirt! The kids loved the novelty of it. They have played in tree top adventure playgrounds before, but this is quite different with you being suspended.

If you are not in the mood for a work out, there are places you can chill out. There is a chamber within the netted sports adventure playground where you can just sit or lie down or you can use the hammocks on the ground and there is also the tent area just beside the entrance to the play area.

The kids really loved the netted slides. You climb up to them from nets too. There is one that is really steep. I had to pluck up the courage to go down it, but I am so glad I did. The kids were sweating after their session as was the staff member who spent the whole time playing with kids, which I thought was really commendable and sweet.

To be honest about 40 minutes was enough for me and my five year old. If I hadn’t jumped and climbed so much I probably would have been able for longer. Older kids would probably enjoy an hour or the longest session of 90 minutes, especially if you are taking breaks and using the hammocks and / or rest areas.

The nearest expressway is the Ken-o expressway. Both the Sayama Hidaka interchange is closest to Metsa. It is about a ten minute drive. From today, November 1st 2019, the car park is free on weekdays – until March 2020. The car park normally costs 100 yen for 10 minutes on a weekday and 500 yen for 30 minutes on weekends. There is an upper cap of 1,800 yen per day on weekdays and up to 3,000 yen on weekends. However, with the current campaign the weekend cap has been reduced to 1,500 yen until March.

By public transport you can get a bus to Metsa from Seibu Railway Hanno station. It takes about 13 minutes. You can walk from the station too, but it takes upwards of 30 minutes. There is also a bus from Higashi Hanno station which is on the JR Hachiko line. From that station it is a little shorter on foot as it is only about 2.6 kilometres. Buses from both stations costs 200 yen.