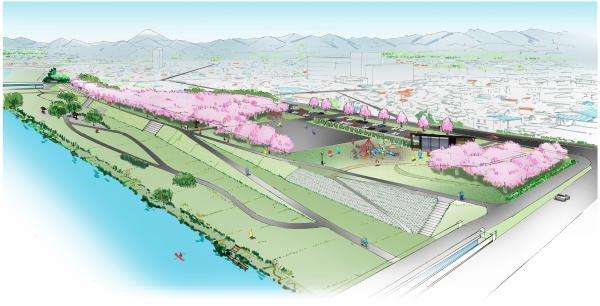 And the opening date has been set…. Friday March 5th.

A year ago, at the end of 2019, Sayama City signed a basic agreement with Starbucks Coffee Japan to open a branch in the city. On the 25th of this moment, December 25th 2020, they signed a binding contract. Kasenjiki Central Park was chosen to be the location for the first ever Starbucks in Sayama City, as part of the Irumagawa Utilization Project.

The park is locally famous for its cherry blossoms. The branch in the park is set to open in early March, just before the cherry blossoms come into bloom. No doubt, Kasenjiki Central Park will be a popular place to enjoy hanami – cherry blossom viewing – in 2021 with the opening of the new coffee shop.

Starbucks with a terrace

The Sayama Irumagawa branch of Starbucks has a terrace. However, the terrace is smaller than expected. There are 3 larger tables on the south end of the table which seat three people comfortably. On the east of the shop there are 4 two seater tables. There is a grass area around the terrace. It is currently off limits as the grass is freshly planted.

Starbucks with a playground

Moreover, as part of the project, the city installed a large piece of playground right at the Starbucks. (There is already some playground equipment in the park, but on the eastern side of Shodai Bridge on the North banks). However, as of March 11th 2021 the play equipment is still under wraps. This is the first Starbucks in Saitama prefecture with an outdoor playground. In fact, it will be one of only handful of Starbucks throughout Japan with an outdoor playground. As part of the partnership between Sayama City and Starbucks, the playground and the car park will be maintained by the city.

Starbucks with a drive through

The Sayama Branch of Starbucks has a drive through too. Unfortunately, traffic in the area is very bad, even before they opened this Starbucks. So if you don’t have to queue at the Starbucks drive through, chances are you will have to wait in traffic to turn into the branch and again to get back out.

This park is also a renowned viewing spot for the Iruma Air Show, which is held annually on November 3rd. However, in 2020 the air show was cancelled on account of the Coronavirus. Whether it can go ahead in 2021 or not remains to be seen. The park is close to Aeon Sayama, which has a small indoor play area for children. It is also located relatively close to the Kasumigaseki Country Club which is hosting the 2021 Golf tournament of the Olympics. Chikozan Park and the Chikozan Children’s Zoo as well as the Saiboku headquarters with playground, hot spring and eateries are a short drive away.

Moreover, an 11 minute train ride from the nearest station (see below) brings you to Sakura Town. Which itself is relatively new. It opened in 2020. Sakura Town has dozens of things to do including an outdoor Teamlab. In addition it has the Kadokawa Culture Museum which houses, among others, an anime museum.

About a 20 minute walk from Sayamashi station (west exit best) on the Seibu Shinjuku line.

Other notable Starbucks in Saitama: