In: Local Kawagoe, Seasonal, Spring, Things to do in Saitama
Tagged: Event, February in Japan, Festivals and fireworks, Hands on experience, Kawagoe
With: 0 Comments 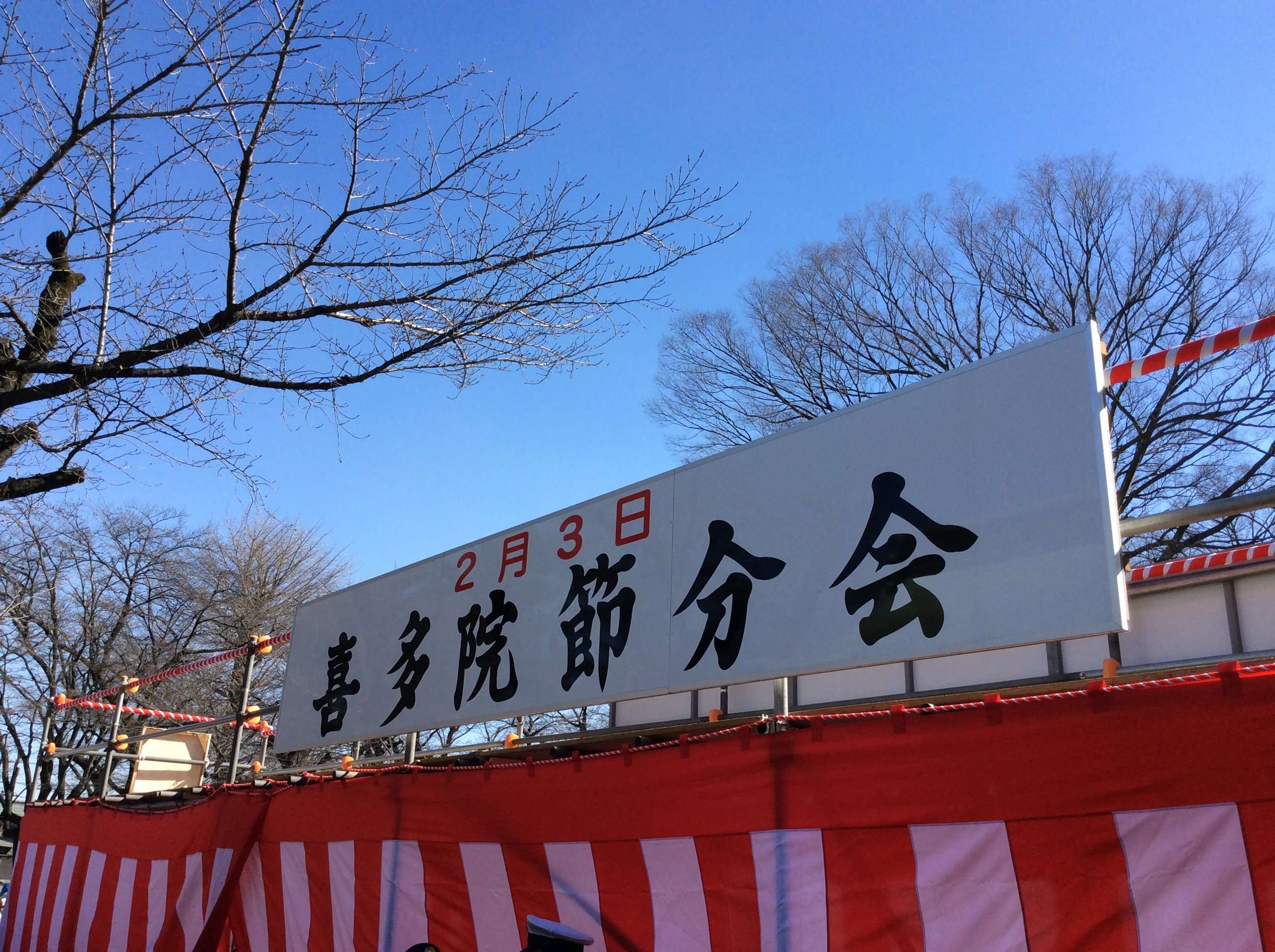 February 3rd is Setsubun in Japan, which marks the end of winter. People celebrate annually with traditional ceremonies in both homes and temples. A common tradition associated with this ancient festival is mamemaki or bean throwing. A lot of families carry out this fun tradition at home, but you can also visit a temple to do it with a crowd. Today, we did both.

When you carry out setsubun at home, the aim is to chase the ONI (ogres) away. It sounds like a metaphor for exorcism, but it is just a ritual to rid the house of evil and allow luck in for the coming year.  The oni represent evil and bad luck. We shout “Demons out, luck in” as we throw beans at an ogre, which is often the head of the household dressed up in traditional garb!  Most preschools and children community centers also mark the day with some fun crafts and activities.

Setsubun at a temple

When celebrated at a temple,  temple staff and honoured guests throw beans into the crowds from a dais.  It is not unusual for the temples to also throw things other than beans. In some places they throw fortunes or amulets or money or a combination of these. Tokyo has some temples that are famous for sumo wrestlers and / or celebrities throwing money to the excited crowds. Most temples conduct rituals before the bean throwing ceremony.  Some temples also have a performance by Oni, Japanese ogres or demons.

The oni in Japan usually have one or two horns and wear animal print shorts. They are most often depicted as being red, but the most famous setsubun festival in Kazo, Saitama has 3 oni; one red, one blue and one black. There are many temples that conduct setsubun and mamemaki ceremonies throughout Saitama. We went to one of the biggest; Kitain Temple in Kawagoe. This year was the kids first to participate in a ceremony of this type. They were dubious at first, but they quickly joined in on the commotion and were thrilled with their haul. They recounted the affair to their grandparents with great animation and excitement.

The video shows the dais. You can hear the emcee chanting. The last thing he says is “Fuku ha uchi” which invites luck and signifies the start of the bean throwing. I turned off the camera so I would have a chance to catch some of the goodies. 🙂

One of the reasons I didn’t bring them to such a ceremony up until now was because I was worried that the crowds would be intimidating, even dangerous. However, I found today that people were quite careful of children for the most part, plus they made periodical announcements to watch out for small children.  We were able to secure a nice little spot right by the dais with a responsible crowd around us, during the bean throwing.

However, just before the ceremony ended the throwers accumulated on our end of the dais with huge boxes of goods (not beans) to throw, so there was a sudden surge in the crowd. That was a little frightening for my 2 year old, but she was okay in my arms. It was actually a wonderful feeling when there were dozens of little packets falling from the sky and enveloping us in a feeling of richness!

However, the scramble to pick up the fallen packets was both surprising and amusing. The kind Ojiichan (older man) beside us suddenly became an oni himself as he whipped a packet from under my hand. Another stood on a packet so that my six year old couldn’t pick it up! The generous Obaachan (older woman) beside us who had passed us packets of beans was slipping unseen numbers of packets into her pockets and handbag. Despite those incidents we got a good hoard and the kindness of the Ojiichan and Obaachan returned as they complimented my kids on their stash and their devout participation. Much to my surprise I felt totally exhilarated after the whole experience.

Apart from the various ceremonies that were conducted there were other festivities to be enjoyed at Kitain today. They had some festival food stalls as well as some stalls selling flowers and plants, but what interested me most were the various stalls selling good luck charms, mainly Daruma and Manekineko. As we entered Kitain from the car park we stopped to look at the Daruma at the first stall. The very friendly, personable and informative owner told us many things about the goods he was selling.

While we were there a man bought one of the giant daruma which would cost around 20,000 yen (approximately 200 Eur0). We were invited to join in the Sanbonjime to mark the occasion.  Sanbonjime is the custom of clapping your hands rhythmically 3 times for 3 claps and one final clap to signify fulfillment. They only do this type of Tejime (ceremonial rhythmic clapping) when they sell their biggest sized Daruma. Passersby stopped to observe and exclaim enthusiastically. It was a lovely thing to be invited to enjoy and I think we may have received some good karma from it!

I have always enjoyed Setsubun as much for what it represents as the fun and vivaciousness of the celebration.  Now that the kids are old enough to enjoy the bean throwing ceremonies at temples, it just adds to the whole experience.  It completes the day for them too, as the celebration in the house is over quite quickly. The preparation of the masks and the aftermath of thrown beans take exponentially longer than the bean throwing ceremony itself! The kids love making the masks, feasting on the ehomaki, the traditional sushi rolls or makizushi and throwing the beans and eating them. (They say that if you eat the same number of beans as your age you will have good health for the year. ) However, I think after today’s experience,  what they are most anticipating now is the bean throwing ceremony at Kitain Temple Kawagoe. 🙂

For more details on Kitain Temple including maps, access details;

A fantastic detailed and informative video about Setsubun in CHICHIBU SHRINE:
https://youtu.be/P36zBCA_no0