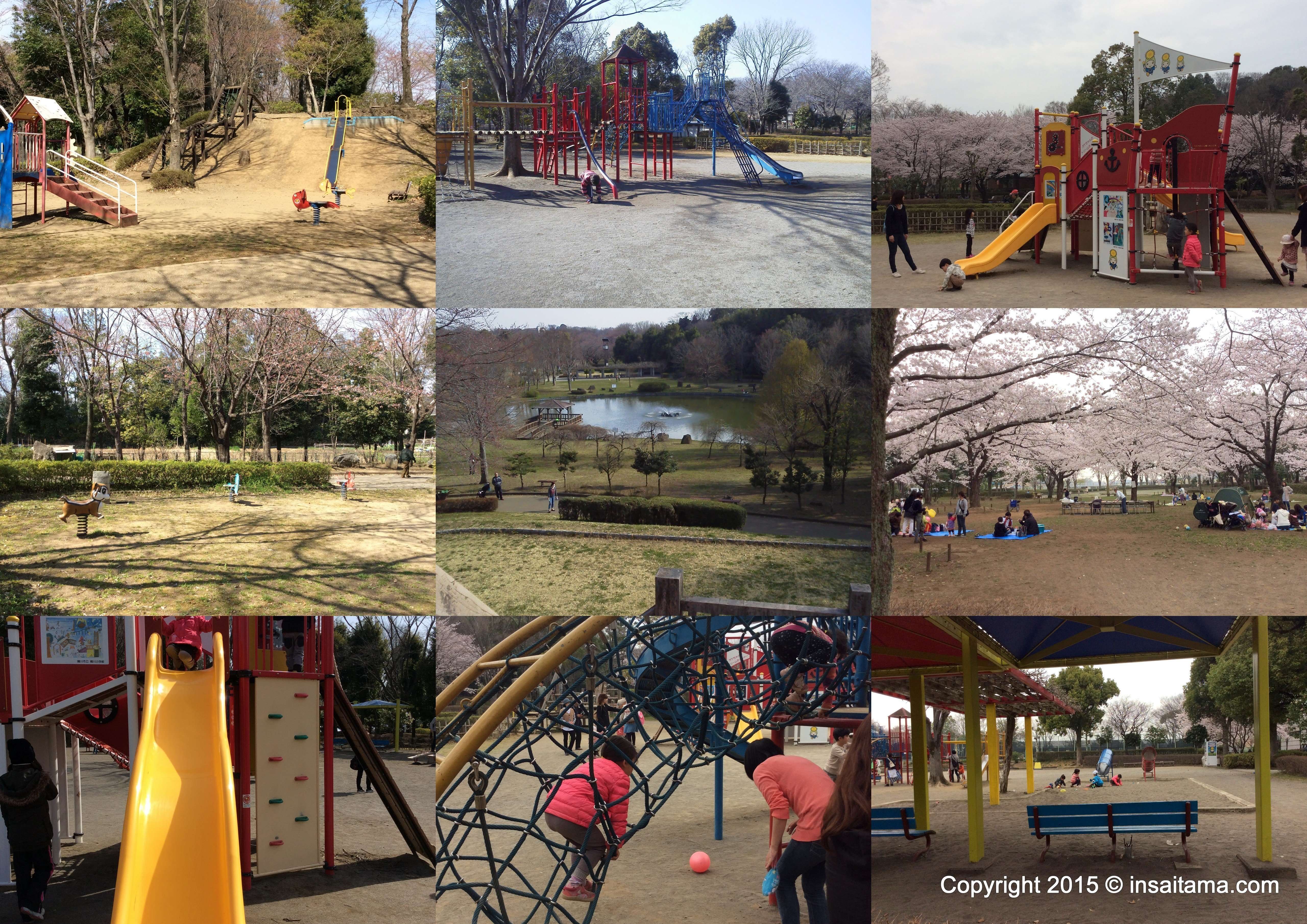 We’ve been hanging out in Shiroyama park quite a lot recently. Thanks to the Family Walker magazine featuring the new piece of playground equipment (the red and white pirate ship pictured below) and suggesting it as a hanami location. We had visited a few times in the past, but it didn’t make that much of an impression. It does now in 2015. Update 2020: And five years later in 2020 it is even more impressive as they put in a brand new barbecue area and new car park right beside the BBQ sites.

The rest of this article is not the 2015 original, but a brand new revamped version for 2020:

Shiroyama park is not a particularly large park. But the space is used very well. There are two playgrounds, a wading stream, the large new BBQ area, a separate picnic area, a lake with fountains, a lookout at the point of the old castle, two separate flower gardens, cherry blossom trees, tennis courts, a large multi purpose pitch and several open spaces. The park isn’t that far from us so we have visited dozens of times over the years and one thing that strikes me about this park is that it is well used. There are always people using the tennis courts or grounds and the playground is rarely empty.

The barbecue area used to be under the cherry blossom trees on the east side of the park. However, the new barbecue area is on the far end of the park to the old barbecue. On that end there used to be just a very small car park. They have completely changed it and it is now a large car park with a ramp and stairs going straight down to the trendy BBQ area. There are two sections to the barbecue: an undivided area that is free to use and an area with lots that costs 300 yen per site.

The Barbecue area holds up to 200 people. It is on grass. There are several sinks for washing up, a food prep area, an outdoor furnace / fire grate and somewhere to extinguish and leave your charcoal and ash. They have a wheelbarrow type vehicle for carrying luggage to and from your car. They put in new toilets too. And the area has its own management facility which doubles as a shop. They sell such things as charcoal, grill grid, tongs, even drinks and ice cream. There is also a nursing room in the facility with a diaper changing area. You can also rent out BBQ equipment.

You used to have to book the barbecue in person. Thankfully with the new area you can now book it online. The official web page with link to the booking page is here🔗. The barbecue area is conveniently located next to both the small playground and the water play area. As the park is not that big, the main playground is also relatively close.

There are two playgrounds in Shiroyama Park in Okegawa. One is quite small, but seems very engaging for children. This is the one by the barbecue area.

The small play area right beside the playground has a climbing net, a long slide, a couple of spring rides and a small play house.

East of that there is a wading stream, part of which is right beside / parallel to part of the barbecue area. On the far side of the river there are some picnic benches under trees that you can use freely. The photo above was taken in winter 2015 so its out of season, but you can see the water area is wide and shallow making it ideal for small kids. Part of it is in shade. And there is also another part with some stepping stones.

As I update this in 2020, the “new” playground is now five years old. But the equipment has maintained its condition and color! However, the two tunnel slides were sealed off today. Whether they are temporarily closed or if they are to be removed, remains to be seen.

The playground is by the tennis courts, near the main parking area off route 12. It isn’t too expansive, is in the sun, but surrounded by trees so you can find some shade. Making it a good playground even on a hot summers day. It has a sandpit which is always a hit with preschoolers or younger.  When my kids were younger and ranging from 0 to 5 years old, I really liked that there was something for each of them. Then five year old really liked the flying fox and climbing bars. My then four year old liked the see saw and climbing wall. Then two year old likes the seesaw and climbing net. And my youngest, then in a stroller, liked the view! They all loved the sandpit that has two sliding tunnels, which are currently off limits. Just the tunnels, the sand pit can still be used.

Five years later and my older three children have outgrown the playground, but they still enjoy kicking a ball around in the wide courtyard or picnicking under the cherry blossom trees.

Shiroyama Park has dozens of beautiful mature somei yoshino cherry blossom trees. They are located beside the main playground. During the bloom season they put up festival lanterns and light them at night. They also have about a dozen “jyugatsu sakura” October cherry blossom trees on the North end of the park, behind the lake and look out that marks the site of the old castle.

On the north end of the park there is a flower garden with seasonal blooms. It is not particularly large, but it is well kept. There are different flowers every season. There is also a few plum blossoms and wintersweet trees in this area. The garden is between the winter cherry blossoms and the observation deck which marks the site of the old castle. (February 2021 – they are currently doing some work on the observation deck. It is temporarily closed off to the public.)

In September, there are two sunflower fields just outside the park. If you take the side passage out of the flower garden it leads up to the sunflowers. There you can also see some red spider lilies and pink shamrock. Please note two things. One; the side passage by the flower garden has bollards at the entrance making it to narrow to push a wheelchair or stroller out. Two; as far as I know the sunflowers are not tourist sunflower fields, so you can’t walk among them or pick them.

If you are in the area at the end of February or early March I highly recommend you check out the nearby Kawazuzakura. Likewise, in June in the same area, the hydrangea are beautiful.

There is a cot in the toilet for the disabled for changing nappies, but to be honest the park’s toilets could do with an upgrade!  have been upgraded. 🙂

By car it is 5 minutes from the Okegawa – Kitamoto interchange on the Ken-O Expressway. It takes one hour by car from Tokyo. Parking and most of the facilities in Okegawa are free.