In: SHRINES & TEMPLES, Spring, Things to do in Saitama, Things to see in Saitama
Tagged: Hanno | Hidaka | Iruma, Nablopomo, saitama with kids
With: 2 Comments 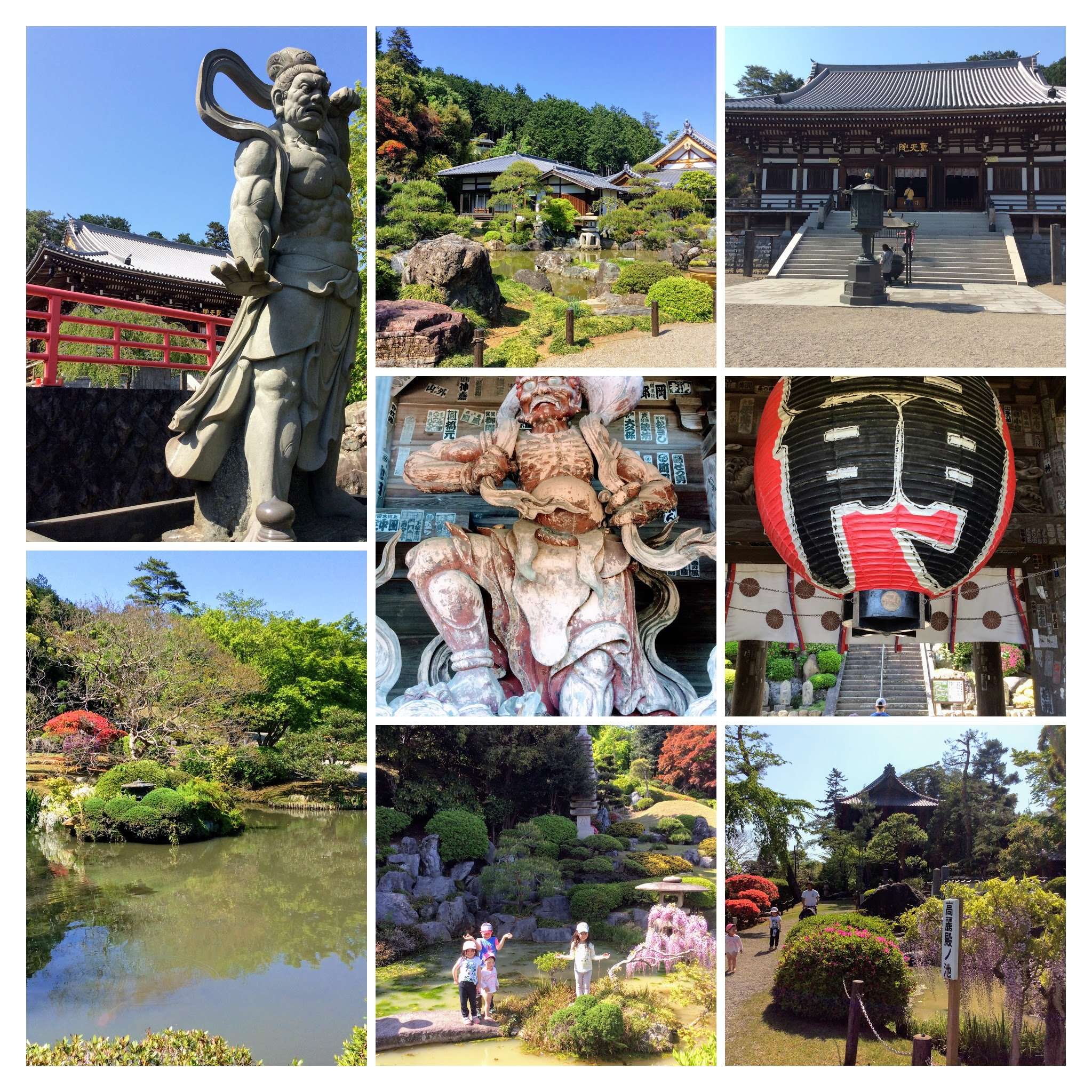 Komazan Shoden-in Shorakuji commonly spelt Shotenin in English stands proud at the top of the Koma peak in Hidaka. It is like a beacon for all enthralled by religious architecture. It is easy to spot it from a distance with its impressive temple structure, but more so thanks to the vibrant red fence surrounding it. However, when you get onto the lower temple grounds, the temple is hidden by the lush shrubbery decorating the cliff front. The temple grounds are picturesque all year round. I personally prefer it in late spring when the azalea are in bloom, but it looks magnificent in spring too:

For many years when we’d pass Shoden-in Temple on our way to Yokoze or Chichibu the formidable edifice beseeched me to embrace its magical charm. But we were always rushing to beat the bumper-to-bumper traffic that builds further down the road on route 299.

All that time I assumed this remarkable hilltop building was the famous Koma Shrine. It wasn’t until we finally visited the real Koma shrine, and I was sorely disappointed, that I realised it was another sanctuary, although the two are closely related. Both with Korean ties and history dating back to the 7th and 8th centuries.

The Koma Shrine and Shoden Temple are no more than a kilometer apart. If you use the footpath linking them you can walk easily walk between them. Koma Shrine is much better known than “Shotenin”, although the grounds of the latter are incalculably more aesthetic than the former.

The car park is on the flatland just off the main road. The outer garden is right in front of the car park. A bridge over a beautiful pond in the garden leads to a few steps up to the outer gate.

The gardens are beautiful all year round, but we were lucky that when we visited in early May that the Azalea and wisteria were in bloom. And that the new green and moss were coming into their prime. To one side of the garden is the resting place of the founder of the Koma community. The outer gate is located within the garden:

The outer gate of the Shoden-in temple is as ancient as the temple itself. Although, it did recently undergo a restoration. The lower chinese character on the paper lantern pictured above reads “gate”. The demonic looking creatures are actually protectors of the temple. Behind the gate steps lead up to the inner gate:

The main stairs and a side stairs to the inner gate of Shoden Temple are quite steep. They are worth the climb, not just for the temple but for the view. And the view is even better when you get up to the temple itself.

At this level is the inner gate where you can pay to enter the rest of the temple grounds.  The photo above is the area around the inner wall with azalea and wisteria in bloom.

Just after the gate is the stunning inner garden and pond. On the left is the temple hall containing an enshrined image of Amitabha. There is an area here to wash your hands and rinse your mouth before praying. To the side is one of the graveyards of the temple.  There is a statue of panda in front of this graveyard which seems to be for babies.  There is a much larger graveyard behind this one, sectioned off from the rest of the temple grounds. It protects the bones of thousands of Koreans.

Behind the graves is the long and steep stairs to the temple. At the top of the stairs there are two statues which information online implied are legendary Korean kings.  However, I think they are also Nio guardians. Even though they are very different to the guardians at the gate. You also can catch your first glimpse of the body of the temple rather than just the roof as you approach the top of the stairs. At the very top the secluded temple finally greets you.

The temple goes by many names. Hidaka City gives it the name of Komazan Shoden’in Shorakuji. The temple itself uses Shoudenin for its website. But by and large Shoden-in is the most commonly used. However, Google trends spells it Shotenin. Like Koma Shrine it was founded, built and used by the Korean community in ancient times:

In 716 A.D., Jakko, also called Koma no Kokishi Jakko, was instructed to gather the 1,799 Goguryeo refugees from all over Japan and settle them in the wilderness of the Musashino Plain with a commanding view of the mountains (now known as Hidaka). Jakko was to be their tribal chief and representative. When Jakko passed away, the Koma Shrine was built to remember him. Next to the Koma Shrine, settlers from Goguryeo founded the the Shoden-in Buddhist Temple to mark Jakko’s tomb. For centuries, they thrived in the area and kept within their own clan. The Koma Shrine remains a symbol of the ancient ties between Korea and Japan.

The viewing deck is beside the temple. You can look down at the Shotenin temple grounds below as well as over the Musashino plains. Hidaka is sprawled about below with Hanno and other parts of Saitama visible to the left.