In: Learn in Saitama, Museums
Tagged: Only in Saitama, Rainy season, Toda | Warabi | Kawaguchi
With: 6 Comments 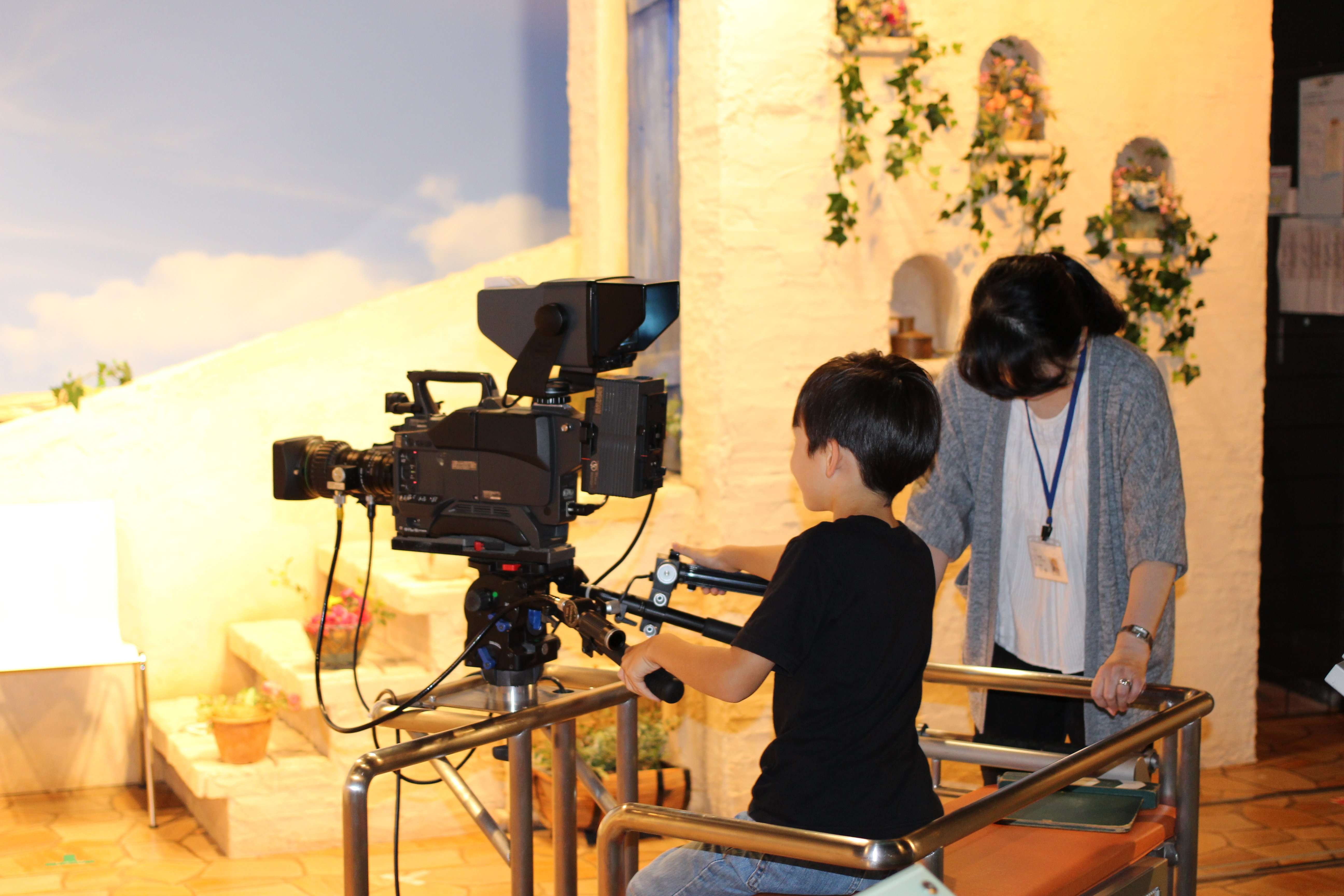 Kawaguchi, Saitama.  A national holiday that falls on a Saturday usually equates full car parking lots, queues for entry, crowds and general pandemonium. So when we arrived at Skip City without encountering a traffic jam, secured a parking spot in a half empty parking lot, with no entry queues nor barely a sinner in sight, I worried that we had chosen the wrong location for a 2 hour long journey on a rare day off.  However, it turned out to be a blessing in disguise that we chose Skip City. Not only was it worth the long journey but the facilities far exceeded our expectations and the kids and I really enjoyed our one day family trip to Kawaguchi.

Skip City is a large facility with a number of educational facilities in a concentrated area in suburban Kawaguchi. It is home to the Kawaguchi Science Museum “Science World“, the NHK (Japan’s National Broadcasting Service) Public Archives Library, Life Science centre “Sai no Kuni Kurashi Plaza” and the Visual Museum. Our main objective for visiting was to tour the Visual Museum and enjoy its current pop-up event “Magikureal” aka Magic + Real Virtual and Augment Reality. We popped into the other facilities too, but we spent a good five hours in the Visual Museum. A lot of that time was spent on recording our own DVD to take home.

Japan’s First Interactive Museum of the history and principles of image and the process of filmmaking.

For me the most significant feature of the museum, and for kids it is most certainly the highlight, is the recording sessions where professionals film you in their 3rd floor studios.  It involves filming four different segments in three different studios with a professional directing and recording you. It is free to take part for both adults and children, but if you would like to have a keepsake DVD of the recordings it only 500 yen for one DVD. The basic programme is the same all year round; a newscast, a weather forecast,  a song & dance segment and an “acting” segment.

You get to see the process of how they film the real news, weather forecast, children’s programme and fictional or animated programmes. For example, when you are recording the weather forecast segment the backdrop is a greenscreen (but actually blue!) . You can see the weather map and yourself in relation to it, on a monitor in front of you just like in a real weather forecast recording. They are fully equipped filming studios with all the trimmings; lights, cameras, action… and sound, visual effects, costumes… even a clapperboard!

How to take part

To take part in this fantastic experience you need to write your name on a list. They only take a certain number of people per session. When the list is full you have to wait until the next appointed time to put your name down. They have about three sessions a day. The news-casting is done in the main, largest studio, “301” as you enter the 3rd floor from either the elevator or stairs. That is done by the order of names on the list; they have it timed very well so they will tell you what time your session will be.

The weather forecast and singing session are done together in either Studio 302 or 303 and you can record it whenever the studio is free. The acting segment is done last and starts after the newscasting sessions have been completed by everyone on the list. They put a sign up with the estimated time of commencement and people start lining up 10 minutes before that time.

There is a bit of waiting between recording sessions. There are graphic design computers are in the area and you don’t feel the time go if you are messing about on them. You get your DVD at the first recording session and you need to hand it in for each recording. After you have completed all recordings you bring the DVD up to the 4th floor. There an editor makes the final cuts. It takes about 10 minutes. You pay when the DVD is fully completed.

Our day ended with this unique and rare experience which actually taught my kids a lot and gave them memories for a lifetime, but it had started the floor below in the main exhibit hall. The 2nd floor isn’t that big, but what they have is largely interactive. This floor has an exhibit that grants the opportunity to be behind the camera rather than in front of it.

Surprisingly (which was the word of the day) we didn’t have to queue for this experience. My three older children got to take a go each rather than sharing a go which often happens when a place we visit is busy. The camera is an actual real life filming camera on rollers in a small film set. A staff member pushes you along just like in a real set, so that you can film your actors moving between two rooms. This was my kids second favourite exhibit in the museum.

Their third favourite was a car with a greenscreen behind them with an onscreen in front depicting the projected set. There are a number of other interactive exhibits on this floor that show how sound, motion, light, projection mapping and many other elements of behind the scenes filming and recording work.

After we had toured the second floor (the first floor of the museum) we headed up to the events corner on the third floor where the current Virtual and Augment Reality event is being held. None of my kids had experienced virtual reality before. The exhibit isn’t particularly large, but there is enough to captivate kids and adults alike. You can read more about that event in the events section of this blog.

Apart from the current pop-up event, the museum runs a number of other events such as film showings and work shops. There are a variety of film showings: some which are free, some which cost money. Then there are those that cost both money and advance booking! The latter is both a showing and a lecture.  They currently have free workshops on Saturday and Sunday mornings for primary (elementary) school aged children. Saturday’s workshop involves making a Pythagoras switch and filming it. In Sunday’s workshop children can make an animation. You need to apply in advance for a position through their homepage. The neighbouring NHK archive library also shows movies about once a week.

My kids took so much away from this hands-on, fun and interactive learning museum that I can’t fathom why it wasn’t busy.  Maybe it’s because of the mediocre reviews on Google or maybe due to a lack of advertising and word of mouth PR, but whatever the reason it worked in our favour this time. Many years ago I had read about the museum in a great little book about Saitama’s play areas (**Amazon Affiliate Link) and I diligently added it to the “places I want to go in Saitama” list, but I put it quite far down the list because I had failed to grasp the appeal of it. I have heard whispers of the Science Museum and even Kurashi Plaza, but interestingly other than that I haven’t heard much about Skip City.

Had my 8 year old not received a flyer in school about the Virtual Reality event being held there, which piqued my interest, I may not have ever of gone. We would have missed out on some great experiences and memories. I personally think that Skip City is one of those places that it is worth going out of your way to visit, even just once. With all it has to offer at reasonable costs it is one to bookmark for things to do with the kids in Saitama. Please note though that the information in all four of the attractions (Visual, Science, Life Science Museums and NHK archives) is predominantly Japanese only.

Hours: Generally open from Tuesday to Sunday with Mondays off. If a public holiday falls on a Monday then it is the following day they take off. However, sometimes they close for “Maintenance Days”. The schedule for maintenance days is provided on their website.

Website: www.skipcity.jp  They do have a basic English webpage, but it does not provide information on the events running at the museum.

No eating or drinking allowed in the museum. There are a number of rest areas in Skip City you can use. There is also a shop and restaurants near the entrance to the Visual Museum. You can come and go from the museum as often as you like so long as you have your ticket as proof of paying.

There is a significant and obvious lack of signposts for Skip City heading to the area. On the way home we didn’t see even one sign for the highway. My husband and I both noticed it, but the staff in Eneos whom we asked for directions, confirmed it. Supposedly it is an issue in the area. A road map or pulling in for directions might be necessary. Coming from West Saitama the nearest highway exit is Kawaguchi Nishi.

Plenty of underground parking available, both under the Visual Museum and under Kawaguchi Science Museum. It is charged at 200 yen per hour.

From Kawaguchi Station East exit get a bus from either bus stop 7, 8 or 9 to 総合高校. Skip City is a 5 minute walk from the bus stop.

10 most recent “Learn in Saitama” posts