In: Learn in Saitama, Things to do in Saitama
Tagged: Ikoka, something different
With: 2 Comments 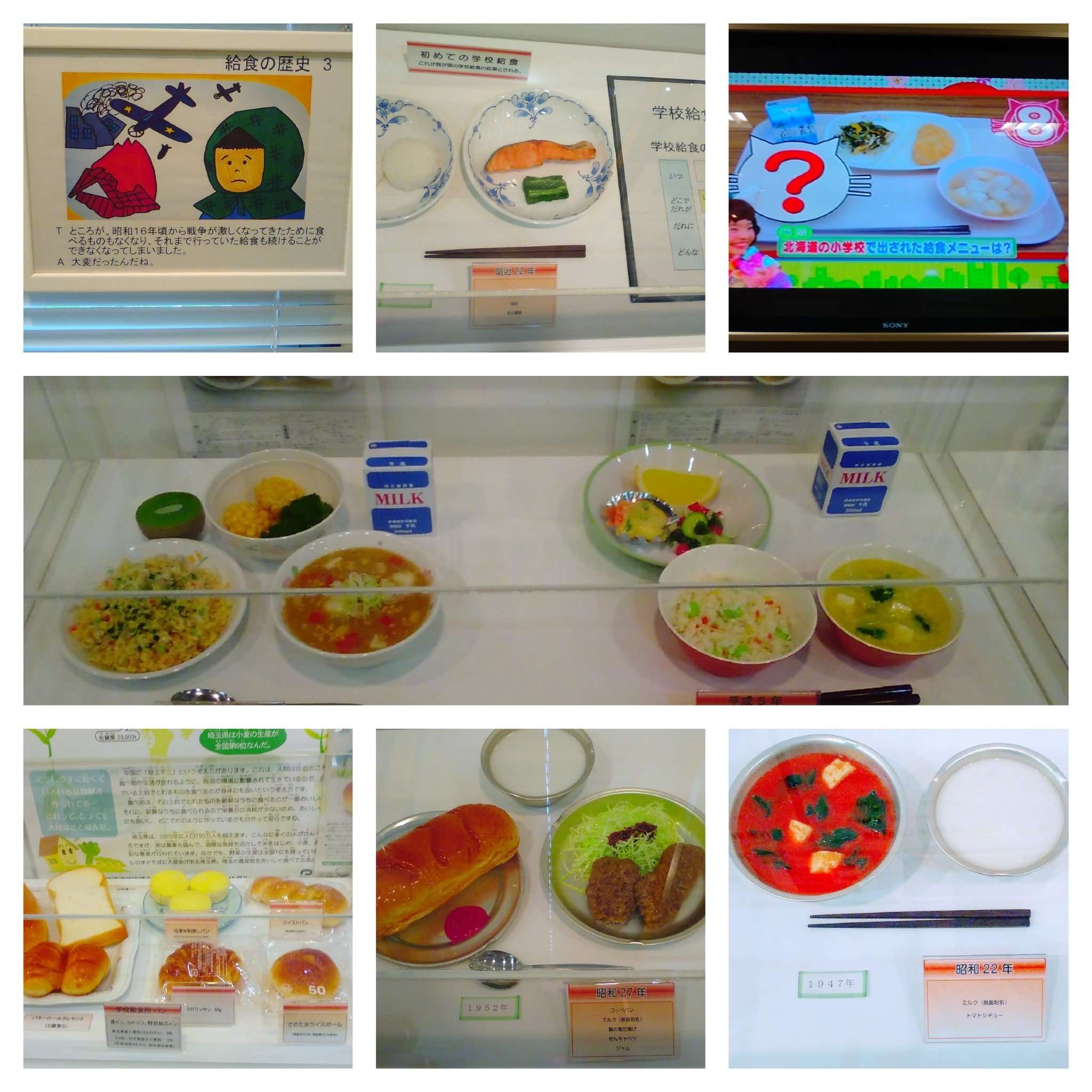 School Lunch Japan – The School Lunch History Hall in Kitamoto although small is a surprisingly interesting history hall chronicling the evolution of school lunch in Japan. The building is just one floor, which only requires about half an hour to visit for an adult. With children you could spend about an hour if you chose to watch one of the children’s documentaries about school lunch and / or use the reading corner.

The School Lunch History Hall showcases plastic sample models of various school lunches throughout the years. They don’t show every year, but they show the very first school lunch and after that years with changes of interest as well as more displays for recent years.  In the photo above you can see a wax model of the first school lunch which was introduced in Yamagata in the Meiji Period, 126 years ago in 1889.

Apart from the plastic models of the lunch they have information displays with historical information about certain periods. The section I personally found most captivating and more upsetting than I had expected, was the display about school lunches during the war. I didn’t know that the Government stopped funding school lunches in 1941.  Despite the lack of funds and support from the Government some schools provided a very basic lunch during World War II:

As part of the display they have a quiz about the period. The answers are right beside it. The information is in Japanese only unfortunately. On the left the quiz challenges readers to consider when school lunch started up again after World War II, suggesting, for example, dates such as the day the war ended or children’s day the next year. It gives four answers to mull over and the correct answer is provided on the right. It wasn’t until a year and four months after the war and initially it was in Yokohama only. A week later school lunch restarted in Saitama for 60,000 children in 51 schools in 5 cities; Urawa, Kawaguchi, Kawagoe, Omiya and Kumigaya.

Directly after the war the school lunch hadn’t improved much on the basic lunch given during the war. As you can see in the photo above, the soup size is slightly larger and a bowl of milk was introduced.

Gradually both support and influence came from America. Bread became a regular feature of the school lunch in the fifties as a result.

It is still a frequent and popular part of school lunches today.

You can see the evolution of milk as part of school lunches in the hall too. First the milk was presented in bowls, then bottles, then plastic type packages and then cartons as they have today. At one point in the seventies juice was also given with school lunch.

School lunches from around the world

I was most surprised to see a display about Ireland at the history hall. Ireland is very rarely mentioned in Japan, let alone featured in an educational facility. It turns out it was for the soccer world cup hosted here in 2002. They invited some Irish supporters to the school lunch history hall to sample a Japanese school lunch.  They designed it based on the popular diet at home in Ireland, where we also eat a lot of salmon like the Japanese.

My kids particularly liked the learning room which is set up like an old school room with wooden desks and chairs. There is a large screen here where you can watch one of a handful of documentaries. The Custodian chose a child friendly colourful and fun interactive quiz documentary for my kids to watch which included tidbits of information about school lunches around the country, such as prefectures with unusual ingredients or dishes in their school lunches.

The kids learnt quite a lot from our short visit and were relatively engaged in the content on display, particularly the video we watched (pictured above). It is not somewhere I would recommend travelling a long distance for, but if you are in the area it is worth popping into.

The history hall is located at the back of Saitama’s School Lunch Center off route 312. Parking is free and plentiful. There is a bus stop nearby.

Some ideas for a one day itinerary for Kitamoto City with children:

Kitamoto General Park is near to the school lunch history hall.

Glico Pia East (The Pocky Factory)🔗 needs to be booked in advance, but it is well worth booking. It is one of the best factory tours in the Kanto Area. You can decorate your own giant Pocky at the end of the tour. The factory tour is free, but it costs 500 yen to participate in the Pocky decoration class.

Kitamoto Children’s Park🔗 is one of the best children’s parks in the area. In the summer they have a great wading river with shaded seating area beside it. There is a long roller slide and a ponpoko mountain (air trampoline) as well as regular playground equipment. They have a small “zoo” too.

In Kitamoto’s Children’s play centre🔗 kids can enjoy bouldering for free. There is also a great ball pool for toddlers and lots of toys for kids of all ages. In the same building there is a children’s library.

In spring time there are many spots with cherry blossoms, including the afore mentioned Kitamoto Children’s Park. One of Japan’s oldest and most revered cherry blossom trees is in Kitamoto too🔗.