12 things to do in Saitama this February

In: ACTIVITIES, Learn in Saitama, Seasonal, Spring, Things to do in Saitama, Winter
Tagged: February in Japan, saitama with kids
With: 2 Comments 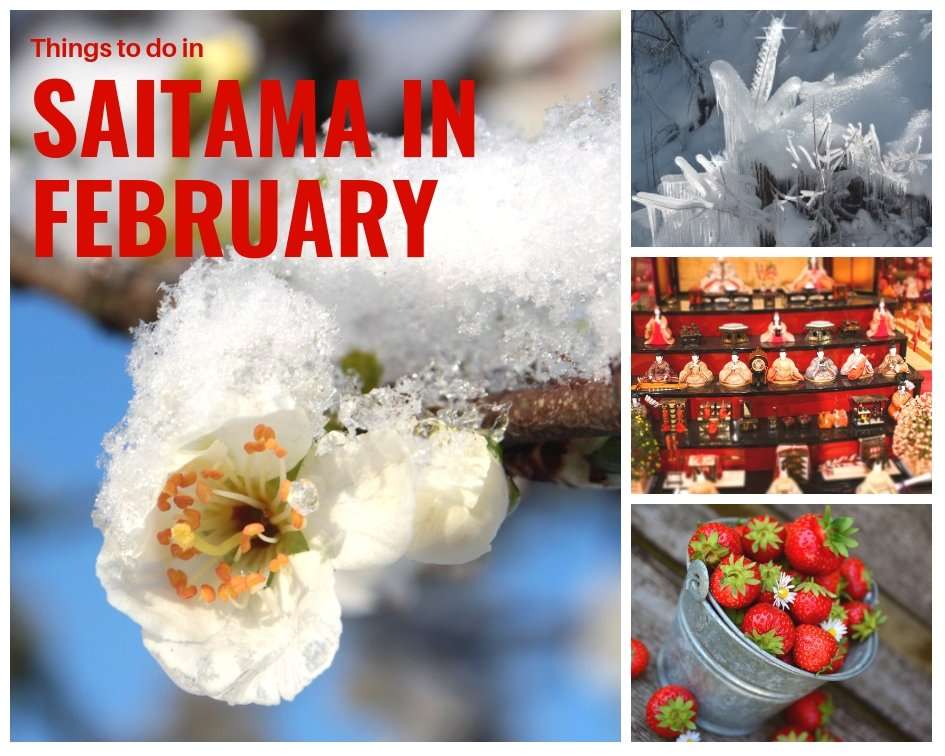 February in Saitama. There are some exclusive events and seasonal traditions that you can enjoy in Japan in the month of February. Below is a list of 12 things you can do in Saitama in February. Each idea has a few examples so there are over 25 places listed and mapped. Some of these events are only available during this month or for a limited period. In addition, all the places listed below are commutable from Tokyo and are ideal for a day trip from Tokyo.

The only-in-Japan tradition of Setsubun is on February 3rd annually. However, in 2021 it falls on February 2nd for the first time in 124 years. One of the customs of Setsubun is to catch beans for good luck at a temple. Several of the larger temples also throw other goodies such as amulets and even money. Moreover, there are many temples around Saitama where you can enjoy this fun and unique Japanese ritual.

One of the most famous places for Setsubun in Saitama is the highly entertaining setsubun event in Kazo. Two other popular spots are also featured on this blog. That is, Kitain Temple in Kawagoe and the other is Yakyu Inari shrine in Higashimatsuyama. But Kijin Temple in Ranzan is the most special place to celebrate this only in Japan event as it is the temple of demons!

2.Take in the Illumination

Date: until mid to end of February

If you haven’t already been, February is the last chance for many locations in Saitama. However, please note, a lot of the winter illumination typically ends on Valentine’s day.

Winter illumination spots that will end in February:

3.Be awed by Icicles

Date: until mid to end of February

There are three renowned places to view icicles in Saitama: Ashigakubo, Misotsuchi and Onouchi Hyakkei Icicles. Furthermore, all are in the Chichibu area of Saitama. Moreover, this seasonal natural phenomena can only be seen in January and February each year. They each have a night light up event too on specific dates during the open season.

Ashigakubo icicles are on view until the end of February. Moreover, they are normally lit up at weekends during this period. Misotsuchi icicles open to the public until mid February. Furthermore, they are lit up at night until around February 11th. When the light up is on at these places there are extended opening hours. Onouchi Hyakkei icicles do not have a fixed closing date. That is to say, it depends on the conditions. However, light up at the Onouchi Hyakkei icicles is usually for the first two weekends of February.

The doll’s festival is celebrated annually on girl’s day, March 3rd. However, several tourist spots start showing their Japanese dolls, “hina”, from early to mid February. Moreover, Saitama is home to the largest doll pyramid in the world. In Konosu you can see this aptly named “surprising dolls’ festival” pyramid display from the middle of February:

Wintersweet, roubai in Japanese, is a tree that blooms in winter. You can usually start seeing and smelling the beautiful yellow bloom from early January. But prime viewing in Saitama is late January to early February. There are wintersweet in various areas of Saitama. However, the Wintersweet gardens in Nagatoro are probably the most famous. The wintersweet are in the Hodosan Wintersweet Garden, which is accessible by hike or by ropeway.

6.Ride through the Plum Blossoms

Saitama prefecture has several seasonal outdoor ice rinks. They are usually open to the public during the winter months. Most are artificial, with the only natural outdoor ice rink in Tokigawa (closed in 2021 on account of the coronavirus). That one closes earlier than the others in early February. Moreover, the popular artificial rink in Koshigaya Lake Town is also closed in 2021. However, Kawaguchi green center is open until around the end of February.

Another of the ongoing winter events in Saitama is the animal hot springs. You can see Capybara enjoying an onsen in both the Saitama Children’s zoo and Chikozan Park zoo. The latter, Chikozan, also has a seasonal Japanese monkey onsen:

Of course, it is also a great month to indulge in one yourself! Why not try one of these award winning hot springs in Saitama:

10.Indulge in a Pop up cafe

Pop up cafes are rare in Saitama. Normally, we have to travel into Tokyo to enjoy a limited period pop up cafe or restaurant. But for three weeks in February there is normally a rare opportunity to indulge in an exclusive cafe in Koshigaya. At Lake Town Koshigaya. In 2019 it was the Hamtaro (Hamutaro) cafe. In 2020, it was the Sailor Moon cafe. Its too early to tell yet, but I wonder what pop up cafe will come to Koshigaya in 2021!

National Foundation day, Kenkoku Kinen no Hi, celebrates the founding of Japan and subsequently the accession of the first emperor “Jimmu” on this day in 660 BC. There are normally several events on this day annually. For example, one of the more quintessentially traditional events on is Amazake. There are Amazake festivals in various locations in Saitama, but the one in Sayama City is particularly special. Kawagoe also has an amazake festival. The special feature of the one in Kawagoe is they also have a bow ceremony.

12.Do Valentine’s the Japanese way

Only women give to men on February 14th! Furthermore, in return, men give to women on White Day. (Apologies – I had this the wrong way round in the original post). For the lead up to Valentine’s and sometimes the other side of Valentine’s day also, you can enjoy Valentine’s dessert buffets in restaurants and hotels around the prefecture. One of the more popular ones, for example, is at Shikitei Restaurant in Omiya.

Whatever you do in February, I hope you have a great one!