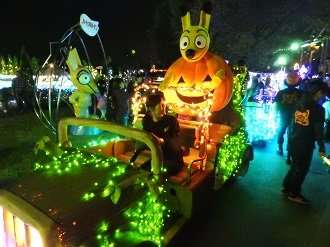 Tobu Zoo will revive both the Night Zoo and Halloween parade for the first time in two years. From October 2nd to October 31st, on Saturday and Sunday nights only, the Tobu Zoo will be open an extra two hours, until 7 pm, for the night time events. You can get a discounted night ticket that allows entry from 3 pm until the 7 pm closing time.

During this period they will have special night time animal feedings. You can feed the elephants, penguins and white tigers dinner for an additional fee. On the five Saturdays of October there will also be night time talks from the keepers of certain pens including penguins, rhinoceros, lions and white tigers.

The zoo will have Halloween displays throughout the month of October. Also, they have a limited Halloween addition menu in the cafes and restaurants in ‘heartful town’. Furthermore, the popular Halloween night parades will be on every Saturday night in October. However, unlike previous years there is currently no mention of a costume event. In previous years they offered free entry if you arrived in costume, but currently there is no mention of that for 2021.

In addition to the above, the amusements and the Heartful Garden are lit up. Pumpkins and ghosts made of LED lights adorn the amusement park for the event. On the night of October 30th they will have further Halloween celebrations including a pumpkin feast for some of the animals. There is currently no word on whether they will also have their usual large night illumination event. Before Covid it used to start on Halloween weekend. However, last year it didn’t start until late in November. Unfortunately they have announced already that they will not have their popular autumn fireworks this year.

Car: about 15 kilometers from the Kuki Interchange on the Tohoku highway. Parking for 3000 cars, costs 1000 yen for the day.