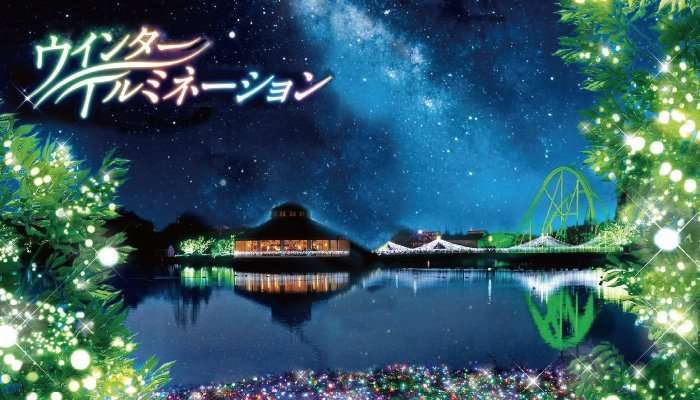 Please note for the month of November – with the exception of Saitama Citizen’s Day – the illumination is only on at the weekends. Likewise, from January 11th until the display ends on February 13th, you can only see it on the weekends and public holiday. The display is on daily from December 4th to January 10th, with the exception of January 1st as the zoo will close for New Year’s Day. The illumination stays on until 8 pm except. On Christmas Eve and Christmas night it is extended an hour, to 9 pm.

The park uses smoke, light and music to add to the ambiance of the night illumination. The illumination involves a LED vision performance laser and projection mapping show, that is the largest of its kind in the Kanto area. (Kanto is the area comprising Tokyo and the surrounding six prefectures of Saitama, Gunma, Ibaraki, Tochigi, Kanagawa and Chiba). It promises to be a mind blowing display.

They use over 3,000,000 lights to create an illuminated flower garden in Heartful Garden. The area covers 8,000 meter squared. They still haven’t released the precise information for 2020 / 2021. But in previous years kids could enjoy animals made out of flowers and/or light, snowmen and winter scenes. Couples could walk in a tunnel of love, “Love Lock”, built especially for the occasion, and take in the romantic atmosphere of the park lit up at night. They also have a relatively new area (started 2018) representing the flowers of the four seasons.

Tobu zoo have a smaller illumination event for Halloween. Information for that here.

November – weekends from 5 pm to 8 pm

December – daily from December 4th to 31st until 8 pm, except for Christmas Eve and Christmas day when the illumination stays on until 9 pm

January – daily from January 2nd to January 10th (the zoo closes on New Year’s Day). From January 11th until February 13th the illumination is on weekends only.

Car:
Approximately 15 kilometers from the Kuki Interchange on the Tohoku highway. Parking for 3000 cars, costs 1000 yen for the day.

They normally open a dedicated website for the illumination. They have said they will this year too, but it is not yet ready. You can currently see the event information on the zoo’s official website. The featured image was taken from the zoo’s site around 2016.

Even more information about Tobu Zoo

Other Illumination events already confirmed for Saitama in 2021 / 2022: