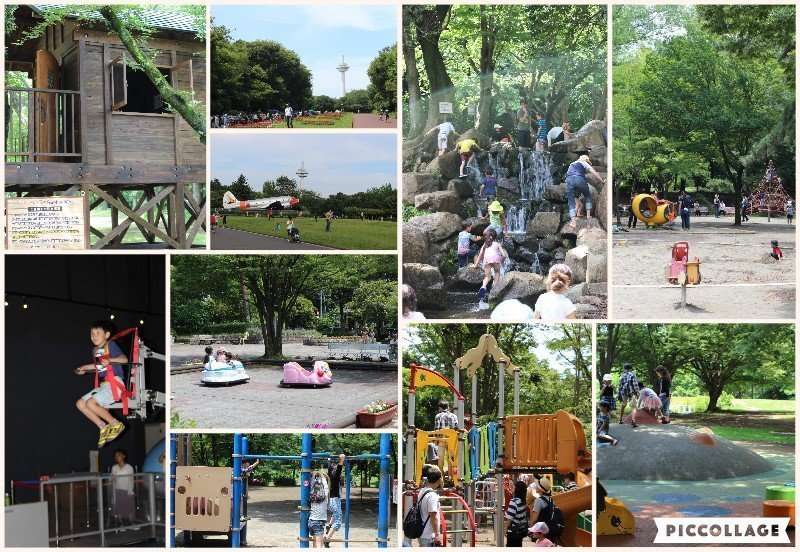 Tokorozawa Aviation Memorial Park is one of Saitama’s better known attractions. It has been around for a long time and given its proximity to Tokyo and other popular tourist areas, it has always enjoyed a steady flow of customers and great reviews. It is a great place for a family day out, especially on a fine day, but it is suited to a rainy day too.

The aviation memorial park is a really fun park for families. On the weekend the park has a really lively atmosphere thanks to its popularity. Despite the throes of people, the park never feels too full. And thanks to the selection of play equipment, the kids rarely have to queue to use the equipment. The one exception to this is the swings; there is usually a wait to use the swings.

It is one of the better playgrounds in the area and is suited to kids of all ages, but they have particularly accommodated the little ones. The playground has many different parts centered in the one children’s area. There is a large sand pit as you enter the playground from the nearest car park. To the left of that there is a small wooden athletic area with leap frog type poles, stepping stones and balancing beams.

The playground has lots of climbing equipment including a spider net climbing frame, which thankfully isn’t too tall.

Other climbing equipment includes various challenging shapes and structures. There are monkey bars too, and they are low to the ground making them accessible (and safer) for smaller children. The swings are up a few steps from the main piece of combination equipment. It has gymnastic bars beside them and spring rides in front of them. There is a wide cement ride too. Nearby there is a flying fox. And behind that down a few steps is an area for toddlers with padded flooring, colorful motifs and low equipment for even the smallest of children.

Slightly separated from the playground near the number three entrance / exit there is a tree house children / people can use freely. There are coin operated battery cars in two different areas of the park. Throughout the park there are a number of open spaces where you can throw a ball, play games, picnic, barbecue and just enjoy green space. They also have a number of areas where you can ride a bike or strider. In the summer there is a wading river:

We particularly like this park on a hot and sunny day as there is great shade from mature trees. At least half of the playground is in shade at all times. Also, in the late spring and summer, there is a nice wading river which has some really good shade in parts. You can pitch a small tent and have a barbecue in the area too. And on weekends they have a food van selling ice-cream and kakikori (shaved ice). In August, there are sunflowers in bloom.

There is an open live stage space too within the park. The park hosts a number of events throughout the year. Some in the stage area, some in other parts of the park. The popular flea markets are held on the main avenue that stretches from the south to the north. Another popular event, which is held in conjunction with (and in front of) the Aviation Museum, is the monthly hot air balloon ride:

Facilities in the park

The park has lots of toilets, benches and water fountains. There are vending machines in at least three different locations which sell not only drinks, but ice-cream too. There are also some cafes and restaurants, as well as other facilities including:

The very first time we went to the aviation museum it was a flop, because quite simply our kids were too young at the time. We only had two then and they were 1 and 2 years old. They’ve added some new attractions and upgraded others in the years since then, and now my kids of 3, 5, 7 and 8 years old love it. More detail in the Tokorozawa Aviation Museum post, but here are the highlights:

The Seibu Shinjuku line’s Kuukou Park station 「空港公園」・「くうこうこうえん」is right beside the number 5 entrance / exit to the park on the west side.

The park is approximately 6 kilometers from the Tokorozawa Interchange of the Kanetsu expressway along route 463.

There is parking on the North, South and East sides of the park. On the weekends the car parks can become very busy and people queue for a spot. There are alternatives with some reasonably priced coin parking lots nearby, but the parking at the aviation park is probably worth the wait as it is only 200 yen.