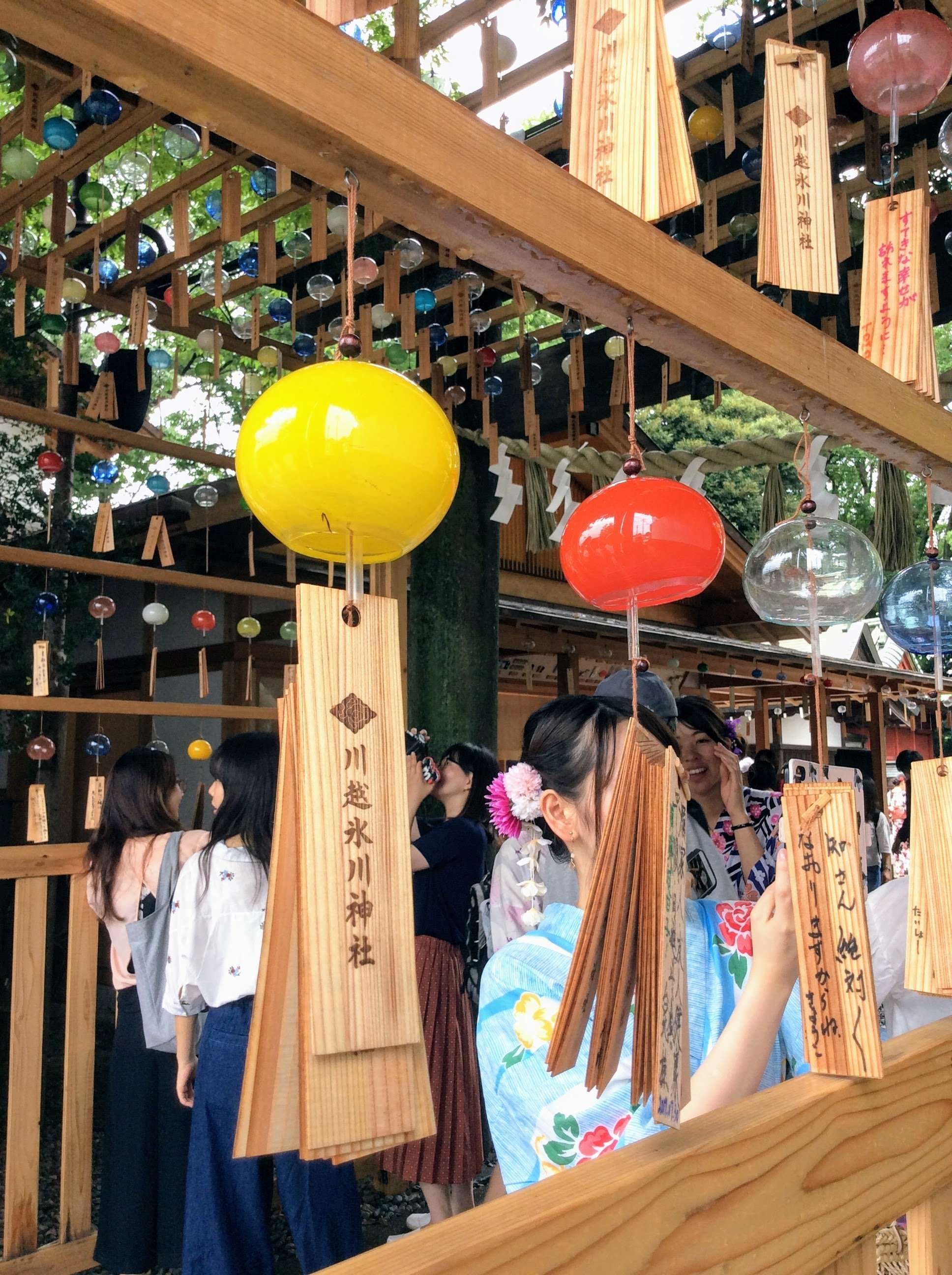 The Enmusubi Wind Chimes at Kawagoe Hikawa Shrine are generally displayed from around the 7th of July to the first week in September. They follow the lesser known pinwheel event. However, in 2020, the annual June pinwheel event was completely cancelled. Moreover, the “enmusubi festival” i.e. the wind chimes, was a much smaller display than normal. Moreover, they asked that people NOT loiter to take photos or videos. And they had no “glistening river” . However, its almost as if there is no pandemic in 2021! Almost all events at Kawagoe Hikawa Shrine are going ahead as “normal”. I totally jinxed it writing that! On June 30th as outlined above the shrine did a complete turn around. The event will now be more like 2020 than a usual year.

Please note that they are still carrying out building work on the grounds of Kawagoe Hikawa Shrine. They have torn down the old Hikawa Kaikan and are replacing it with a smaller building. The plan is to restore the rest of the area to its former natural wood state. Also, please note that as of April 2021 there are no longer official car parking areas for Kawagoe Hikawa Shrine. The former “dai ichi” car park is now a kaikan. Moreover, the large “dai ni” car park is now a charged parking lot, managed by a separate entity.

Initially, there were 888 wind chimes for the inaugural event in 2014. In Japan, 888 is considered an “angel number”. And Kawagoe Hikawa Shrine is famous for its power in love matches. For the first event 888 wind chimes were used to promote luck in love. Nowadays there are normally 2000 wind chimes displayed, including the main tunnel with the 888 chimes. However, in 2021 they have removed one of the wind chime tunnels reducing the total number of chimes.

Enmusubi means marriage or as in this case “marriage ties”. Kawagoe Hikawa Shrine is renowned for bestowing blessings in matters related to family fulfillment, perfect match couples and, as you might have guessed, marriage! People who are looking to meet a partner and / or to have a good marriage come to this shrine for a blessing.

The wind chimes initially attracted about 100,000 visitors to the shrine in the first couple of years after its inception in 2014. By 2017 that number had tripled. Before the pandemic the locals were saying around 1,000,000 people had visited. I well believe it as I visit it often and it is always busy during the enmusubi wind chime period. Other times of the year that it is particularly busy is New Years and during the 7-5-3 festival.

NOT AVAILABLE IN 2021 and it was also cancelled in 2020. During the period that the chimes are on display you can visit the shrine until 9 pm at night. They light up the small river and chimes from around 7 pm. The “glistening river” Hikaru Kawa uses projection mapping and dry ice to create the image of the Milky Way.

I usually recommend visiting on August 7th which is when Kawagoe Hikawa Shrine celebrate their Tanabata festival too. (Some places celebrate on July 7th). During this time you can also see beautiful colour strips on bamboo displays. However, it is not yet known if they will also go ahead with the Tanabata Festival. Only time will tell.

Here is a first hand account of visiting the wind chimes at Kawagoe. And here is an account and many more photos of the “glistening river”, the wind chimes, the love light balls and the shrine at night:

Koedo Kawagoe bus one day pass allows you unlimited travel on the Koedo Kawagoe buses. It costs 300 yen. In the bus they have a monitor with sightseeing information.  Some tourist places give discounts on souvenirs or entrance tickets to people with a one day pass.

Koedo Meguri (Loop) Bus from Kawagoe station. You can buy a one day pass that allows you unlimited travel on the Meguri Bus. It stops at 16 different locations. 104 different shops, offer discount services such as souvenirs, food, and entrance fees to facilities for holders of this day pass. There are announcements in English and Chinese as well as Japanese so foreigners can feel at ease. More information here.

Kawagoe Hikawa Shrine is off route 254 close to where it merges with route 16. Please note there is no longer a parking lot at Kawagoe Hikawa Shrine. The old dai ni car park still exists, but it is now run by a separate entity and is charged. It costs 100 yen for half an hour.

Information for Kawagoe Hikawa Shrine’s Enmusubi Wind Chimes first appeared on Saitama With Kids blog pages in 2014 and was moved to the events section in 2017.