In: SHRINES & TEMPLES, Things to do in Saitama, Things to see in Saitama
Tagged: Higashimatsuyama
With: 2 Comments 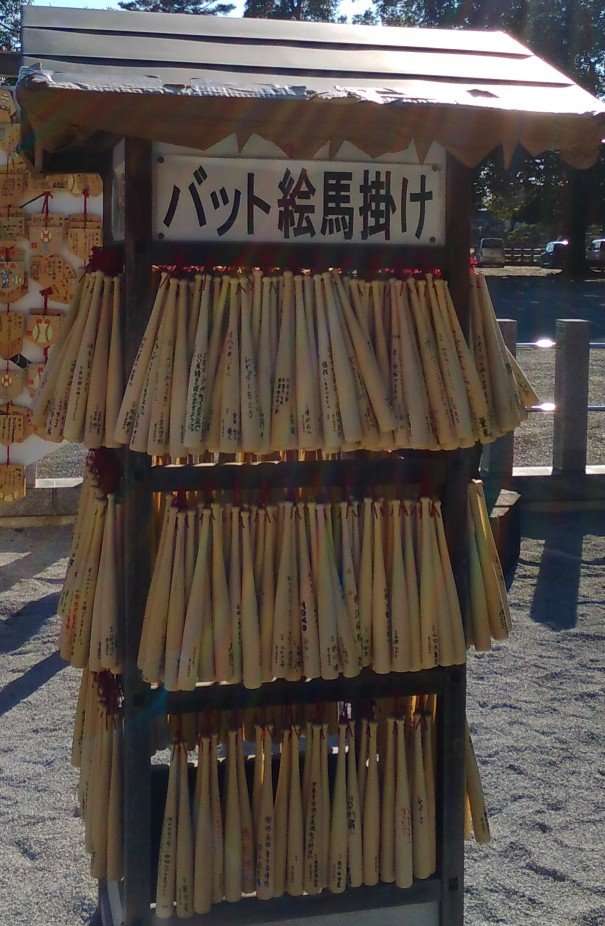 The Baseball Shrine – Yakyū Inari Shrine is located in Higashimatsuyama city in Saitama. It is just 1 hour and 10 minutes from Ikebukuro on the Tobu Tojo line.  It is one of many shrines to the God Inari. However, what makes it special is that its Chinese characters (“Yakyu” 箭弓) are pronounced the same as the Japanese for baseball (野球).  It has thus known as the baseball shrine.

The original shrine is said to have been completed in 712 A.D. The main hall was reconstructed in 1804 and the worship hall was reconstructed in 1835. The ‘yakyu’ was once written as 野久 meaning “long field”. However, after Minamoto No Yorinobu saw an arrow shaped cloud above the shrine, he commanded the name be written as 箭弓 to mean “bow and arrow”. More on the history in English from the official Higashimatsuyama tourism website.

The benevolence of the enshrined God, the Goddess of possessing food are:

The shrine itself is quite picturesque with beautiful wooden carvings. On the grounds there are several hoardings with explanations in both Japanese and English about the details of the shrine.

The photos above are from the official website (the rest are my own). They show the “ema” prayer plaques” and “omamori” amulets of the shrine. Lots of baseball fans visit the shrine to pick up a baseball shaped amulet or write on a baseball prayer plaque (Ema 絵馬) to bring good favor to their own skills or to a baseball team they support.

Moreover, during the New Year, baseball enthusiasts come from near and far to make their first prayers of the year “hatsumode” at the shrine. Supposedly even famous baseball players visit the shrine to pray for a good season.

The shrine is also popular for the setsubun bean throwing ceremony held annually on February 3rd. They have a special ceremony just for kids too. Another reason Japanese tourists visit Yakyu Shrine is to see the flowers in spring (see Peony Garden below Danjuro Shrine).

Within the grounds there is a small shrine “Danjuro Shrine” with a row of beautiful torii. It was donated by Ichikawa Danjuro of Kabuki fame. Danjuro supposedly often prayed at Yakyu Inari for success in his performances. For this reason, to this day performers still come to the shrine to pray for the same.

Higashimatsuyama city is famous for peony flowers. Japan’s largest peony garden is in Higashimatsuyama, at Botanen. There are also some peony in the garden at Yakyu Inari. Azalea and wisteria grow at the same time. The garden also has some beautiful pine trees and a water feature. For the last two weeks in April and the first week in May, thousands have people visit for the Peony Festival. During the period there are some food vans in the courtyard and there are additional events organized.

Don’t miss: next door to the shrine there is a hotel that has a lovely glamping play area for kids. There is also a small playground on the grounds of the shrine.

Open all year round.

The shrine is a five minute walk from the west exit of Higashimatsuyama station on the Tobu Tojo line.

Normally there is parking for 50 cars. However, during big events such as New Years and Setsubun they convert the playground into an overflow car park with a further 150 car parking spots.