Sakitama is the old name for Saitama Prefecture. As such, I have been intrigued by the Sakitama Tomb Park: the only area I know of that still carries the name of Sakitama. It is the type of attraction though, that I felt wouldn’t equally captivate my children. Incorporating Geocaching to our trip was the perfect incentive to get the kids on board.

Geocaching is a treasure hunt, using elements of orienteering and / or GPS to find a target physical “cache”. They are physical capsule like caches hidden in thousands of locations all around the world.

How to join / play Geocaching?

1. Go to Geocaching.com
2. Create an account and log in
3. Agree to the terms and conditions
4. Download the app OR look at the maps on the website
5. Use the search and / or map function to find a cache in your area. For the website: save the co-ordinates of the cache and / or print off map. Some are more difficult than others, with “1” being the easiest
6. Navigate to the cache – if you are using the app you can use hints to help you on your way
7. Sign your user name on the paper in the cache
8. (Optional for app users) Mark whether you did or did not find the cache
**Respect your environment, be discreet – especially around muggles! 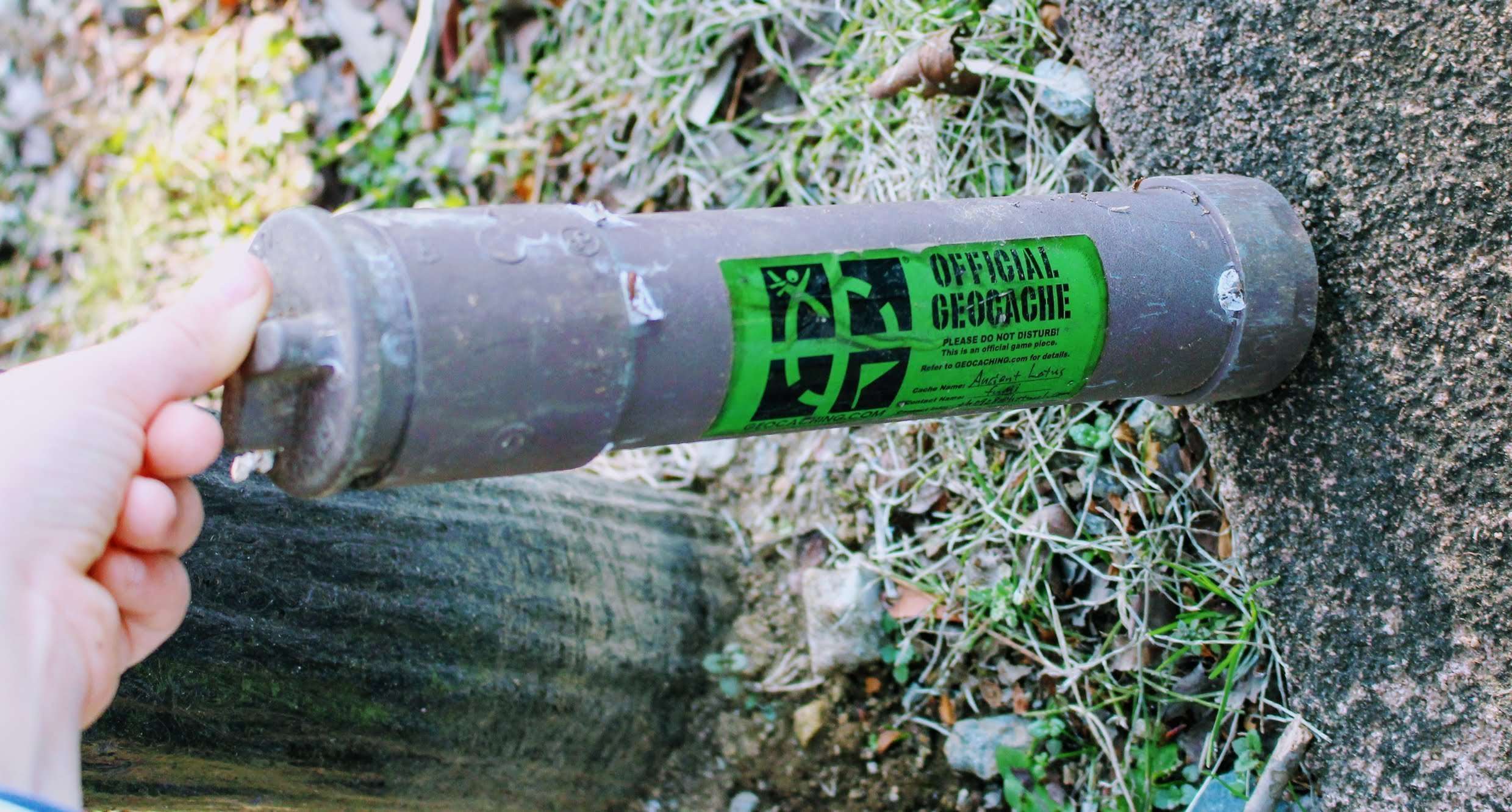 Muggles is the term used in geocaching for people who are not geocachers! It was taken from Harry Potter. When you sign your name on the paper within the cache, to indicate you have found it, you also thank the creator for the cache. You can use the acronym “TFTC” – thanks for the cache. Another useful acronym “TNLN” – took nothing left nothing;

The caches vary in size and style. Most of them are like capsules. There are official Geocaching caches which look almost like a hand explosive! Inside there is a piece of paper explaining what geocaching is, in case a non player finds it and thinks to take it home. There is also a slip of paper inside to sign your username and the date you found the cache.

Many capsules have little treasures inside. They aren’t to be taken unless you can replace them with something of equal or more value. As you get more into the game there are other elements to the capsules contents. You can find really detailed information on the Geocaching website.

In theory you don’t have to bring anything. But I would recommend for kids that they have (at the very least) gloves as more than often than not, you have to poke around. Plus you will be handling a cache that might be wet or have insect poop on it! You can use sticks for the prodding, but not for the latter.

Geocaching has actually been around for twenty years! I remember about eight / nine years ago, when it was taking the world by storm, there were only a handful of places you could find caches in Japan. They were usually at large tourist spots.

Nowadays though, there are dozens of places within each city, even town or village, that you can find caches. Back when it first hit my radar, the only place I knew of with a cache in Saitama Prefecture was Kodai Hasu No Sato, the Lotus park and home of rice paddy art, in Gyoda. That one still exists today.

One thing I would like to point out specifically for Japan is that you may want to avoid it in the summer and autumn with children. There are a lot of nasty insects in summer, and of course snakes too. In autumn, killer hornets are more likely to attack. I got stung this past Autumn while just hiking, not even prodding around for geocaching.

Geoaching Saitama: I chose Sakitama for this post about Geocaching Saitama Japan, because – in my opinion – it is a great spot for beginners. There are at least ten caches in the general vicinity of Sakitama Tomb Park and the adjacent Ancient Burial Mounds Museum. The vast majority of the cache locations are a level 1 or 1.5 – the easiest on the scale. Most of them are within a 200 meter radius of the main entrance to the park.

I can’t really say much more without giving too much away and spoiling the fun! If you’ve signed up and downloaded the app you can easily navigate to the area of the caches. Once you are in the area of the cache it will take a keen eye and / or a bit of poking around to find the cache, but once you do: guaranteed elation!

The Sakitama Tomb Park is mostly called Sakitama Kofun Park. Kofun is the Japanese for “ancient tomb”. There are nine tombs in the form of large burial mounds in the park. The Sakitama Tombs were built between the 5th and 7th centuries. It is believed that the tombs are of powerful families from the time period.

The Shogunyama ancient burial mound is particularly well known as there were several important archaeological discoveries made at the site. The Maruhakayama Kofun is to many the symbol of the park due to the stunning cherry blossom trees on top and around the mound.

Adjacent to the park, but on the far side of the road, there is the Museum of the Sakitama Ancient Burial Mounds. There is a large green area as you come into the park which you can use at your own leisure. It includes a roofed area with picnic benches and sinks for washing dishes. There are vending machines in this area. And toilets, one of several throughout the park. There is also a water fountain.

The nearest train station is quite a walk away, but there is a free city loop bus that goes from Takasaki Line Gyoda station and get off at “Sakitama Kofun Koen-Mae”. There is also a bus from Fukiage Station that goes relatively close. The bus comes around every 15 minutes during peak hours. It takes about 30 minutes and then a 15 minute walk.

2020-01-11
Previous Post: Photo Friday and 1000 Hours Outside
Next Post: Mustard Seed: an old train carriage converted into a Railway Restaurant