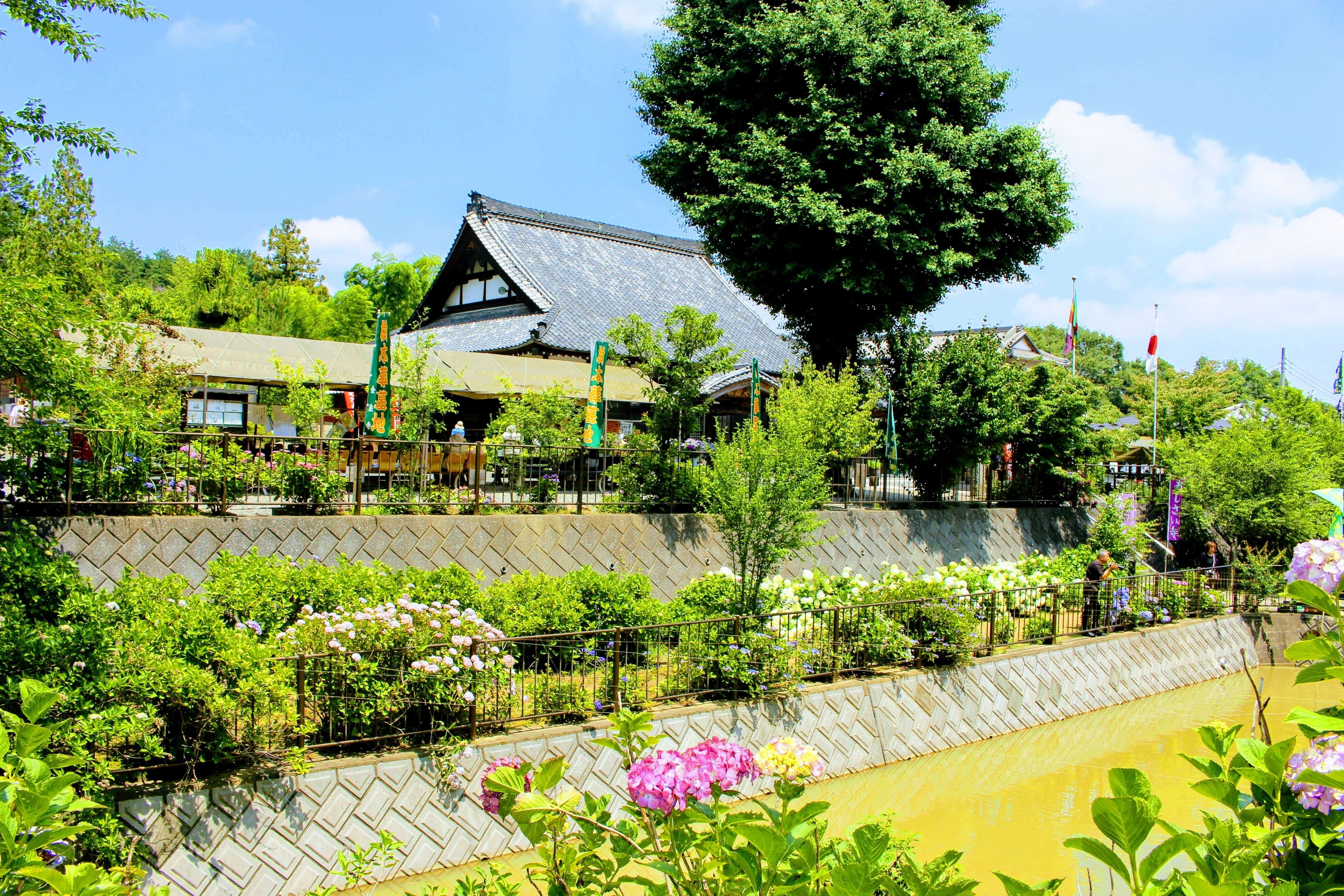 2021 information: unfortunately, just like last year, viewing of the hydrangea is not permitted in 2021 on account of the coronavirus. They apologize for any inconvenience caused. Official notification.

The hydrangea of Kinsenji Temple have created quite a name for themselves. Thanks to online videos, photos and posts, the otherwise unknown temple in bucolic Ranzan, has come into the spotlight. It is drawing more visitors annually in June, than there are flowers. And with 5,800 hydrangea to boast, that’s a lot of people flocking to the temple for worship.

Few are there to actually pay homage at the temple, but rather to regard the many-colored hydrangea that wind up and down the mount beside the temple.

There are several hydrangea around the temple too, but the majority are on the exigent hill. There are also some peruvian, orange, pink and yellow lilies dotted around the hillside. (And there is one lotus in a pond too!)

What I loved about the walk, apart from its maze like path and of course the flowers, is that they have various proverbs and sagely advice placards posted among the flowers. It became a bit of a treasure hunt for me to see how many I could find. I had counted over 50 before I realized that there were duplicates. So I don’t know how many there are, but it added intrigue to the already alluring walk.

The flowers have actually been there for the past thirty years, but it is only thanks to the viral potency of sites like Instagram that the masses have come to learn of this hydrangea temple in rural Saitama. The hydrangea of Kinsenji have created quite a social media frenzy with dozens of posts vying for a coveted spot on the hydrangea hashtag leader board.

Kinsenji is a temple of the Soto School of Zen Buddhism. The temple has been at its current location for just over 300 years. However, it was founded a further 97 years before that. It was moved when fires threatened its sanctuary. When they moved it they planted a gingko tree to afford it protection from the winds of Ranzan. That gingko tree still stands strong. And tall. It must be at least eight meters tall. I am keen to see it in its garb of gold in Autumn.

There is a playground, a play area and a basketball court on the temple grounds. The play area is shaded and has two small pieces of play equipment suited to toddlers. The playground is mainly for older children with wooden swings galore and a zip line. One of the swings can fit six kids sitting side by side!

There are rest areas in front and to the side of the temple. One of those areas has a small shop that sells kakigori. You can also buy a cooled cucumber on a stick from a help yourself cooler box in front of the temple. There is a vending machine on side of the temple, beside the lotus pond. This pond is at the path that leads to the public toilets and past them, further down the hill, is where the playground is tucked away.

Season: the whole month of June. For the last few years they have been blooming as early as the last week in May. Sometimes they stretch to early July.

There are two main entry points to the temple. I took the scenic route along a stunning old narrow country road to the North west, with only the width for one car at a time. There is easier access from the South east with a wider newer road.

The Kanetsu expressway actually runs along the West side of the temple, which you only realize when you hike up to the top of the mount and you can see it on the other side. The nearest exit is the Ranzan Ogawa Interchange. It is a five to six minute drive to the temple from that exit. There is plenty of parking and it is free.

If you are coming by public transport the easiest station to alight at is Ogawamachi Station on the Tobu Tojo line. From there you can get a bus to nearby , 三ツ沼 bus stop, and walk 1.7 kilometers to the temple. Some of the route is uphill, but it only takes about 22 minutes.

Short video from the temple on NHK World