The Story of the Forest and Lights

In: Autumn in Saitama, Seasonal, Things to do in Saitama
Tagged: Hiki District, illumination, Shinrin park, something different
With: 0 Comments 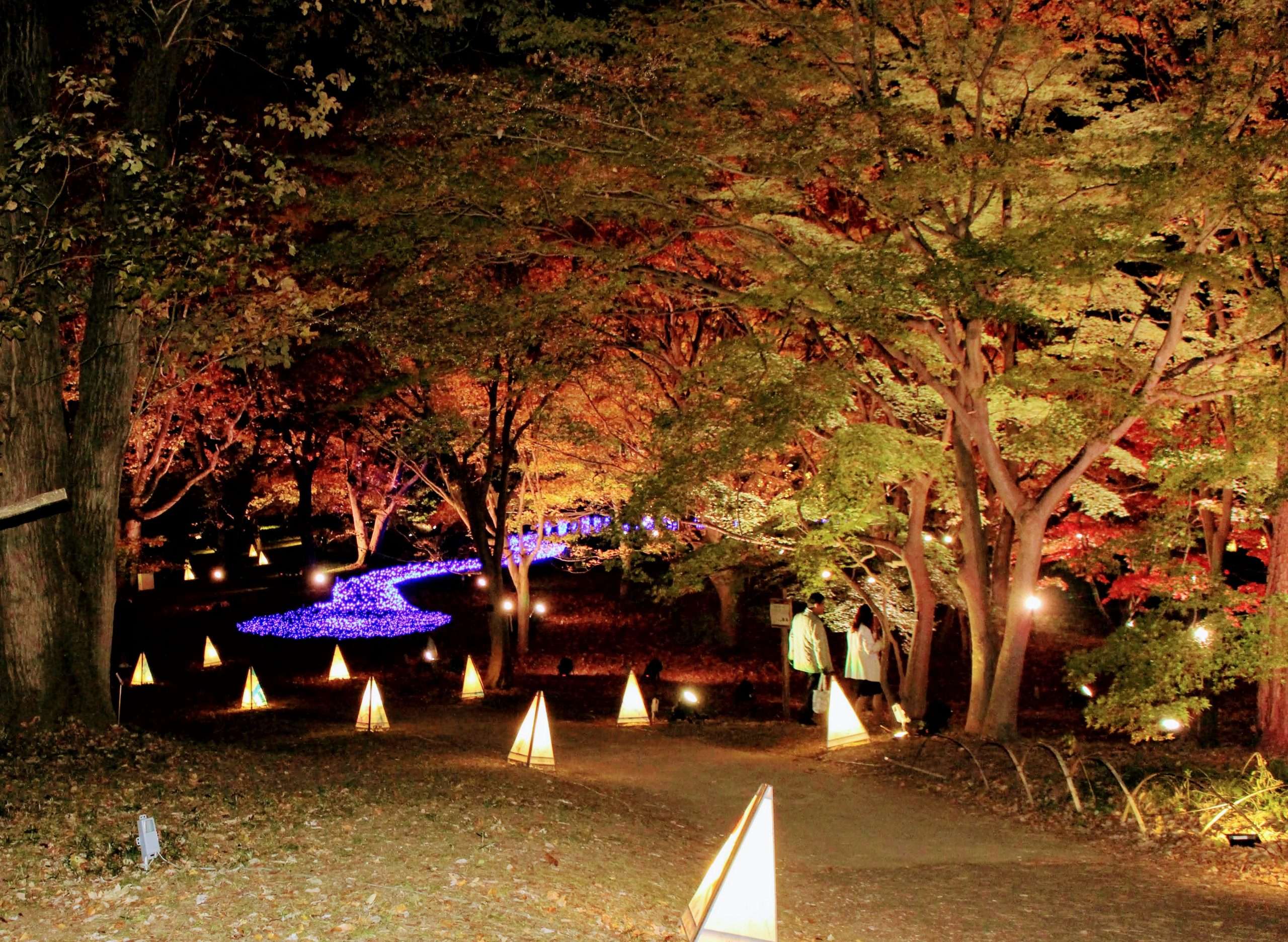 The park is huge at 304 hectares, but the light up is only in one section of the park by the central gate. Still at that it is quite a large size with different sections along the route that is just over a kilometer round trip. The route winds it way from the central gate to the Urban Arboretum.

The Story of the Forest and the Lights

The Story of the Forest and Lights is run yearly during November. It follows the Halloween light up of October. It ends on December 1st 2019 and a week later they have the last light up of the year in December called “Starlight”. It is the only one of the three light ups that you can see the light up daily (weather permitting). The others only run on weekends.

The November light up of Shinrin Park coincides with “koyo” – autumn leaves or fall foliage in English. You can see some maple trees of orange and red lit up. However, the changing of leaf colors seems to be a bit late and the best viewing (which is normally mid Autumn) probably won’t be until next week, the last week in November.

I hadn’t been to the autumn leaf light up at Shinrin Park for a few years. I usually bring the kids to the Halloween light up in October because in the past it has been more child friendly. However, this year the Autumn leaf illumination has some new features that make it very appealing to kids too.

For one, they have a stamp rally challenge. And we all know how much kids love stamp rallies. Secondly, they have made the exhibits more child friendly. Thirdly, they have mini automated shows especially for children. Two of them are outlined hereafter:

The Captain Bubbles ship is a large wooden boat designed like a pirates ship. It is on the left hand side as you come in the gate. There is a show at intervals during the night and the ship actually blows out bubbles, from a canon, accompanied by light and music.

Another key feature of the 2019 night light up at Shinrin Park is the Talking Tree. It is located at the end point, the Urban Arboretum, where you can sit indoors for a rest or to eat or join in a craft. Like the pirate ship it is an automated show at intervals during the night. A tree comes to life and talks to the audience while changing the color of the lights around him.

There are three main areas where you can purchase food or a drink during the night illumination. At the central gate there is a little shop. It has vending machines and a food van outside it too.

Just over halfway through the route there is an udon restaurant that opens late for the occasion. And at the end point there is a cafe in the Urban Arboretum. There are vending machines here too.

Each of these places have somewhere to sit outdoors and the gate shop and arboretum cafe have places to sit indoors. They also have public rest rooms. The arboretum has a small play area for toddlers.

The Story of the Forest and the Lights Information 2019

The Higashimatsuyama Interchange of the Kanetsu Expressway is approximately six kilometers from the central gate. Parking costs 300 yen for the night. It costs 500 yen for a day. There are cheaper private car parks nearby. I noticed that the 200 yen one was open tonight as I drove by. It is 200 yen for the whole day.

They run a free night shuttle bus from Shinrinkoen station on the Tobu Tojo Line for the during of the forest and lights illumination period. The timetable (left hand side times are from the station, right hand side from the park):