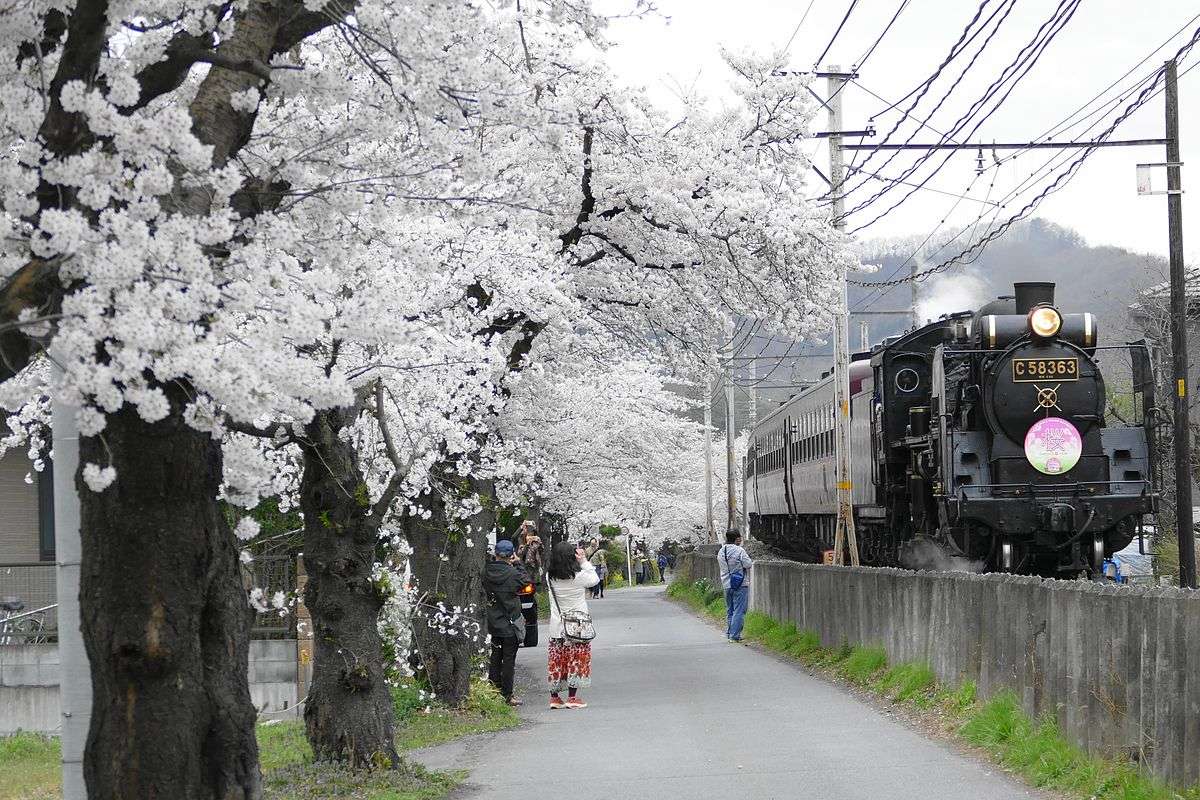 The Paleo Express will take its first run of 2021 on Saturday February 13th. Tickets go on sale from January 15th.

Featured photo of the Paleo Express Steam Locomotive with Cherry blossoms by アラツク is used with permission.

The Steam Locomotive (SL) Paleo Express that runs between Kumagaya and Chichibu is the closest steam locomotive ride to Tokyo. Thanks to the Shinkansen from Tokyo and Ueno stations, it takes less than 40 minutes to get to the Kumagaya station. From there you can enjoy a leisurely ride to Chichibu on one of their locomotives. The steam locomotive, or “SL” as its affectionately known in Japan, was out of commission in 2020 for routine maintenance. The inspections have been completed and the C58363 steam locomotive is good to go again.

The Paleo Express is named after an aquatic mammal, the Paleoparadoxia, that existed in the Neogene period. Remains of the mammal have been found in the Chichibu area. You can see the fossils at the Ogano Fossil Museum or you can see statues of Paleoparadoxia at the site where they were found at Hannya no Oka Park. Currently in 2021 that site has a Doko Demo (Anywhere) Door like from the Doraemon anime.

Shortly after you set off from Kumagaya you are in enveloped in stunning rural scenery. With the hypnotic chug of a steam train on tracks, the feel of the raw power of the engine, the unparalleled scent of SL smoke and the distinctive sound of a SL whistle you will surely never forget this rare opportunity to experience a train journey from bygone years.

On a camping trip to Chichibu to see the Moss Phlox in 2017, I had intended to take my four kids on the SL from Kumagaya to Nagatoro. The train goes all the way to Mitsumine Station, but Nagatoro is the nearest station to Nagatoro Autocamp where we were glamping. My husband was going to drive to Nagatoro station with the camping goods, after dropping us at Kumagaya. In theory we would have arrived at roughly the same time; the train might be slightly quicker. Things didn’t quite go as planned.

We were too late leaving the house to catch the very punctual SL in Kumagaya. Once again, a long awaited ride on a SL has evaded me. I have wanted to ride this particular SL since I first saw it in Nagatoro in 2006. It will happen someday! I want to share the information I collated about the SL ride in the hope it is of interest to others.

The SL train operates on weekends, holidays and for seasonal events, from March to December annually. However, this year, 2021, it will start from February. Possibly to make up for the lower capacity per train due to the coronavirus. In February it will only run on weekends and the Emperors birthday, February 23rd. After that, from March, it will run mainly on weekends with one to two weekday runs a month too.

On the scheduled days it makes just one journey; a round trip from Kumagaya Station to Mitsumine Station. It departs from Kumagaya promptly at 10.10 am on a weekend, 10.12 am on a weekday. Please note it only operates on weekdays for holidays and special events. Dates are provided below in the timetable section. On the return leg, the SL leaves Mitsumine Station at 2.03 pm on weekends, 2 pm on weekdays.

The full trip (71.7 Kilometers) takes about 2 hours and 20 minutes one way as it stops for almost 10 minutes at a few different stations. Between the scenery and the unique experience of riding a Steam Locomotive the journey flies by. There are toilets in two of the carriages. You can buy original bento and goods on the SL. The SL Bento is 800 yen. You can keep the bento cover which is an image of the SL train with the train’s mascots on it. The Pork Miso Bento also comes with a keepsake cover, that costs 850 yen.  Some of the original goods include a train with chocolate in it, Paleo cookies, a SL train and mobile phone straps of the SL’s mascots Paleo-kun and Paleo-chan.

Instead of the steam locomotive in 2020 they had an Electric Locomotive, pictured above. These photos were taken September 2020. I took them at a trainspotting location in the Arakawa area of Chichibu at the Arakawa Roadside Station. In August and September Dahlia grow along the side of the tracks. The photo below is just a local Chichibu Tetsudo train, taken in August 2020.

Please note the Steam (or Electric) locomotive mainly operates on weekends and public holidays only. It only operates on weekdays for special occasions, for example on Saitama Day (November 14th). Often there are special events held by the railway seasonally, such as the ghost train for Halloween. The additional (weekday) dates for 2021 are:

The SL generally runs until the first weekend in December and on December 3rd for the UNESCO Chichibu Night Festival.

You can buy a ticket from one month in advance, to 30 minutes before the train departs, for both reserved and unreserved seats. You can purchase on the day if they are not at full capacity. Only people with a reserved seat are guaranteed passage. The passenger cars are made up of 4 people box seats. During Covid-19 they are only allowing upto 70% of the train’s capacity. You can book a ticket in advance on their website. They have an English PDF explaining how to use the system.

Things to do in Chichibu