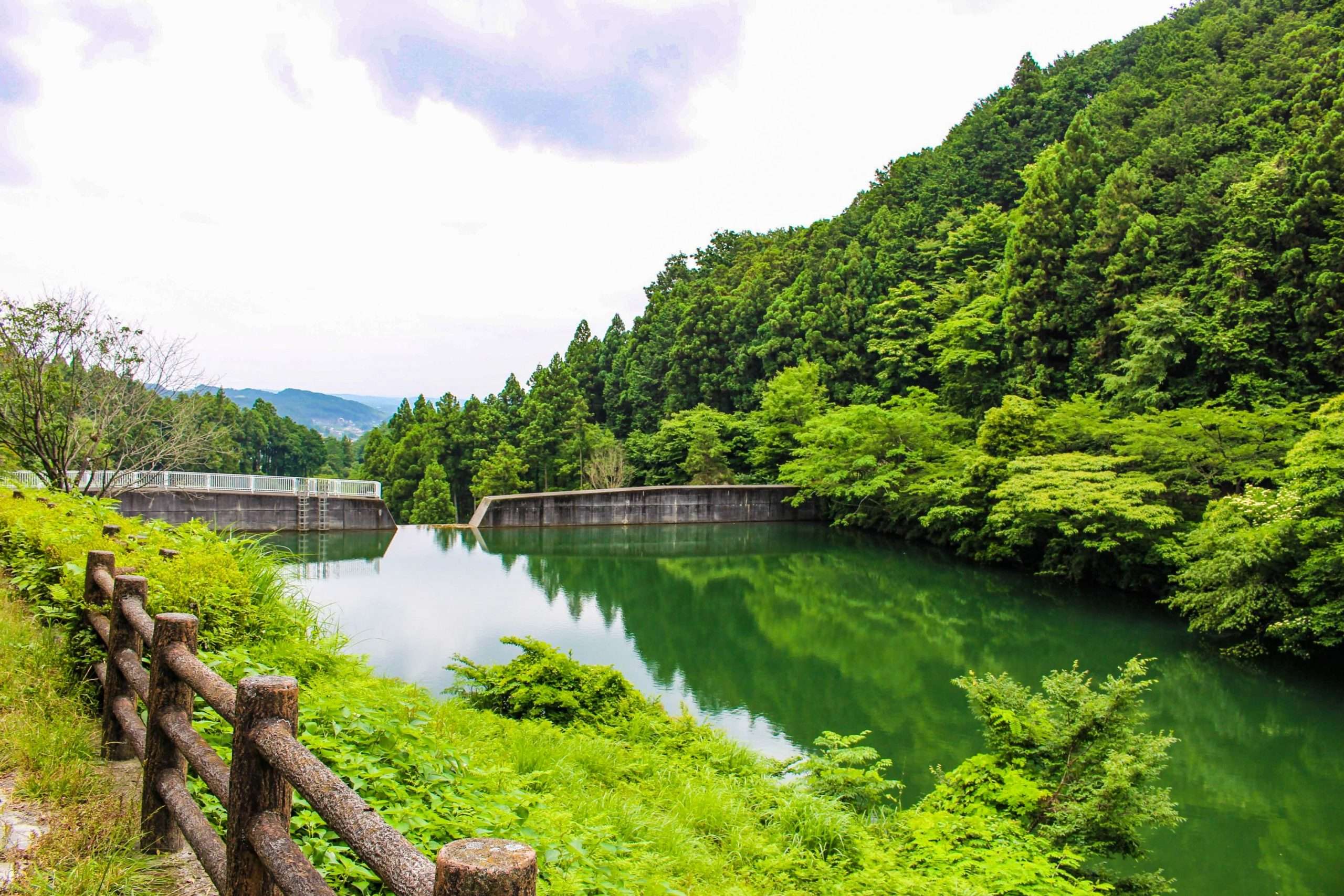 Five year old really wanted to play in some water today. However, most of the water play areas in parks are closed on account of the Coronavirus. It was a blessing in disguise, because instead we went to a Suzumegawa Sabo Dam park with a natural river. My favorite kind!

*Suzumegawa translates to Suzume River. However, even in English the dam and park are most commonly referred to as Suzumegawa.

The dam and park are located in Tokigawa town in the Hiki District of Saitama. Despite the remote location there were dozens of people there today. They were possibly part of some club as all but three of them were painting.

The dam is split into three parts. On the photo above: the area marked in red on the map (on the left) is the “Flower Viewing / Event Square”. The part in orange is the “Observation square” with the second car park and an area with seats overlooking the dam. On the right side, marked by blue, is the “Mountain Stream Square” with wading river and forest walk (which circles the whole park).

You can walk between the three parts, but you can also drive between two parts of the park. Today, we did the latter, because it was a very humid day and the incline on the hiking path and the shortcut by stairs are both quite steep. Moreover, on one side of the park there is a forest, the other side overgrown grass, where mamushi have been sighted recently.

The flower part of the park is at the bottom of the dam. It is called the Ohanami ibento hiroba or Flower viewing / Event space or square. Around the water that trickles from the dam. As such the river here is not that suited to river play as its not fresh water. There are some stepping stones here. Further down fresh water merges with it, but we haven’t gone down that far yet.

There is a car park and toilets. There is also a little stage in this area where they host events on occasion.

The area can normally be used for barbecues and even camping. They have sinks for washing dishes. But apart from that there is not much else. Its a bit of wild camping with toilets being the only luxury! According to the official website it only costs 500 yen per person to camp there. However, you need to get permission from the mayor to either camp or barbecue, at least a week in advance through a form on the website here.

**Please note both the website and the park itself have signs up to say that both barbecuing and camping are forbidden at the moment due to the Coronavirus outbreak.**

They don’t have it on the map (surprisingly), but there are quite a few cherry blossom trees in this area of the park. As well as in the forest that back drops the dam. They generally bloom the very end of March, but mostly early April.

The hydrangea bloom in June, usually around mid-June, which is marginally later than other areas of Saitama. Last week, they had barely peaked through, yet today they were stunning. There are hydrangea all over the park, not just at this zone.

The dam is on a popular cycle course for advanced cyclists. As you drive (or walk*) from one car park to the other the road forks. (*If you are walking you can walk up through the forest too or use this road with caution). The road merges about half way between the lower and upper car park. The fork is just before the road takes a sharp bend on the left to get to the upper car park. If you go right at the fork though it brings you to the Suzumegawa Forest Road. You can actually drive it too. However, it is a very narrow road and if you meet another vehicle one of you will have to back up to where the road is wide enough to pass each other!

The middle part of the park is called Observation Deck. It is where the second car park is. It is overlooking the dam itself. You can walk from there (go right) around to the far side of the dam following a long beautiful forest walk. It goes full circle back to the bottom of the dam where the flowers and camping area are.

There were still a couple of satsuki azalea in bloom today, much to my surprise. They bloom in May with best viewing around the middle of May. There are also beautiful mitsuba azalea, the purple tree type, dotted around the forest walk.

As you go right to walk to toward the forest path that goes full circle of the dam, you will see steps down to an open green space on the left. Here there is a shallow river with terraced steps suitable to paddling your feet. It is here we played today. You can also short cut into the forest by walking through the open space, across the river and up stairs to cut off a bit of the forest walk. Walking down hill will bring you by the dam on the far side of the car park and then on down to the flower / event / barbecue area.

The “mountain stream” is relatively clean and very shallow so it is a nice place for water play with really young children. There is some moss on the stones, but not as bad as some other natural rivers. There is a tap by the car park for washing hands / feet. It has a water drinking fountain too.

The dam park is relatively close to the Hachiko train line, but unfortunately not the station. The nearest stations are Myokaku Station and Ogawamachi station. Both would take just over an hour on foot. You can get a bus from Ogawamachi station bound for Seseragi bus depot and alight at Suzumegawa Dam Iriguchi Bus Stop. The park is an approximate seven minute walk from the bus stop.

By car, the nearest interchange is the Higashimatsuyama Interchange on the Kanetsu Expressway. There is parking for about 20 cars by the flower viewing square. And for about 8 cars at the observation deck area.