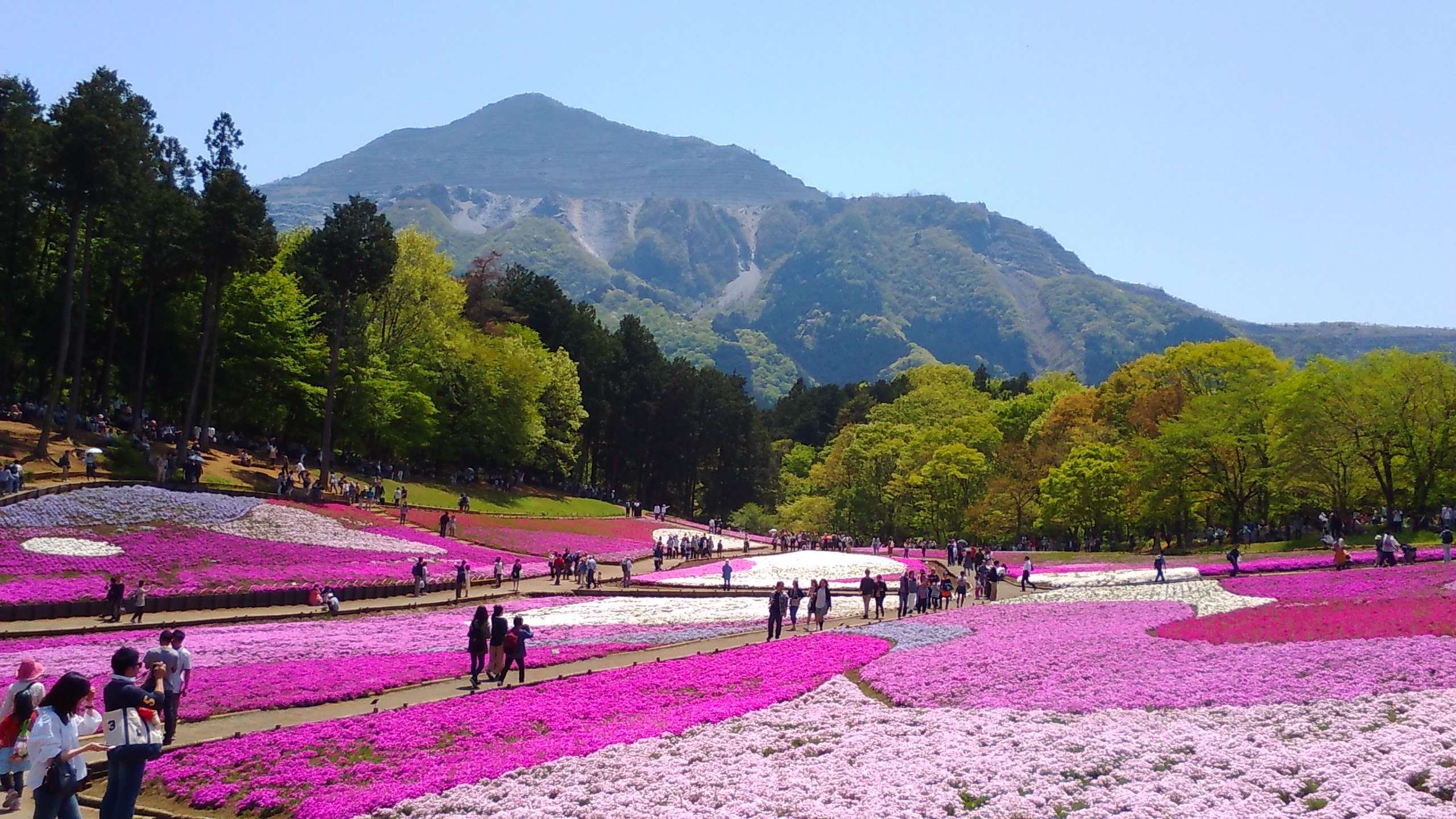 Hitsujiyama Park Shibazakura Chichibu – The renowned Shibazakura or Moss Phlox of Chichibu’s Hitsujiyama Park come into bloom annually in April and last until early May. In 2020 the Shibazakura festival was cancelled due to the Coronavirus. Initially the park planned to stay open for people to admire the scenery. However, by April 12th , the shibazakura hill was completely closed off to the public. The move came on account of the 2020 State of Emergency. In order to prevent gathering of people. Not only was there no festival, you could not see the shibazakura at all.

In 2021 there is no festival, but the shibazakura field is open to the public. The season starts offically on April 16th. But the official website (linked in information section) started updating with bloom and crowd information on April 7th 2021. Hereafter an account of our visit in 2017:

Hitsujiyama Park is located in the hills of Chichibu City. The park is particularly famous for its “shibazakura” fields, a dainty flower of shades of white, pink and purple called moss phlox in English. However, the park itself has a lot to offer and is family friendly. Apart from the moss phlox there are other flowers in the park, including tulips which are also currently in bloom. The park is also known locally for its cherry blossoms.

Beside the moss phlox fields, and included in the cover charge, is the small sheep farm. Hitsujiyama means sheep mountain and was named as you would expect for the sheep in the area. Before World War II the area was a prime prefectural sheep breeding ground. If you are visiting outside of Moss Phlox season all of the park is free in. There is also a riding school in the park and a great athletic playground.

Since the 400,000 moss phlox of nine different varieties were planted in 2000, the shibazakura festival of Chichibu has enjoyed increasing seasonal traffic and become one of Saitama’s most famous spring scenes. We visited on Sunday (April 2017), a couple of days short of full bloom, but standing in the middle of the fields and taking a shot facing Mt Buko you could trick your camera into thinking they are in full bloom!…

If you look closely you can see some of the bare patches, but not enough to leave disappointed. Even though the left side of the center point (photo below), with Mt Buko at your back, is still noticeably short of full bloom. Despite this the kids who were initially more interested in our hike of an old and unused hiking trail in Hinoda, were awed by the splashes of pink, purple and white back dropped by Chichibu’s unusually shaped Mt Buko.

We were lucky that we were staying relatively nearby (Nagatoro Autocamp)  and missed some of the traffic coming into Chichibu. We also used an unknown car park and took an unused hiking trail to get to the top of the plateau. The regular route and car park are frustratingly busy at this time and year and not for the impatient.

We passed the overflow of the overflow car park before 10 am and already there was a queue to get in AND to get out. The traffic around the area was at a standstill and there was just people everywhere. Some coming from the station, some from this 500 yen for the day car park. The second overflow car park is so far from the park that they offer a free shuttle bus from the location to the shibazakura end of the park. However, if you come from the station the distance is just as far and on foot.

I got an overwhelming impression that the Hitsujiyama park management just aren’t able for the thousands that descend on the otherwise quiet park. The whole area was a mess. Apart from having to queue to park and then to get the bus, you then have to queue for facilities such as toilets and eateries. The eating area which is full of stands of festival food is significantly short on seating. We thought we would escape the crowds by eating at 11 am, but there wasn’t a seat to be found, until we met a kind server at an ice-cream stand. He gave us a loan of the chairs he had for his staff to rest.

The shibazakura are truly spectacular and worth enduring the pandemonium especially if you are in the Chichibu / Nagatoro areas. But if you visit during Golden Week it is very difficult to get a photo without people in it. In fact, as people line up along the side of the flower beds, you even have to wait to get a photo at all. Tomorrow sees the start of the second part of Golden Week and the flowers will be in their prime. The crowds will be just as bad, if not worse, than Sunday gone. However, in my opinion, it is totally worth the trip and the waiting game to witness the flowers first hand. If it all possible come by train and arrive for 8 am. (See access below).

The park is open 24 hours, but the car parks and facilities are open from 8 am to 5 pm. If you are using a hiking trail, please note that the area is known for bears.

300 yen for adults, free for children. 250 yen per person for a group of over twenty.

Approximately 15 minute walk from Seibu-Chichibu Station, serviced by the Chichibu Tetsudo, Redarrow (Ikebukuro line) and Seibu-Chichibu lines. The Redarrow is the quickest from Tokyo (Ikebukuro station) taking 1 hour and 28 minutes.

Things to do in Chichibu

Other things to do in the Chichibu District of Saitama, Japan:

Places to stay near the Hitsujiyama Shibazakura festival: